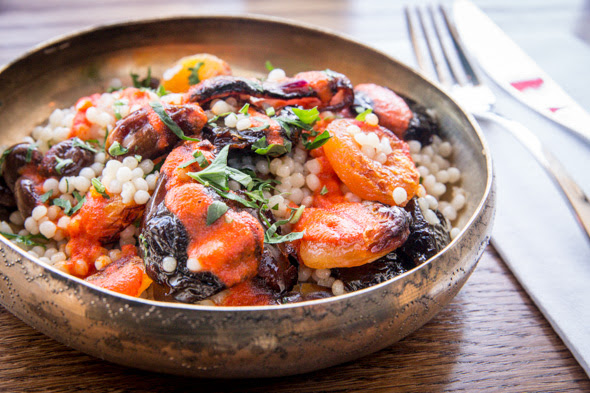 The food trends that dominated in Toronto in 2014 weren't just fickle examples of one-off novelties (I'm looking at you cronuts). These prolific trends found wide-spread popularity, proved their staying power and were embraced and imitated city wide, even as diners, chefs and restaurateurs continued to seek out the next best thing.

It was a banner year for juice bars and the buzzword du jour was "cold-pressed". Encompassing everything from nutrient-rich liquid lunches, cleanses and even almond milks, newly opened operations include Greenhouse Juice Co., Farmacia, The Good Press, Pulp & Press, Evolution Food Co., Fueled Fresh Bar, and the house-brand Au Juice at YamChops.

Harissa and hummus were hot ticket items on menus this year with an influx of new restaurants drawing influence from culinary traditions across the Middle East. Byblos, Rose City Kitchen, Fat Pasha, District Oven, Kadbanu, and Maha's each specialize in various regions while traditional dishes from shakshuka to shawarma appeared on menus at Rasa, Hello Darling and The Beaver (to name just a few).

This wouldn't be news in Europe, but in Toronto it's about time we blurred the lines between cafe and bar. This year saw dinner destinations like Bar Buca, Portland Variety, and the County Cocktail open for business in the a.m., while indie coffee shops like Dundas & Carlaw, Boxcar Social and Bevlab are among a new crop of cafe operating from morning into the night.

Newly opened Louis Cifer Brew Works and Duggan's Brewery joined Bellwoods Brewery and the Junction Craft Brewery this year, and that's just the tip of the iceberg when it comes hyper-local craft brews. 2015 looks even more promising with the imminent openings of Left Field Brewery, Bellwoods Brewery's second location, Kensington Brewing Company and Lansdowne Brewery all in the works.

The popularity of this sub section of premium dive bars kicked off with the late-2013 opening of The Dock Ellis, but seemed to find its footing as 2014 saw openings of The Derby and The Contender crowding into the arena. Packed with screens and sports memorabilia, these new game day destinations are offering fun riffs of status quo sports bar foods with munchies like wonton nachos or meatball hoagies appearing on menus.

Not only did 2014 see new restaurants pop-up inside of already established bars (like say Luther's Chicken inside Churchill, Loka Snacks inside Hi-Lo Bar and Baju in the Monarch), but we also saw new restaurateurs launched multiple concepts per address. Visit Dailo and start with drinks and snacks upstairs at LoPan, or dine at Fat Pasha and hit Schmaltz on the way out, or stop in at Bebop pre-dinner at Pai.

No longer is late-night eating all about fast food chains and greasy slices, kitchens are staying open increasingly late with gourmet eats on offer until at least last call. Thouroughbred for instance is serving up buttermilk fried sweetbreads, chicken liver mousse and Burgundy truffle-topped haute dogs, while Mr. Flamingo switches up its late night bar menu monthly offering gourmet, often seafood-focused nibbles on a theme. The Carbon Bar, Bar Buca, and People's Eatery all deserve a nod too - all have raised the bar when it comes dining into the wee morning hours.

Toronto's obsession with fries, curds and gravy went from being a regretful post-bar binge food to a respectable brunch time option eaten openly in the light of day. In some cases fries got substituted for hash browns or tater tots, but in most cases the transition was complete with just the addition of eggs or hollandaise. Listed alongside pancakes and bennies, find poutine appearing on brunch menus at newly opened joints like; Hello Darling, Mata Petisco Bar, Tavern by Trevor, and Duke's Refresher; as well as at stalwarts like School Bakery and Cafe, Lady Marmalade, Gilead Cafe, and Mitzi's.

Tea based cocktails were prolific on bar menus citywide in 2014 with steeped infusions highlighted by mixologists at places like D Bar at the Four Season where the Early Frost is blended with honey and chamomile-infused gin, and pomegranate Lillet Blanc. Byblos, LoPan and Marben are just a few more that made tea time a little boozier this year.

Sanagan's did it and now the idea has caught on at newly opened boutique butchers like Cumbrae's, St. Andrew's Poultry and Stock In Trade. Aside from the usual prepared foods found at your local butcher, these meat mongers employing their expertise to assemble astounding hot sandwiches that can be consumed immediately.

by Liora Ipsum via blogTO
Posted by Arun Augustin at 9:22 AM