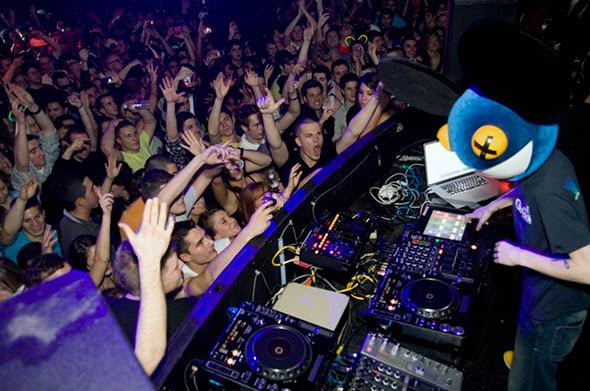 The holidays might have drained your bank account, and maybe you made a New Year's resolution to cut down on some of your bad habits, but there are still plenty of excuses to go out dancing in January. For one thing, it's a great way to burn off some of the accumulated calories from all those festive meals, not to mention how effective a long night on the dance floor can be at combating the winter blahs.

Even if you don't want to spend your winter in dark clubs, Harbourfront is once again hosting a series of DJ skating parties on their outdoor rink. Also, keep in mind that this is your last chance to dance at the Guvernment before the iconic mega-club closes down forever to make way for yet more condos.

Here are my picks for the top dance parties to hit in January.

If you discover when the sun comes up on New Year's Day that you still want to keep partying, Ryze is hosting an all-day after-party, starting at 5 am. Headlining the festival of debauchery is Italian heavyweight Joseph Capriati, known for his epic marathon DJ sets. 5 am, $50.

Deep house veteran Alton Miller has a sound that bridges the histories of Detroit and Chicago underground dance music. His syncopated percussion, soulful chords, and soaring melodies are always a hit with the old school house crowd, and continue to seduce new listeners all over the world. 10 pm, $10.

We knew the Guvernment would be bringing in some huge names before they close forever at the end of this month, and this special appearance by NYC legend Danny Tenaglia is exactly the kind of special treat we were hoping for. Last time he played Toronto he spun for 20 hours, and few DJs can rock a big room like he can. 10 pm, $30.

It's not surprising that Art Department are headlining Coda's first anniversary party, especially considering that the duo's Jonny White is also a partner in the club. The last year has seen some of the best DJs in the world rock the venue's powerful sound system, making it a second home for many Toronto dance music fanatics. 10 pm, $30.

The Guvernment's final closing party is going to be a big one, and it makes sense that Canadian EDM superstar Deadmau5 is headlining, seeing as he played many pre-stardom gigs at the sprawling mega-club. Having said that, we still hope that Deadmau5 keeps his promise to let longtime mainroom resident Mark Oliver play the final hour.

Deadmau5 photo from the Guvernment

by Benjamin Boles via blogTO
Posted by Arun Augustin at 9:51 PM