That time Toronto was buried under half a metre of snow 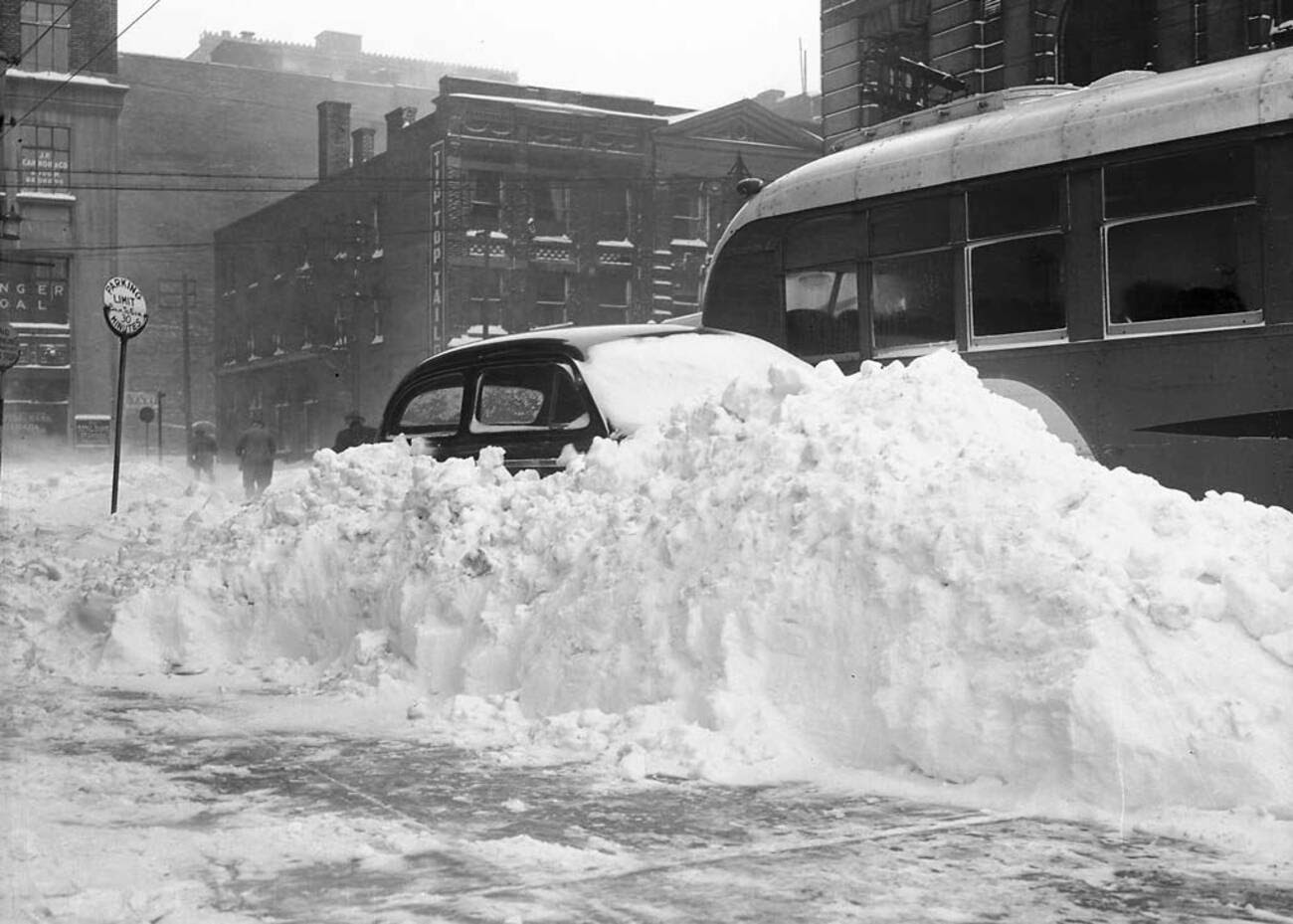 The snow started to fall on a Monday afternoon, as promised. A winter storm whipped up from the Gulf of Mexico was drifting north over upstate New York dumping fresh powder on the the Finger Lakes as wartime Toronto headed home from work.

The Toronto Star weather forecast - "fresh to strong winds; snow, part sleet" - betrayed nothing of what was in store.

The snow picked up and was falling in sheets by late evening. It didn't ease up. Fat flakes driven on the razor wind caused whiteout conditions from Niagara Falls through Toronto and into the Quinte region. With each passing hour the drifts grew higher and more difficult to manage.

The last flight to leave Malton Airport escaped at 1:12 a.m. on the morning of Dec. 12, 1944, moments before the airport abandoned its runways to the storm. Meanwhile, downtown, TTC crews were working in vain to clear the tracks ahead of morning rush hour. 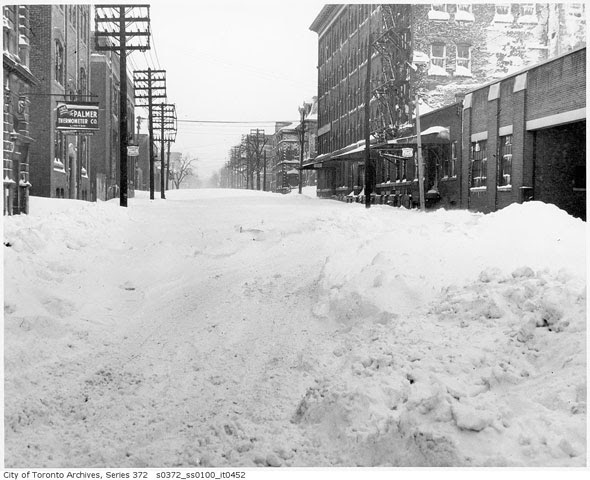 The aftermath of the December 1944 snowstorm in Toronto.

As soon as the tracks were clear blowing snow would flood the void. "Between 5:30 and 6:00 a.m. we figured we had it licked but high winds and drifting snow backed up on the tracks and slowed things up by plugging switches," a TTC spokesman said.

As dawn broke, the extent of the snowfall became apparent to those trying to make their way to work or school, and still it continued to fall. With many streets impassible, some turned to the horse and cart. One woman used a pair of stilts to traverse the drifts at King and Bay.

Metre high drifts were reported on Eglinton and in parts of downtown. Prisoners couldn't make their court dates, funerals were put on hold, and 2,000 people waited in the swirling blizzard at Pape and Danforth for streetcars that would never come.

Eaton's and Simpson's, the rival department stores at Queen and Yonge, were both closed due to the weather for the first time in their histories. The cover of the evening edition of the Toronto Daily Star on December 12, 1944.

It wasn't until the late morning that the heavy snowfall turned from novelty to tragedy.

The bodies lay crumpled in the snow, shovels still in hand. Men expired from the exertion of hauling powder off walks and drives lay undiscovered for hours. Others collapsed in doorways and in office coatrooms.

The evening edition of the Toronto Star reported nine dead in Toronto. "One suffered a fatal heart seizure while shovelling his snow and seven others died struggling through four-foot drifts."

"Some of the victims lay for considerable time before they were noticed in the blinding blizzard," the paper said. "The six telephones in the coroners building, which is also headquarters of the city ambulance service, were ringing incessantly with Herbert Landsborough the only member of staff able to get to the office to answer them."

"The frightening aspect of the death toll is the fear that under the piles of snow, or in the thousands of cars buried under the avalanche on streets and side roads may be more dead, caught inexorably in the blizzard as they might have been on an open prairie." 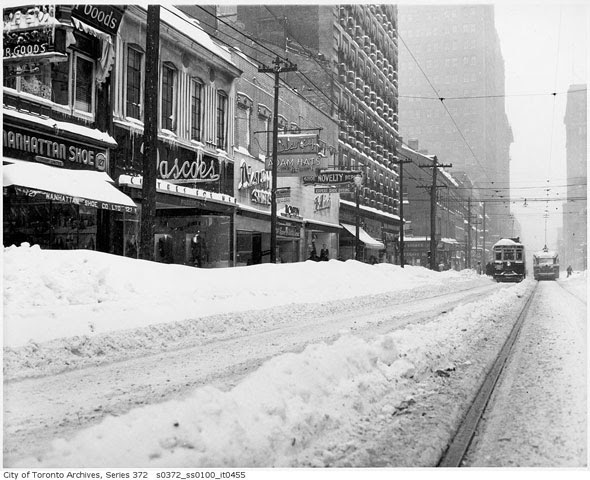 Streetcars travel along Yonge St. after tireless work to clear the tracks.

Meanwhile the snow continued to be a major concern on the roads. In a public radio address, Mayor Frederick J. Conboy urged workers to stay home unless their jobs were essential.

"We want all available transportation facilities to bring war workers and others to their jobs," he told the huddled city over crackling airwaves.

All private and non-essential motor traffic was ordered off streetcar routes by the city's transit controller. Milk, bread, and other deliveries were re-routed to fire stations, which became makeshift distribution points.

Downtown, restaurants, cafes, and movie theatres did brisk business as freezing workers who had trudged through the snow only to find the city shuttered and silent were forced to find somewhere obliging. 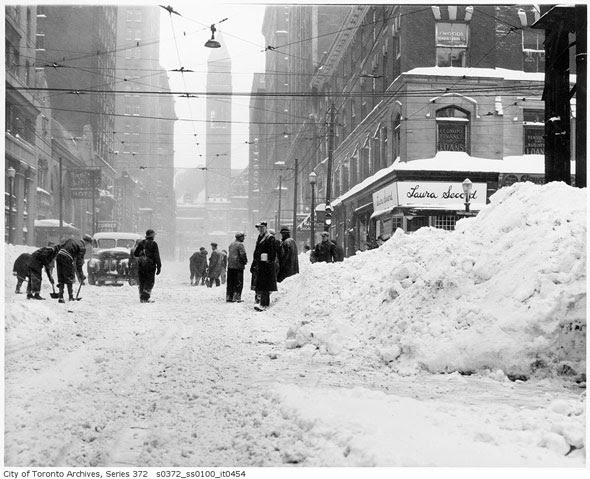 The scene looking up Bay St. following the massive snowstorm.

By morning of Dec. 13, 1944 the situation had only marginally improved. The Ontario death toll had climbed to 18 with incidents in Hamilton, Campbellford, Brantford, and Richmond Hill. At Queen and Mutual a streetcar lay on its side with 170 people trapped inside.

The eastbound car had jumped the rails and tipped onto its doors, sealing a crowd inside. One person was killed and 43 were injured but surprisingly little was made of the incident. A photo and a few lines of copy in both the Star and the Globe and Mail, nothing more.

In fact, despite the unfolding drama, there's little evidence of fear or anger from the people of Toronto in the papers. 1,400 volunteers, some of them boys drafted from local schools, some of them re-purposed garbage crews, helped shovel snow from TTC tracks.

People were "singing and wise-cracking" as they waited on delayed or cancelled public transit, a far cry from what you'd imagine would happen today.

A few skied to work, including Stanley Todrow, who was photographed outside City Hall. It's "just like a sight-seeing tour," he said before toppling over in front of the cameras.

Over at Bell Telephone Co., which was snarled "beyond the capacity of both humans and mechanical equipment" by the volume of phone calls, 310 army cots complete with nightgowns, lipstick, soap, and toothpaste were delivered to the tireless girls working the switchboards.

Few went home - they couldn't - so the army brought them what they needed to take a nap and return to work. "We're prepared to carry on indefinitely," said a Bell official. If the girls were upset, they didn't show it. 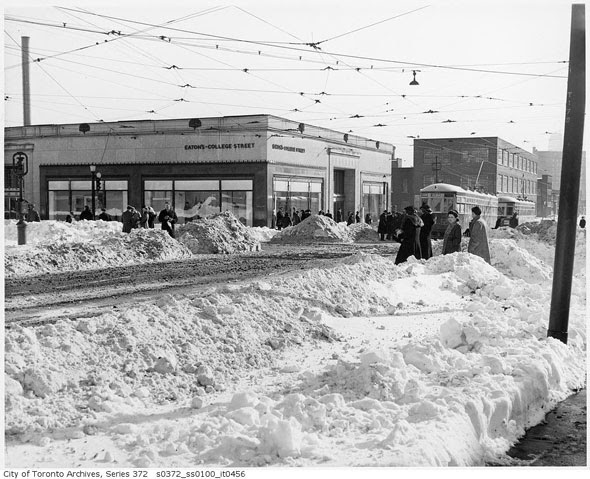 The view at Yonge and College after the snow had subsided.

The snow stopped on Dec. 14, giving way to clearer skies and scattered flurries. The city was "50 per cent of normal" by the end of the week and officials lifted the auto ban on Dec. 15., but it would take days for many side roads to become passable.

21 people died in Ontario as a result of the storm and its monster deluge. The snowfall, a whopping half metre in little over 24 hours, wouldn't be beaten until the storms of 1999.

by Chris Bateman via blogTO
Posted by Arun Augustin at 6:45 AM