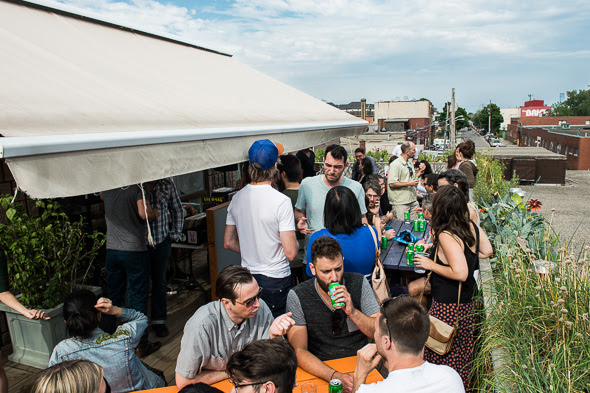 Geary Lane's new contemporary arts and performance space is adding to the unlikely neighbourhood renaissance on Geary Avenue. Over the last few years, Davenport has transformed from a bit of an industrial wasteland near the train tracks to a cool new hub for creative types, and this space lying at the end of the street adjacent to the storied Rehearsal Factory seeks to set itself apart from any other venue in Toronto.

Jason Pollard and Justin Adam, the duo behind the experimental production collective Man Finds Fire, have undertaken an ambitious rebranding of the building, which formerly used an address facing westward on Primrose Ave. Sensing the cultural movement building on the other side, they turned the back entrance into the front door to link up with Geary's growing artistic pulse. 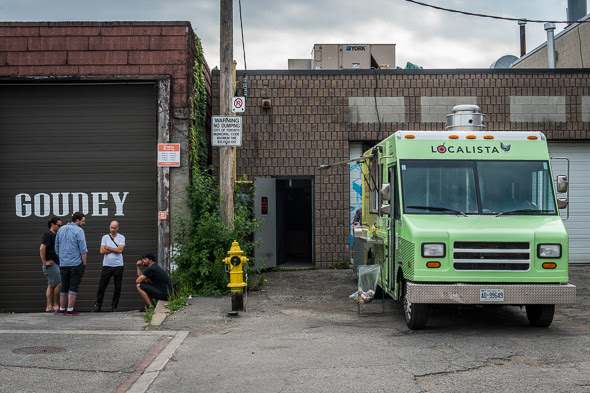 Though the venue will continue to host film productions and still serve as a home base to Toronto's Samba Squad, a variety of avant-garde performances and visual spectacles are planned add an exciting twist. 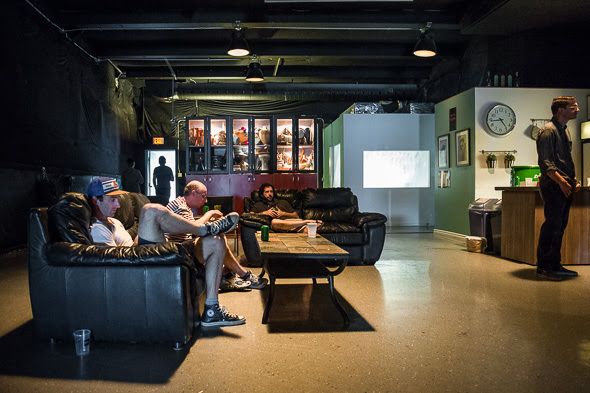 I visit Geary Lane on a Saturday afternoon for their official grand opening: a daytime "BBQ" and open-house concert. It's an odd time to swing by a place like this, entering off the sun-washed street into a dark and moody studio. But that's indicative of the kind of vibe Pollard and Adam want to create; the early hour and open-door policy encourages friends to bring their kids today, creating a familial mix of patrons. 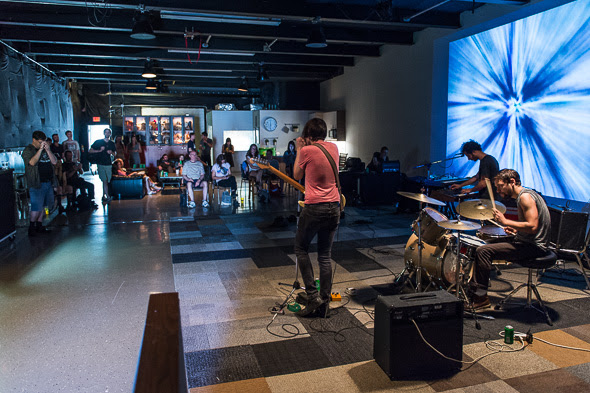 Pollard and Adam first met while working at The Drake Hotel, and it's clear their former workplace has influenced the design of Geary Lane. Boutique touches are everywhere: Tiffany-blue walls adorned with black-and-white photos, ultra-luxe installations in the bathrooms. "We've put on our share of shows in dank, dingy basements - don't get me wrong, those have been some of my favourites," Pollard explains, "but with this place we saw the opportunity to showcase acts somewhere more refined and accessible." 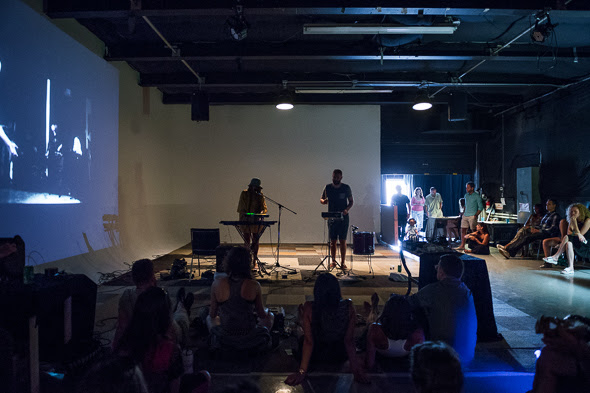 The central part of the space is an open floor surrounded with a massive white cyclorama for projections. A couple of plush leather couches and coffee tables in the sprawling space face a large carpet where musicians set up to perform. Pollard tells me it was important not to create a distinct elevated stags - they loathe boundaries between artist and audience.

The bands today range broadly, from the soulful r&b of Montreal's A K U A to David Shelley (Treeotica)'s ambient manipulations, to violent noise improvisations co-produced by Adam. 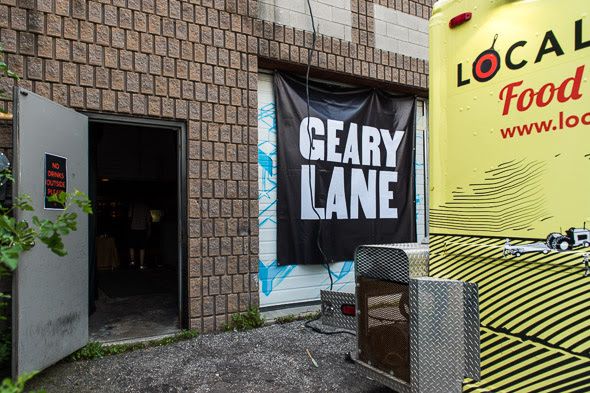 Behind a display case filled with traditional percussion instruments, there's a small "makeup room" that's been fashioned into a secondary performance space for sound between sets. Beside that is an office, also transformed for today: multimedia artist Petra Glynt has erected an art installation inside with a clinical assemblage of latex-glove hands imprinted with the phrase, "WE'VE TOUCHED EVERYTHING." Visitors can crawl inside and take photos. 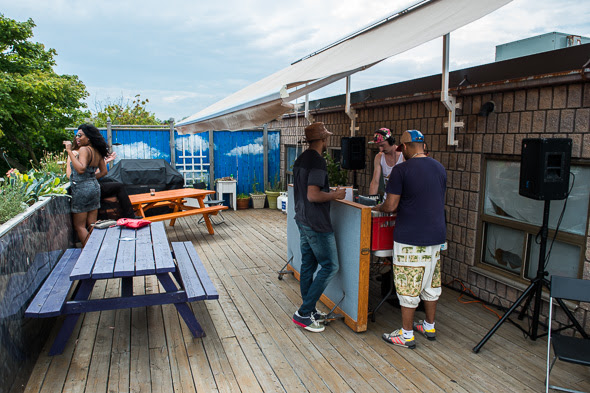 Walking through a back hallway and up a flight of stairs brings me to a rooftop terrace, perhaps one of the most attractive features of the venue. Another nod to The Drake (specifically the Sky Yard) - a litter of coloured picnic tables on the deck are partially protected by a canvas awning, and a planter spans the entire terrace edge blooming with fresh sprigs of kale, capucine and herbs; flanking the left end is a patch of green that will soon be developed into a full vegetable garden. People casually chat while the DJ spins low-key tunes. 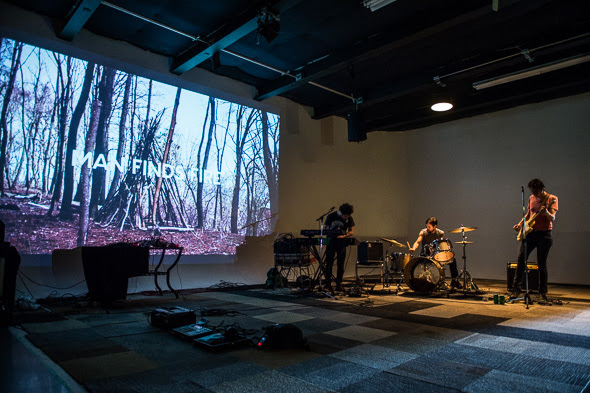 Judging from today's roster, it's clear that Geary Lane isn't intended for a specific genre or type of performance. The ethos of Man Finds Fire is open-ended, with a lean towards the unexpected; artists that aspire to push boundaries will be welcomed here, and Pollard is excited to give the public a more accessible gateway to Toronto's artistic underground.

"Man Finds Fire was born as a nomadic concept that wasn't location specific, but right now, we're eager to see where the partnership will go at the space. We may continue on there for years to come if the conditions are right." 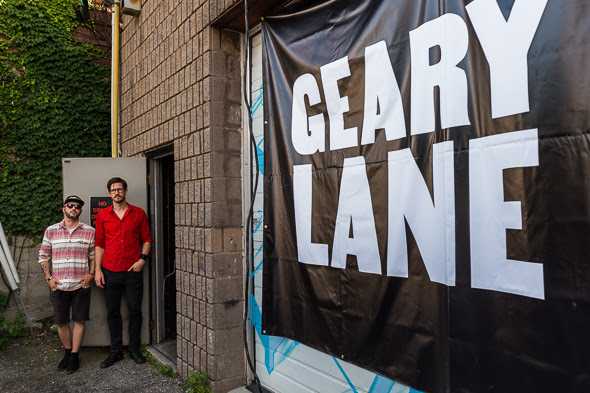