Music open mic nights in Toronto by day of the week 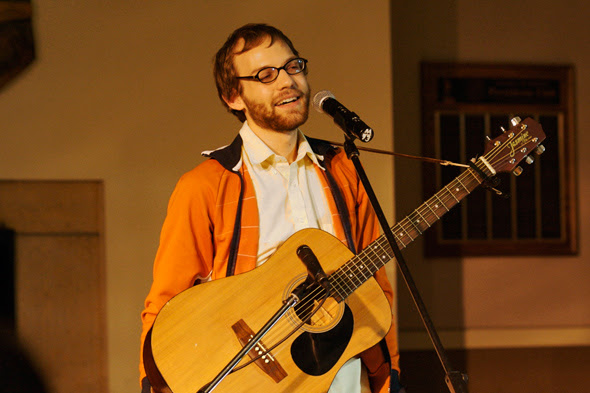 Music open mic nights in Toronto lead us to 1967, a historic year in Toronto history. The Leafs last - ahem, that is, Fat Albert's first hosted its open stage in the Bloor St. United Church in 1967, and except for a brief lockout over rent issues, and venue change to the United Steelworks building, continues weekly.

There have been no shortages of open mics since the first Fat Albert's with new open mics starting across the GTA (and some closing). They continue to be starting places for emerging artists, a chance to hone new songs, meet new people, for audiences to listen, and for some, be part of a community.

To help you keep track and achieve your dreams of stardom - or of discovering a diamond in the rhinestone ruff - here's a list of ongoing open mic / open stage / open jams for musicians by days of the week. Some series refer to themselves as open mic, with others as open stage, and open jam generally referring to a full band format and genre specific. Times listed generally reflect sign up times (at the date of this posting).

Karaoke nights in Toronto by day of the week

The best karaoke bars in Toronto

10 under the radar folk, blues & roots venues in Toronto

The top 10 rehearsal studios for music in Toronto

The Freefall Sundays open mic/jam is easily one of the busiest not only on Sundays, for any day of the week. Performers get two songs with a featured artist every week. The Supermarket has a quality backline of house keys, drumkit, and amps (courtesy Long & McQuade). There is a pre-list sign up on Facebook that opens up at 5pm stating "the prelist is now open" and at 7pm, performers claim their spot in person in the order of commenting.

This open stage has been running close to, if not 30 years (Free Times opened 1980, with music around 1984). With a strong regular attendance, performers are encouraged to arrive on time for sign up. The venue acoustics are excellent for singer-songwriters who enjoy a listening room/audience. After 30 years, the open stage has been a launching pad for Ron Sexsmith, Sarah Slean, Jory Nash, Glen Hornblast, Jason Fowler, Liam Titcomb and more.

East end performers will find a few options on Tuesday for dropping in open stages. They'll find resident musician, Jennifer Brewer, hosts the Old Nick Pub at Danforth and Broadview every Tuesday. The Old Nick has that old watering hole atmosphere, and is a welcoming supporter of emerging musicians. The stage fits solo acoustic performers best and generally all genres.

The CUJ has the unique title of being the longest running uke-centric open jam - likely anywhere in Canada. On three of the regular Wednesdays of the month, find a uke workshop, group jam, then open stage - seven people sign up in advance. The remaining night is a theme night (think event night or artist cover night) with a longer open stage. The CUJ brings out a diverse community of performers and listeners.

Running for about 5 years now, this open mic was previously hosted open mic mainstays "Uncle" Herb Dale and Fran McCann. Brian Donkers and Jay Pennell are the current hosts. Dave's boosts bottle selection, but a small menu. Most open mic nights sign up fill up quickly. Folk, blues, jazz genres are welcome in solo or small band, and a partial kit and upright piano are available. Regulars will be glad to know, after health issues, Uncle Herb has briefly resurfaced musically elsewhere.

Every month Catweazle promises a special and unique show including an open stage. The show is based on Catweazel (a club-slash-show-slash-format) in Oxford that has the feel of a house concert. High level performers engaging an audience, is something magical each time. As with many house-concert style shows, totally acoustic (well, there's a Roland keyboard).

Rebas open mic has moved venues a few times and finally settled at Full of Beans on Dundas in Little Portugal. Full of Beans has a number of fair trade coffee blends, in-house made snacks, and weekend music, including their Saturday open mic. The open mic is a mix of emerging (many local area residents) artists, and some more established. This one's generally only for solo or duo acoustic acts, as the sound system supports only that.

by Staff via blogTO
Posted by Arun Augustin at 10:34 PM