That time when an Alice Cooper riot rocked the CNE 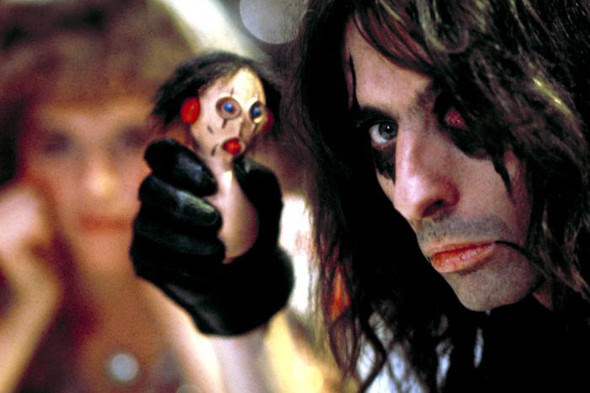 August 19, 1980: Picture 13,000-plus heavy metal fans milling around Exhibition Place Grandstand, drunk, high and simmering on a muggy August night. They have already endured a torturous 30 minutes of noodling from Toronto-area progressive rockers Zon, and then an additional 90 minutes of roadies setting up for star headliner Alice Cooper's "Welcome to my Nightmare" tour, as the house lights raised and dimmed ad nauseum. Someone appears to announce that Alice Cooper is running a little late due to lost luggage at Pearson.

Storm clouds begin to roll in and the temperature spikes; the crowd is anxious, and the stadium is a foggy hothouse of pot and tobacco smoke. Something is amiss. Rumours swirl that the Godfather of shock rock ain't coming out. At 10:05pm, Cooper's lead guitarist Dick Wagner takes to the stage to confirm that Alice won't, in fact, be attending the show tonight, but Zon would be more than happy to come back out and play some more space jams. What could possibly go wrong? 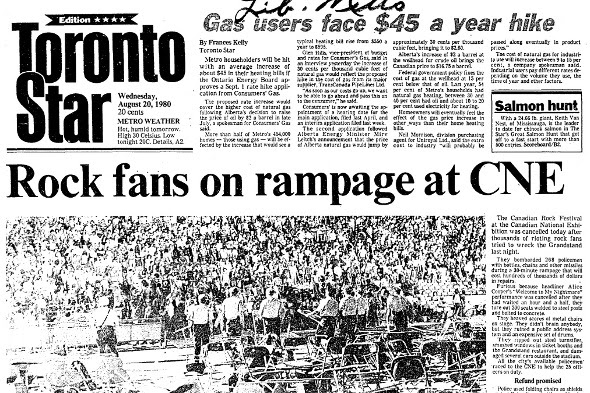 Before Wagner had even finished his ballsy peace offering, chairs and stubbies started flying and the tinderbox of pissed-off metalheads exploded into a frenzy of pent up violence. With only 25 or so policemen and Exhibition Place security staff on hand, a crackle came over the radio for all available Toronto Police officers to proceed directly to the CNE - the great Alice Cooper riot of 1980 was in full swing.

For roughly 30 minutes, the Grandstand became a pitched battleground. Mounted police were the first to arrive, storming the floor area of the stadium and pushing the chaotic mess of Canadian tuxedo-wearing fans towards the opposite side's exit. While chairs and bottles rained down with escalating urgency, fistfights began to break out as crowds heaved away from the mounted units and came dangerously close to being crushed. As more police arrived, troublemakers taunted them to draw their weapons and made sport of vexing them at every turn.

As the rowdy scrum exited the stadium, it became open season on the CNE midway as stalls were looted and food trucks tipped. A defenceless 511 streetcar was even ransacked by a breakaway mob.

In total, 12 fans, five policemen, and a security officer were seriously injured in the melee, and 31 people were arrested. The Toronto Star reported: "Thousands of rioting fans tried to wreck the Grandstand last night. They bombarded 268 policemen with bottles, chains and other missiles during a 30-minute rampage that will cost at least $175,000 to repair. They tore out 200 seats welded to steel posts and bolted to concrete. They ripped out steel turnstiles, smashed windows and ticket booths and the Grandstand restaurant, and damaged several cars outside the stadium".

Public outrage followed the next day as the city awoke to news which pretty much confirmed Alice Cooper and his ilk were the spawns of Satan. The Star quoted concert attendee Greg Delaney, 18 of Halifax, who proudly boasted: "I hit a cop on the head with a chair. It was really great. He gave chase but didn't catch me. Concerts aren't any fun if you just sit there and listen to the music. You gotta make things happen!"

Toronto was still reeling from a summer of rock concert discontent: In June, a mini riot of 400 youths assaulted police and destroyed cars when they were denied entrance to a Teenage Head show at Ontario Place. The previous month saw subways cars and a station attacked by youths leaving a Nash the Slash concert at the same venue.

Things returned to normal fairly quickly. Three nights later, Burton Cummings opened his show at the Grandstand (the first since Alice) by saying "Yes, there will be a show tonight". Local rock band Moving Targetz, who had been in attendance at the fateful Cooper riot, even wrote a song about the incident entitled "Fly to a Flame" which featured samples of the crowd they had recorded in situ. While many suspected Cooper's non-appearance was due to a drug or alcohol related relapse, his biography stated it was a severe asthma attack.

Riots at concerts have always been a fairly common occurrence, but nothing quite like it had happened in Toronto before that sweaty night in August when Alice Cooper welcomed us into his nightmare. 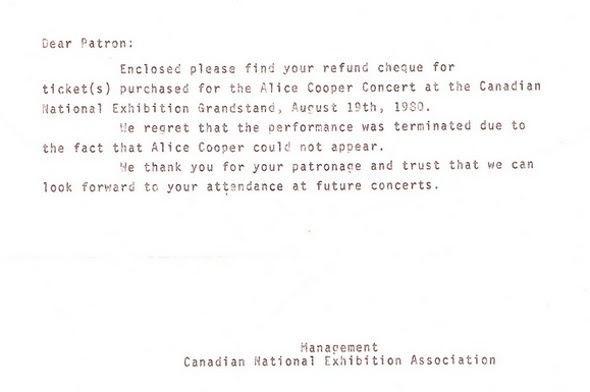 Retrontario plumbs the seedy depths of Toronto flea markets, flooded basements, thrift shops and garage sales, mining old VHS and Betamax tapes that less than often contain incredible moments of history that were accidentally recorded but somehow survived the ravages of time. You can find more amazing discoveries at www.retrontario.com.

by Ed Conroy via blogTO
Posted by Arun Augustin at 9:03 PM