The top 10 glasses and bowls of punch in Toronto 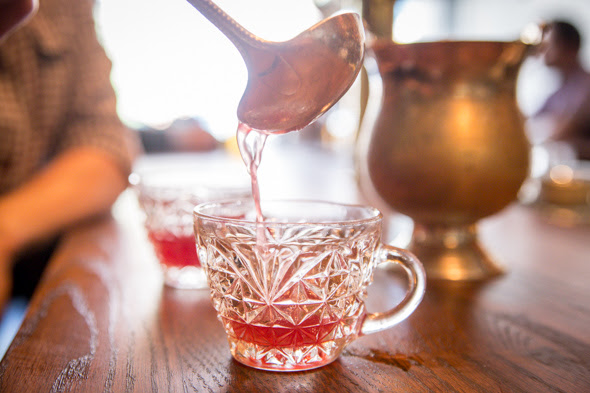 Punch in Toronto is yet another recently-revived cocktail trend - right alongside Tiki drinks and slushies. The benefits are obvious. The drink is prepared in advance, with the flavours given time to macerate (preferably overnight), creating a delicious beverage that is easy to serve. Punches can be presented as an individual serving from a master blend, or as a drink for several people to share at once. Now that summer is in full swing, expect to see many more punches on menus as the harvest intensifies, creating a veritable cornucopia of fresh local fruits to brighten up any cocktail list.

Here are my picks for the top bars and restaurants at which to drink punch in Toronto.

This East Coast comfort food haven in Leslieville only just opened its doors, but have already gotten on the punch train, with a house punch bowl ($21 for 2, $35 for 4) served in a small silver vessel and ladled into crystal cups. It's a blend of gin, vodka, port and rum with grapefruit juice and chamomile syrup.

Chanel Wood's drink offerings at Harbord's new Middle Eastern spot include a glass from her gigantic punch tank. Bolted onto the wall, it could pass as either a big punch bowl, or a neat way of offering a cocktail on tap. She says it's the former. Expect the prices to fluctuate with the ingredients, which, knowing her cocktails, will feature all manner of seasonal herbs and fruits.

Presented in a gigantic one litre mason jar, the County Rum Punch ($23) looks like a jumbo version of one of their individual cocktails, though it's designed for sharing between two or three people at one of their cosy tables. Fusing white and dark rum with mangoes, strawberries, orange,pineapple, lime, and grenadine, it's a boozy affair, not unlike a gigantic Navy Grog. Also available is a giant bourbon cocktail with fresh cherries and ginger ale, aptly named the Washington Monument.

The Fish House Punch is one of the oldest punch recipes still in use today, originating from the Schuylkill Fishing Company men's club, one of the oldest men's clubs in America. A heady mixture of dark and light rums with brandy, brown sugar, and lime and lemon juices, this boozy tipple has been enjoyed by some of the most prominent men in US history. Jay Myers' version ups the fruit by switching out the brandy for apricot brandy.

Queen West's Barchef has been championing the art of fine punch service for quite a while, and offers four different versions at all times. Fifty bucks gets you a small bowl, containing four to six servings, while ninety will score you the large bowl, which should serve between seven to ten. The herbaceous and floral Summer's Eve is an excellent way to start a night out, with vodka, elderflower presse, chamomile, cucumber, watermelon, soda, basil, and mint.

Wes Galloway's beautiful drinks at Byblos don't stop with the delicately spiced cocktails crafted to complement the middle eastern food on offer. He also produces a punch of the day, the market-priced "Flowing Bowl", designed to cater for anywhere between three to six people at a time. Though the recipes change every day, his ornate antique punch bowls and cups merit a visit by themselves.

Though you might not expect it from a dedicated ping-pong bar, there's actually pretty decent food and beverage options at this King West hangout. They offer three different punches, all requiring a minimum of four people for an order. The Wimbledon ($52) is basically a gigantic Pimm's Cup made with cucumber, mint, lemonade and fresh fruit.

Daisho and Nikai offer three different punches, all at different sizes and price points. The Citrus Zinger ($70/$110) will serve either ten or nineteen drinks, and combines gin with citrus fruits, raspberry, and pineapple. The Darling Club Punch ($90/$150) will get either twelve or twenty three drinks, and contains vodka, jasmine, apricots and cognac. Finally, the Purple Drink ($80/$130) serves eleven or twenty two drinks, and is a mixture of rum, blueberry, vanilla, and lemon.

Although not commonplace in the summer months, milk punches are surprisingly refreshing on a hot day They use a boiled milk, which thins out upon combination with acidic ingredients, allowing you to skim the mixture to something much lighter than you might expect. Red Sauce pre-mix the non alcoholic ingredients in their Mango Milk Punch ($9) before stirring with your choice of tequila, white rum, or vodka. Mango is steeped with English breakfast black tea, simple syrup, and boiled milk, and this mixture is added to the alcohol with a few drops of lactic acid for balance. The drink is served with a clear rock of hand-cut ice.

Did I miss any? Leave your favourite place to have punch in the comments. Photo of the punch at Eastside Social.

by Jen Hunter via blogTO
Posted by Arun Augustin at 6:00 AM