That time when Toronto was in love with Niagara Falls 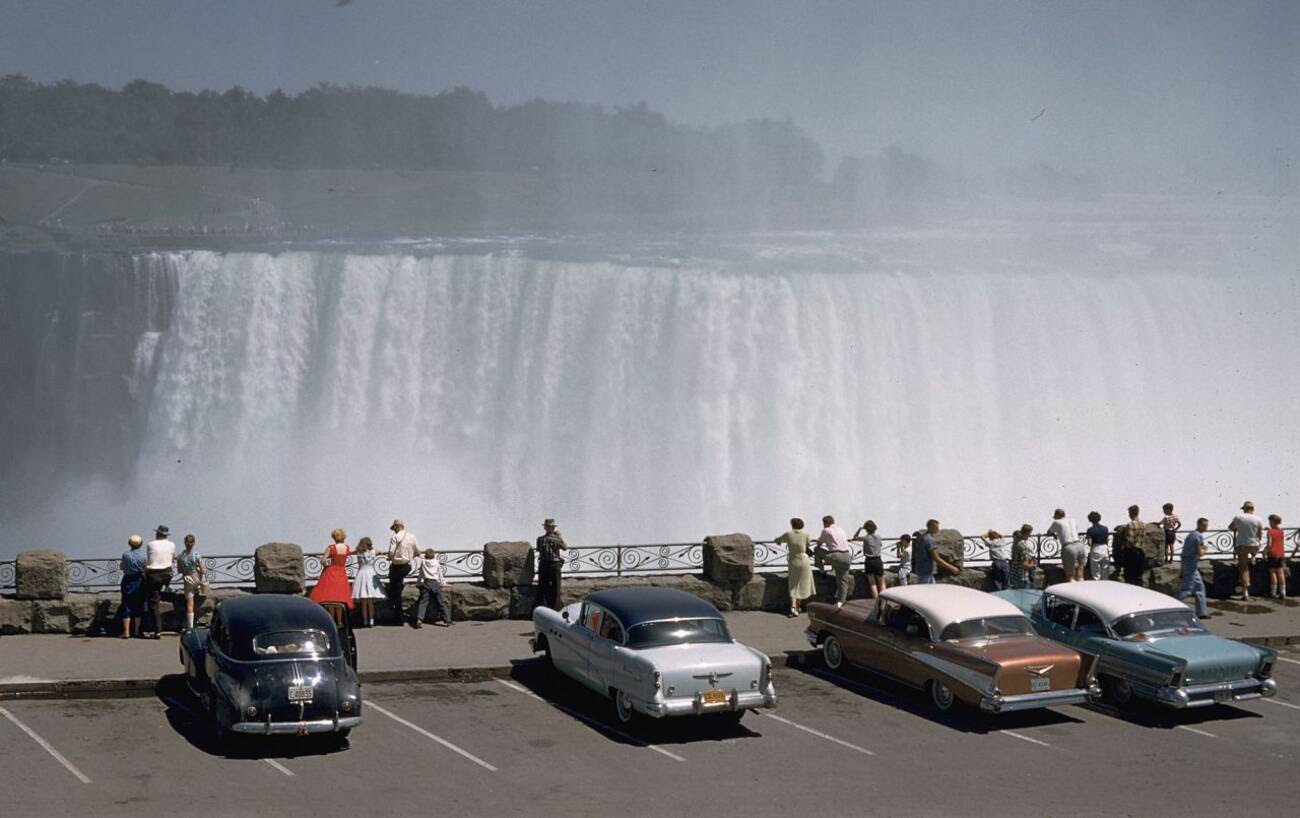 Flying into Toronto from the south across the lake, you might get lucky and see Niagara Falls. You need a west-facing window seat, of course. But if you know where and when to look, you can't miss the Queen of the Cataracts, rumbling away just 50 kilometres from the CN Tower — two wonders of the world separated by half a lake.

Today we tend to look at Niagara with a bit of suspicion. Tourist trap. Motel wasteland. Kitsch paradise. This is a place where the various wax museums seem to spill out into the streets and claim the town in suspended animation.

The heart-shaped jacuzzi tubs are mostly empty now, residual metaphors of a place down on its luck. These days you go to Niagara to gamble, to revive old love in a falls-view suite. And you always come back broke. 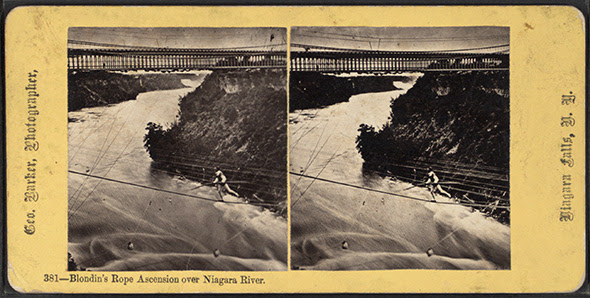 Charles Blondin crosses the Falls. Photo via the Library of Congress.

It wasn't always the case. Toronto has had its eye on the Falls from the very beginning. 50 kilometres and two million litres a second will do that. While the tourist trade in Niagara didn't explode until after the second world war, the city proved a major draw as far back as the mid 19th century.

There were less than 10 hotels on the Canadian side at the time, but Charles Blondin still popped eyes by crossing the gorge in shackles, on a bike and blindfolded. Wealthy Torontonians made sure to take in the theatrics.

Niagara has always been about pomp. And failure. 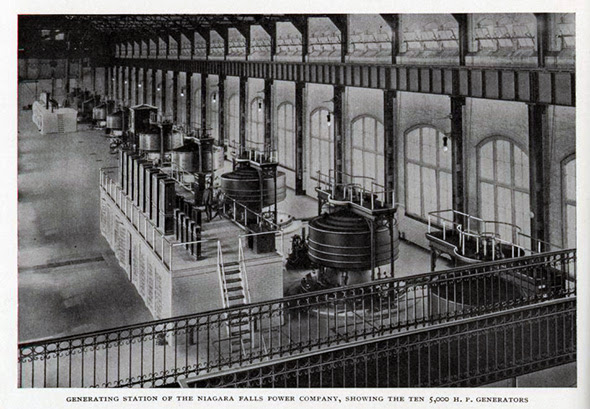 The Niagara Falls Power Company in its prime.

At the turn of the century, Toronto investors helped usher in a modest increase of hotels at the Falls, but the big money was in power. Two million kilowatts of electricity are produced by the Niagara River today, the roots of which lie in the industrial boom the area experienced when someone realized that this natural wonder was a natural moneymaker.

As of 1906 The Toronto Electric Light Company had an outlet tunnel under the Falls that ultimately powered Toronto's transition from gas lights to plug-in electricity.

In 1967, 75 per cent of the North American population resided within 500 miles of Niagara Falls. It was the domestic vacation spot of choice for both Americans and Canadians, but the city's reputation as the place to honeymoon wasn't solidified until after the Depression sent it into crisis in the 1930s.

Mass unemployment in the industrial sector during this period solidified the tourist industry even as the war years would eventually restore factory/power jobs. If Niagara previously had an identity crisis, the tension was mostly resolved by the 1950s. 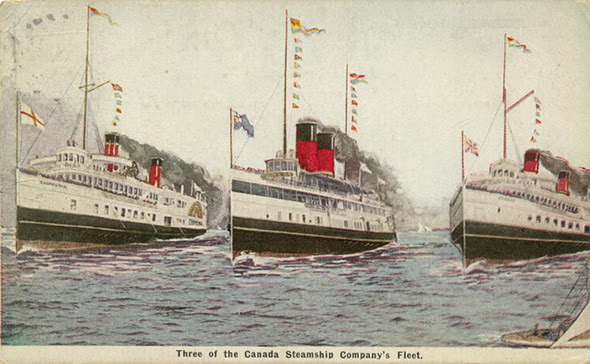 The early steamboats that ferried Torontonians to Niagara-on-the-Lake.

Well before any of this, the Falls were already the place to go for rich Torontonians. At the turn of the century, the Niagara Navigation Company was making six trips a day to Niagara-on-the-Lake from Toronto, from which you could make your way to the main attraction in about an hour.

The Chippewa and the Cayuga were about as grand as Lake Ontario steamboats got, and you knew you had made it when you could take in the lake-breeze from the deck of one of these stately ships. 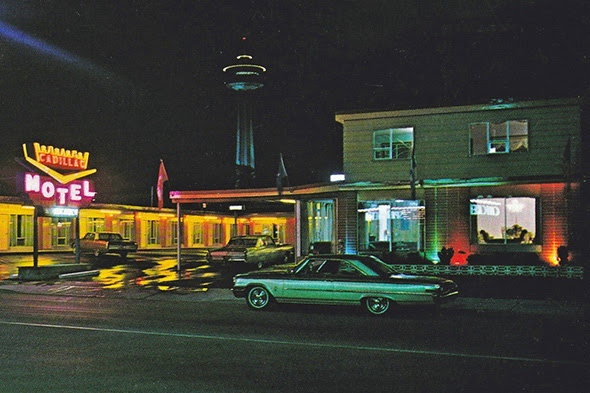 Up until recently, the Caddillac Motel looked mostly the same as it did in the late 1960s.

Fast forward 40 years and the less-monied were taking the bus to Niagara Falls. This was the period when motels went boom. In 1945 there were exactly zero motels in Niagara Falls. By 1955, there were almost 80. 10 years later there were 115.

Less than a quarter of these places remain, but modern Niagara Falls was born during this period, and its remains are still on display in the form of (amongst others) The Cadillac Motel (magnificent but dead neon sign), The White Rose Motel, and the A-1 (triangle-tipped architecture). 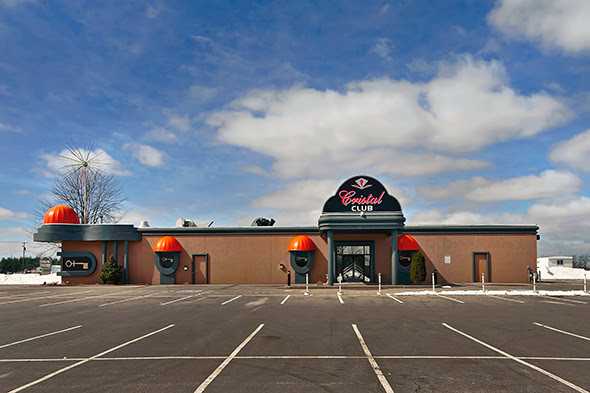 After the fun is over. The Cristal Club on a Sunday morning in the dead of winter.

If you drive far enough along Lundy's Lane, you pass the QEW and things get progressively more sketchy. This is where the strip clubs are. The Sundowner. Cristal Club. Here you rent rooms by the month. This is the residue of the motel boom.

In February it's dead enough that many places just close up shop. But it almost works in the middle of summer. The yellow-hued office lights still glow on a hot night in July, attracting those who've come for the Falls or the casino but can't afford The Embassy Suites and a $52 steak at The Keg.

What is it about Niagara Falls that still attracts us?

It'd be easy to say that Toronto has turned its back on the place, but the numbers tell a different story. The Niagara honeymoon might be dead, but we still make the 128 kilometre journey around the lake with surprising frequency.

The parking lot at the King's Inn is full on a Saturday in the summer. Ontario licence plates proliferate. Some of this can be explained by the casino, but the Falls themselves still exert a pull so many years later. Is there a better place to take a selfie? 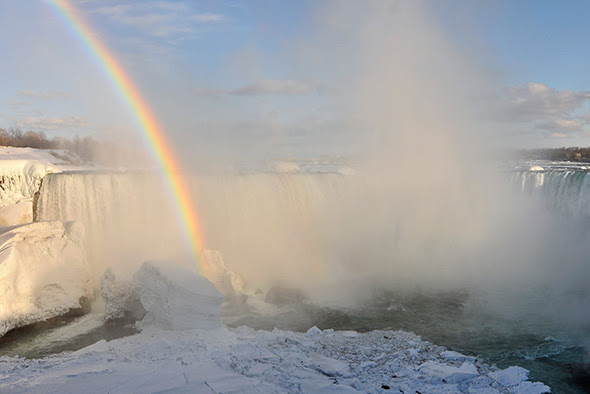 Rainbows and icicles accompany the Falls in winter.

When I was 20, a friend of mine would randomly suggest driving to the Falls late at night. We'd pile into his Hyundai hatchback at 1am and make the hour and half trip just to stand before the waterfall for a few minutes. Then we'd eat breakfast at Denny's and go home. 10 minutes at the Falls. Three hours of driving.

It was never a disappointment.

The allure of Niagara Falls as a tourist destination has certainly waned over the years. Now one should have a healthy understanding of irony to appreciate the place fully. But the Falls are still sublime, and the city remains a place of profound interest for those who don't mind a bit of kitsch and a lot of history.

by Derek Flack via blogTO
Posted by Arun Augustin at 4:54 PM