The most memorable Toronto movies and TV shows from the 1980s 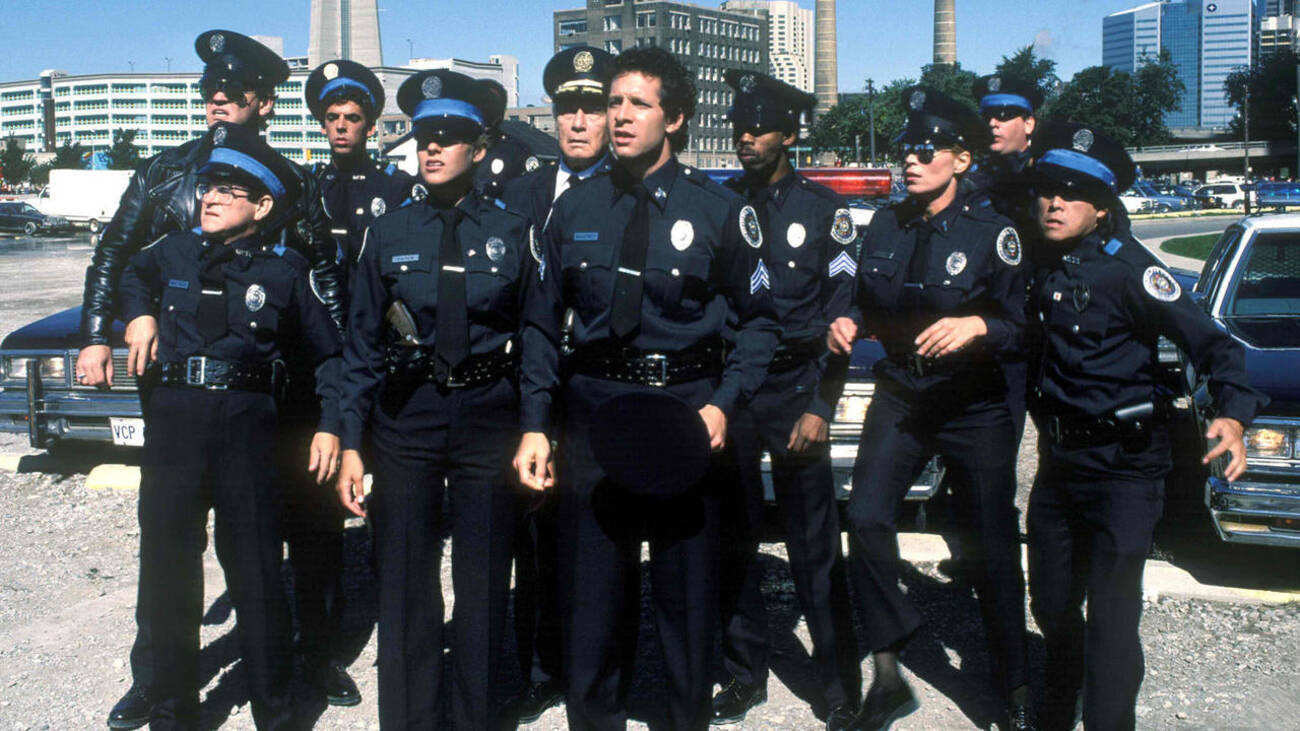 Toronto in the 1980s was a transitional time. The city was expanding but retained a small town vibe, while Yonge street still oozed a junior 42nd Street atmosphere of danger. It was a fun, neon, party-loving "People City."

Film and television production was on the uptick, and beyond just hosting the tax shelter and TV junk like in the 1970s, the city was fast becoming "Hollywood North."

Here are few of the best examples of films and TV shows that perfectly captured this transformation in 24 frames per second, and in some cases showcased iconographic Toronto sites better than anyone since.

Although his adventures technically started at the end of the '70s, it was the early 80s episodes which found the Hobo visiting Toronto on a somewhat regular basis. The highlight was surely a 1983 episode "Ghost Station," which found the titular dog riding the subway (on a Gloucester car, flashing lights and all!) to thwart a diamond thief.

Ground zero for the Degrassi empire (which has endured for five decades, gasp) spotlighted the serene urban suburbia of Leslieville in low-key stories that hold up much better than the more hysteria driven later series.

The Kidnapping of the President (1980)

During a standard diplomatic visit to Toronto City Hall, the President of the United States (Hal Holbrook) is kidnapped by a crazed South American terrorist, and it's up to hot shot Secret Serviceman Jerry O'Conner (William Shatner) to free him and stop the terrorist from blowing up the city.

The grizzled Richard Crenna stars as a detective searching for a sniper icing hookers on the sin strip of Yonge Street. Features lots of great shots of the strip, its multitude of pulsating bulbs lighting up the seedy night, and a few sneaks of the infamous Rio grindhouse theatre. 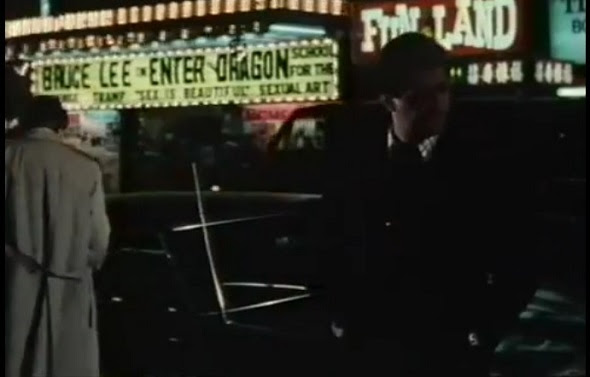 A masked killer ruins that special night for a bunch of oversexed teens. Don Mills Collegiate Institute doubled for the on-screen "Hamilton High School," while the Bluffs appeared in a memorable kill scene involving an out of control van.

Richard Burton pursues a romance with a teen girl nearly 50 years his junior in this ultra-creepy romance set in the Beaches and on the Toronto Island. 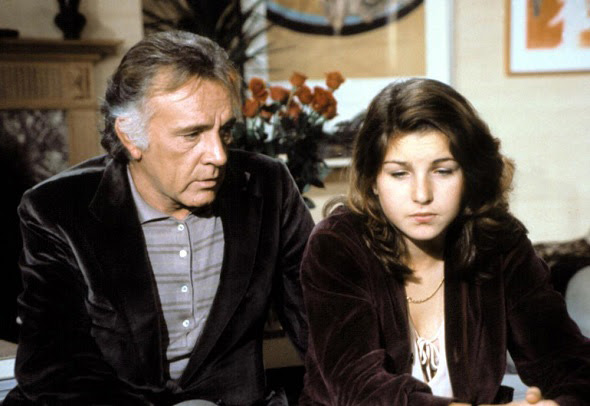 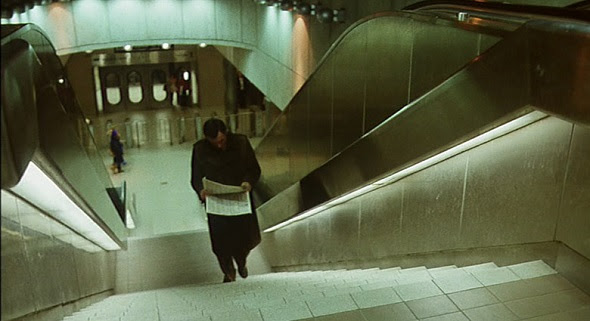 Balding slob Louie Ciccone (embodied by lead actor Louis Del Grande) was a low-rent crime reporter for Toronto tabloid The Gazette who also happened to be clairvoyant. This weird CBC offering was shot entirely on location, and during its run perfectly captured Toronto's gritty '70s hangover before the city cleaned up by the end of the 80s.

Set in Simpson's flagship department store on Yonge street, this legendary TVO kids show didn't venture outside too much - but when they did it was always, ahem, special.

Nelvana's live-action kids-solving-mysteries-through-science show is fondly recalled for its ear-wormy theme song by local rock jock Bob Segarini, but the series remains a picture perfect Polaroid of what it was like growing up in the warm and glowing suburbs of Toronto.

Techno-horror was big in the 80s, and this goofy horror film delivered it in spades with deadly exploding phones. The opening scene alone was worth the price of admission, featuring a poor soul murdered by a pay phone on the TTC.

Giant rats, raised on contaminated corn, terrorize Toronto: first managing to embarrass a local politician during a presser on the importance of Subways, then attacking Spadina's old Golden Harvest theatre in the middle of a Kung-Fu fest.

Lots to enjoy here, whether it's watching Dachshunds and Terriers in rat costumes spray fake blood all over the TTC's abandoned lower Bay Street platform, or trainspotting the use of the TTC's Hawker Siddeley H1s, H2s and H4s

Lots of grim early 80s Toronto scenery to see here, including Central Tech and a performance from the Hammer's finest punk agitators Teenage Head, a glimpse of Sam the Record Man and A&As on Yonge Street, a young Michael J. Fox getting roughed up on Elm Street, while the King of Kensington himself (Al Waxman) turns up as a detective.

Bob and Doug McKenzie transitioned from SCTV to the big screen in this cult comedy which starts with the brothers ducking out of a screening gone awry at the much missed University movie theatre. Lots of retro 80s goodness abounds, whether it's yellow cop cars, the interior of an old Brewers Retail outlet or the skyline in all of its pre-Condo glory.

The Scarborough Bluffs stand-in for a remote African island where a giant rubber snake is poached and brought back to the city, only to eat the King of Kensington (The mighty Al Waxman, slumming it in B-movies again).

There is no record of Toronto in the early 1980s eerier than David Cronenberg's prophetic Videodrome. Not standing in as an unnamed U.S. city here, Toronto plays itself in this splatter-fest that ponders what the hell Moses Znaimer's Citytv (here Max Wren's Civictv) may unleash thanks to its zesty no-holds barred programming. 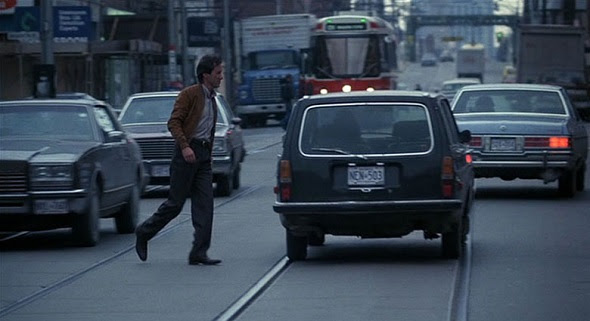 This sleazy peeping tom tale filmed in Cabbagetown was once the cornerstone of all good late-night movie shows.

Local new-wavers The Spoons provided the soundtrack for this ode to 80s TO, which also features a bizarre cameo from Jack Layton as a delirious hospital patient.

Recently given shout-outs by none other than Bill Clinton at the 2016 Democratic Convention, the first 4 Police Academy films used Toronto to fill in for unnamed big-city USA. Highlights include a riot in Kensington in the first film, and Tony Hawk's skateboarding crew thrashing through the Woodbine Centre in part 4. 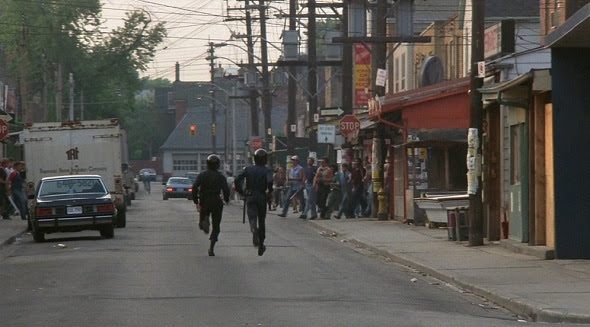 Night Heat never named Toronto as its setting but made brilliant use of the downtown core and all of its noir-ish trappings. The sweaty show immortalized our 1980s skyline in its memorable opening credits, which featured a terse theme song from Domenic Troiano (The James Gang, The Guess Who).

Aunt Agnes minds the kids while their parents re-locate to another city. TVOntario's cozy life lessons series was set in the mean streets of Rosedale (Their house was located on Crescent Road) but covered a fair patch of North Toronto during its run.

1980s hunks Rob Lowe and Patrick Swayze starred in this coming-of-age hockey drama, which shot its climatic finale in the Ted Reeve Arena at Main and Danforth. 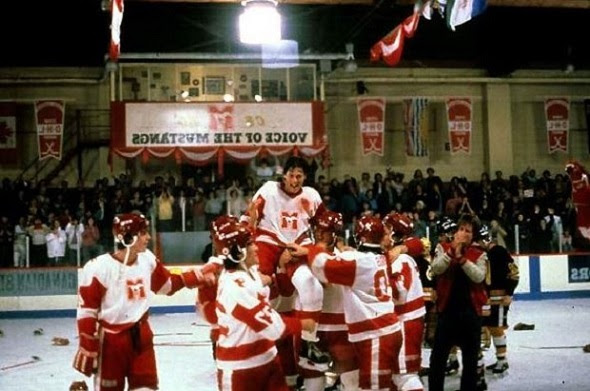 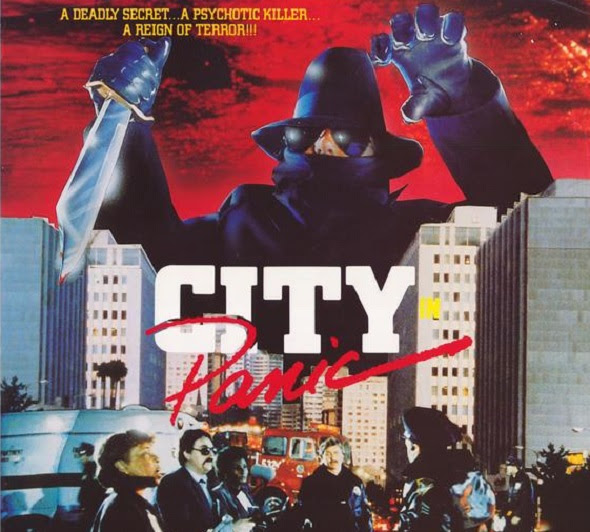 Another horror film with some seriously creepy moments maximized by using the neighborhoods surrounding the University of Toronto, much in the same way Black Christmas did in the 1970s.

David Cronenberg horrifies Toronto again, this time using Liberty Village as the lair of Jeff Goldblum's scientist character who in a rage of jealously accidentally splices his DNA with that of a fly. 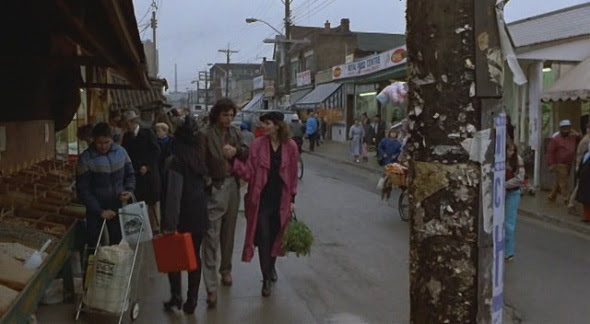 Much revered continuation of the Kids of Degrassi Street further immortalized Leslieville and Queen Street East, with multiple locations popping up in each episode.

Toronto doubles for Chicago in a few shots of this standard '80s VHS-for-a-sleepover title. Dig the Silver Dollar room standing in for a Windy City blues dive (it was also the Blue Oyster in the Police Academy films). 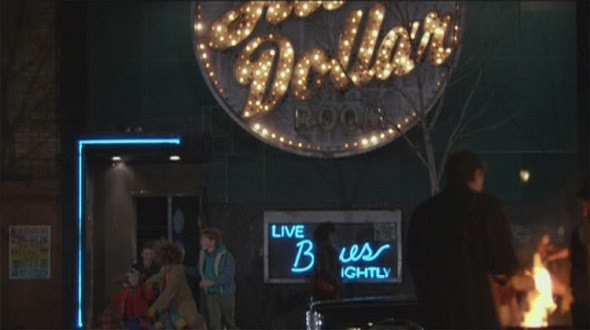 Horror anthology series that had nothing to do with Jason Voorhees or Crystal Lake, rather a creaky old antiques store located in the now posh Distillery district (at the time was perfect for the horror genre.) 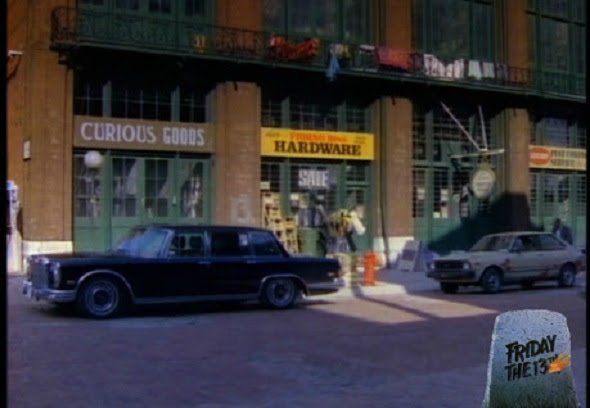 A group of aggressive attorneys traverse the Toronto legal landscape. CBC's soapy drama was considered mighty provocative stuff when it premiered, and its opening sequence perfectly nailed the city vibe (it was updated to reflect changes every year).

Substituting his trademark machine guns and bling for an insightful legal cognizance, Mr. T starred as T.S. Turner, an ex-boxer who was accused of a crime he didn't commit (sound familiar?). Working with his public defender Amanda Taler, T aids wrongly accused criminals in Toronto battle the treacherous legal ecosystem.

Classic 80s guilty pleasure finds the Cruiser at his most charming. Also notable for turning the Don Jail into a supercool nightclub.

David Cronenberg again turns to Toronto as the setting for this psychological horror about two twins (played to perfection by Jeremy Irons). 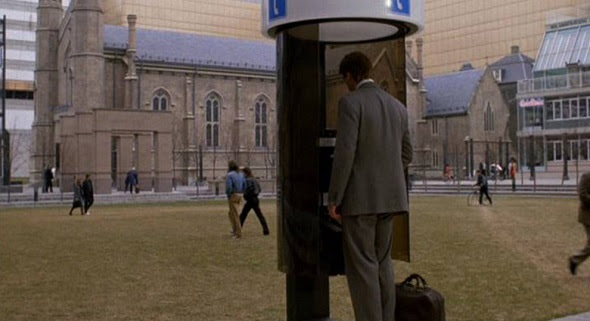 The sequel no-one wanted was so awful even Steve Guttenberg turned it down. Amusing to watch for how ineptly it tries to pass off Toronto as New York - no attempts are made to disguise licence plates, street signs, newspaper boxes, or to even mask the ubiquitous streetcars.

Bargain bin Sci-Fi about aliens abducting a commercial flight then faking its crash at the southwest corner of Major Mackenzie and Highway 27.

A truly bizarre story involving a writer whose villainous character comes to life and steals his floppy disks. Worth watching for a career defining, unhinged performance by Michael Ironside, and a goofy twist ending in front of Sam the Record Man.

by Ed Conroy via blogTO
Posted by Arun Augustin at 8:02 AM