10 free things to do in Toronto this August 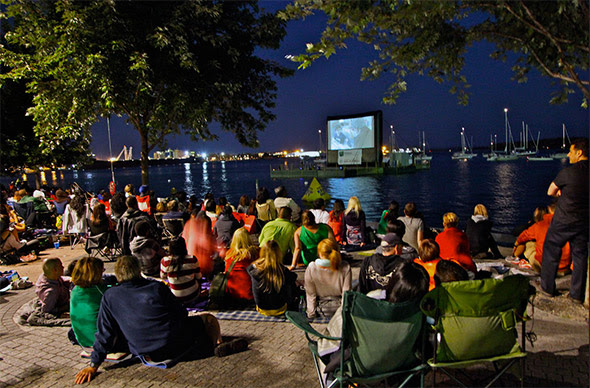 Free things to do in Toronto this August include lots of films and street festivals. Streets are taken over by artists and parks are invaded by movie lovers. This city ain't just for Pokemon Go hunters; it's also crawling with the culturally curious.

Here's what to get up to this August if your wallet is just a placeholder for maxed out credit cards.

Christie Pits outdoor film festival (August 5)
Film screenings that happen on perfectly shaped hills in parks are a perfect summer activity. Especially when they're free and they show some great pre-film content. There's nothing like a night out at Christie Pits for a movie, a coffee, a snack, and some A+ people watching.

Kultura Festival (August 7)
The Filipino culture game in Toronto is on fire. That's why this fest at Yonge-Dundas Square is such a hit. Innovative programming of live performances, traditional and modern cuisine, curated interactive art installations and a bustling marketplace all make for a colourful, free day of fun.

Entertainment District Art Crawl (August 12)
Get to David Pecaut Square for a day featuring 60 talented local artists and designers, food trucks, DJs and more. There will be art to buy and food to eat, and the earliest to arrive will get swag bags.

YouTube FanFest (August 13)
The internet's finest take over the Molson Ampitheatre for one day of YouTube loving. Be warned, last year's first-ever Fan Fest attracted over 15,000 humans to Yonge-Dundas Square, so it's going to be a busy one. See both local and international digital stars in action, including Canadian creators like Lilly Singh, and my fave nerd duo, AsapSCIENCE.

Sail-in cinema (August 18-20)
The world's first two-sided floating movie experience is back! Books to Big Screen is this year's theatrical theme and they're showing a different classic each of the three nights. Bring a chair or a blanket and watch a floating movie on the lake.

Under the Stars: Purple Rain (August 24)
his one can't be missed, as it's Prince's Purple Rain under the stars at Regent Park! It's the final movie in this summer series and because of the film's rating, it'll be shown behind the Daniels Spectrum building in the MDC Donors Courtyard.

TaiwanFest (August 26-28)
The Harbourfront hosts this "cultural tango with Hong Kong." Admission is free to experience music, dance, food and amazingly-cute activities like the Friendship Picnic. All weekend from 6 a.m. to 6 p.m. head down to the water and see what you stumble upon. Check out the official website for the impressive lineup.

CityFest 2016 (August 27)
Toronto artists, vendors, and food trucks, gather in an "art field," "workshops field" and "food alley" for a festival simply celebrating life in the city surrounded by one of it's newest neighbourhoods. Make your way down to Red Canoe Park and hang out on the turf for an easy breezy day of fun.

Toronto Green Market (August 28)
Now that the green outside is very sadly going to start fading away, get inside The Great Hall and learn how to bring it indoors. This is TO's first annual green and eco living and lifestyle market ,which collects the best in eco fashion, sustainable food, natural beauty and home decor. Admission is free, and there will be giveaways.

Did I miss a free event in August you're super excited about? Let me know in the comments.

Photo of the Sail-In Cinema courtesy of the Toronto Port Authority.

by Phil Villeneuve via blogTO
Posted by Arun Augustin at 8:41 AM