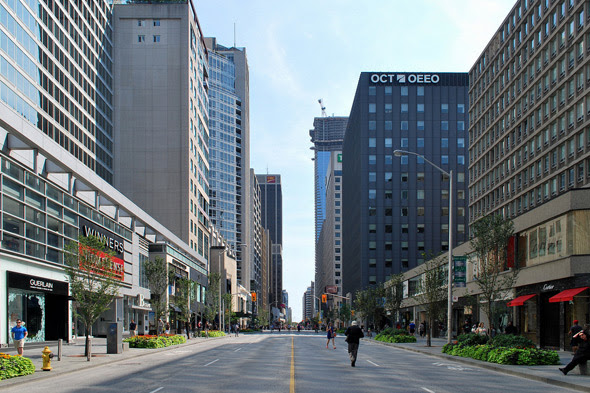 Summer is here and the time is right for dancing in the streets so it's good news that Toronto will be getting more pedestrian-only streets this August and September. It's all thanks to Open Streets TO, Toronto's annual festival that is expanding its footprint for 2016.

Open Streets TO is all about getting people walking, running and biking on our roadways. And for the upcoming pedestrian takeovers, scheduled for August 18 and September 21, the city's car-free network will be expanding east of the DVP.

On both days, Yonge Street will shut from Bloor to Queen, while on on August 21, Bloor will be closed to cars from Parliament to Dufferin. On September 18, this east-west pedestrian-only thoroughfare will run along the Danforth from Hampton Avenue all the way to Dufferin.

That gives you lots of ground to cover as you set out to explore the city on foot.

by Amy Grief via blogTO
Posted by Arun Augustin at 9:58 AM