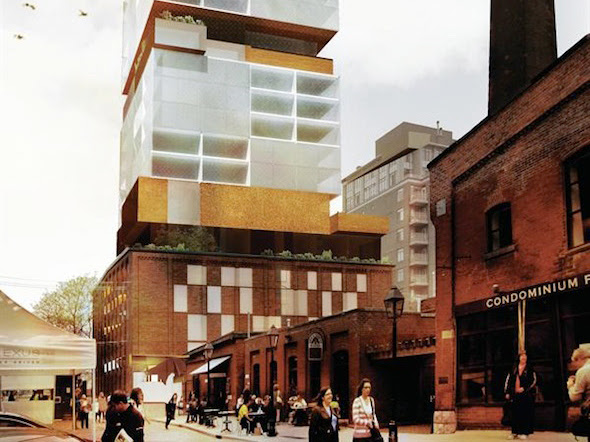 Back in late 2011 a proposal for a 34-storey hotel in the Distillery District made headlines in Toronto for its modern design and attractive address at 60 Mill St. Designed by Saucier + Perrotte Architects, the initial plans even won an architectural award.

Just a few months later, however, the Design Review Panel cited a number of issues with the proposal -- most notably the height of the structure given its context -- and it seemed like the project was destined for the cutting room floor.

The main concern the DRP highlighted in its review is that the Rack House D redevelopment would set a height precedence that would be taken advantage of by lower quality buildings in the future. Following the DRP review, Cityscape Development indicated it still hoped to go through with the project.

Everything went quiet for a number of years until the project popped by up on the agenda at a Toronto and East York Community Council meeting in June. It would seem that in November 2015, the initial "application was appealed to the OMB by the applicant pursuant to Section 34 (11) of the Planning Act due to the City not making a decision within the prescribed timeframe."

In other words, the proposal is back on the table, but this time at the OMB. A pre-hearing was held in August and the formal hearing will take place in March 2017. In the meantime, the city has reevaluated the plans and come to the same conclusion it did the first time. 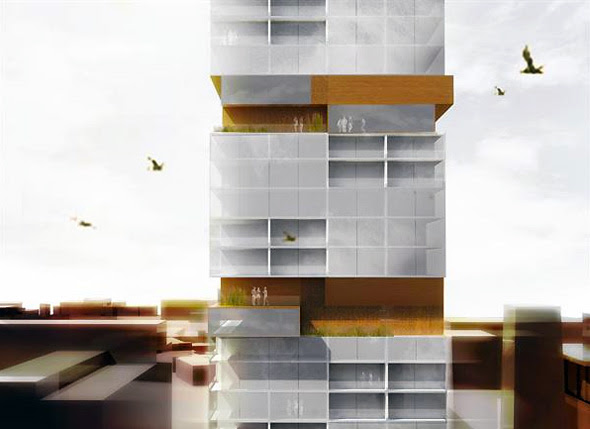 "The height, massing and density proposed by this proposal are a significant departure from
the existing planning framework for the area, where no additions above the heritage building
were contemplated," reads the city report on the proposal.

In a nutshell, the city believes "that the building represents over-development and will negatively impact the heritage character of the Distillery District...and the proposal cannot be supported in its current form."

Further, the Heritage Easement Agreement registered on 60 Mill St. (or Rack House D) stipulates that adaptive re-use is permitted, but no additions are authorized for the building, which obviously runs counter to a massive tower proposal.

What will ultimately happen to the Rack House D project remains up in the air. The OMB is notorious for siding with developers but the city brings a strong case and mandate to oppose the project at the hearing, particularly as pertains to the heritage status of the building.

It's still possible that the developer and the city could reach a compromise before the hearing, but right now the showdown is set for next year.

What do you think of the plans? Share your thoughts in the comments.

by Derek Flack via blogTO
Posted by Arun Augustin at 2:09 PM