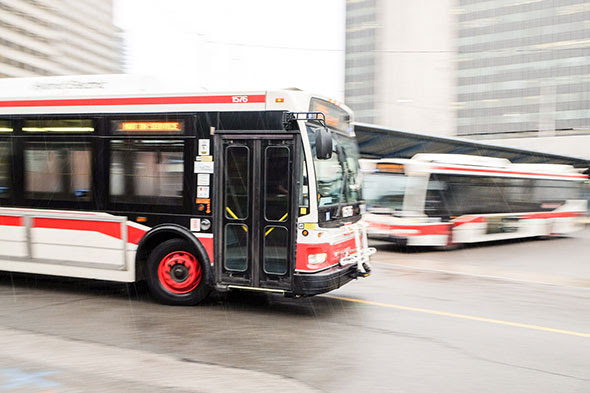 If the TTC's taking too long, many turn to ride-sharing services (i.e. Uber) as an alternative. But now, the city's starting to look into the impact these companies are having on our transit system, writes the the Star today.

Notably, according to a new report, the city's looking at using ride-sharing services to bring more transit options to those in low-density, under-served areas, or places where it doesn't make sense to run a full-size bus.

The report identifies numerous benefits for implementing these so-called microtransit solutions, such as helping people go the "first mile" and "last mile" of their trip (there's nothing worse than walking through a dark, secluded area to get to a TTC stop) and complementing existing TTC services.

Microtransit, as the report says, can also negatively effect on the TTC - it might add to congestion and could even take away riders from the city's streetcars, buses and subways.

"It may be possible for microtransit services to co-exist compatibly with public transit, but it's important, for the economic and social viability of Toronto, that microtransit not significantly negatively affect the city's public transit system nor erode the integrity of the TTC's comprehensive city-wide network," reads the report.

This report, as the Star notes, is going before the TTC board on Wednesday so it's still way too early to tell what the city will do with it and whether or not they'll initiate some sort of microtransit pilot project.

What do you think of microtransit? Let us know in the comments.

Photo by PJ Mixer in the blogTO Flickr pool.

by Staff via blogTO
Posted by Arun Augustin at 11:29 AM