115,000 without power in Toronto as temperature dips 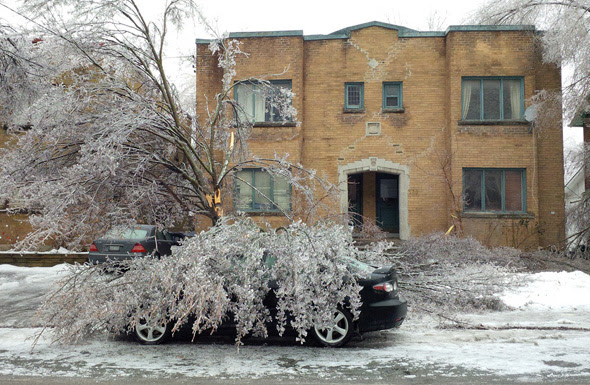 Over a hundred thousand people in Toronto are still without power as temperatures have plummeted, leading the City to issue an extreme cold weather alert. With winds in excess of 30 km/h in the forecast, Hydro officials worry that more trees and power lines could come down as they slowly get a handle on the situation. "We'll see new damage," Toronto Hydro CEO Anthony Haines told the Toronto Star. "We're getting new outage calls. Many of your were out with us yesterday and saw trees raining from the sky. It's a dangerous circumstance."

Transit in the city is mostly back to normal, though service on the Sheppard Subway Line is currently suspended. The TTC hopes to have it back up and running by this afternoon. There are also a variety of roads that remain closed in Scarborough, including sections of Old Kingston Road and Military Trail.

It is a certainty that thousands of homes will remain without power through Christmas day, and perhaps quite a bit longer. Although crews work to address issues with some 40 odd feeder lines, Mayor Ford noted at a press conference this morning that there are many "one-off" outages, such that when power returns to certain sections of the grid, there will still be homes left in the cold and dark.

For the City of Toronto's full update from this morning, check here.

by Derek Flack via blogTO
Posted by Arun Augustin at 8:18 AM