Roughly 30,000 remain without power in Toronto 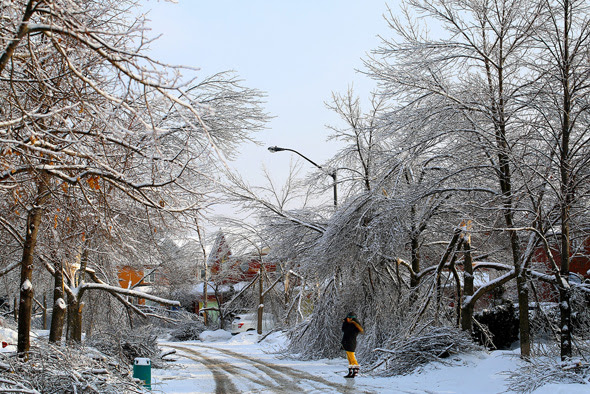 Just over 30,000 homes remain without power in Toronto as of Friday morning, according to Hydro officials. That represents a significant improvement over last night's estimate of 46,000, but also underscores the challenges repair crews have faced in restoring service to the 300,000 customers initially affected by the major ice storm that hit the city last weekend. While most of the major work on feeder lines is complete, there remain thousands of homes that require dedicated attention.

"We're reaching the point now where we expect to be in what I describe as the hand-to-hand combat, which is really one truck and one service into one home," Toronto Hydro CEO Anthony Haines told The Toronto Sun. "This last bit is going to be a lot of heavy lifting."

As cleanup and repair efforts enter a week's length, TDSB schools and services still remain shut down, some with continuing outages and others awaiting inspection before officials will allow them to reopen. The TTC, meanwhile, is running at full service. The same is true for Toronto Public Libraries. Mayor Rob Ford and Toronto Hydro officials are expected to provide an update on the situation at 11am.

Photo by Li Feng in the blogTO Flickr pool.

by Derek Flack via blogTO
Posted by Arun Augustin at 11:34 AM