The top 5 hotels in Scarborough and Markham 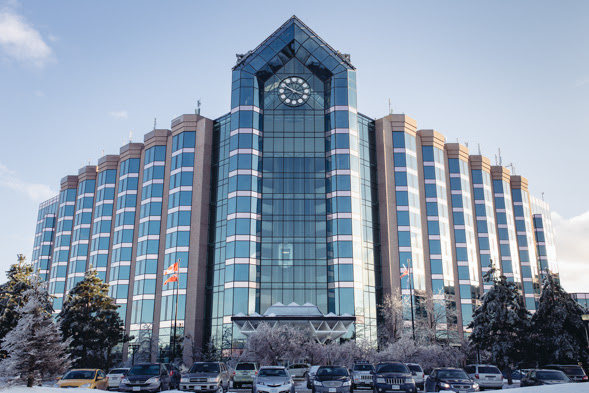 The top hotels in Markham and Scarborough are decidedly more modest than their downtown Toronto counterparts. Instead of names like The Drake or Ritz-Carlton, you instead get simpler names like Hilton and the Monte Carlo Inn. Think less Beyonce, more Ginnifer Goodwin. Despite this unmistakable drop in glitz, however, both areas feature quite a few hotels that feature comfortable rooms, reasonable rates, excellent service and gasp even a touch of luxury (in some of them).

Here are the top 5 hotels in Markham and Scarborough.

Once the most prominent structure in the Kennedy Rd/Hwy 401 area, the Delta Toronto East has since been dwarfed by the nearby Tridel condos. Despite looking a bit meek these days, the hotel provides good value for those looking for a touch of elegance in their stay. There's a spacious atrium featuring a pool (complete with kid-friendly waterslide) and spa, along with large, recently renovated rooms. Plus, there's an excellent Japanese restaurant on the top floor. Rooms start at around $159. Dogs allowed.

The Comfort Inn is definitely well-suited for those who are travelling on a budget. With rates starting as low as $89, it's pretty hard to find a better value without venturing into the unknown realm of Hotwire. The property is one of the older ones on the list, but they've done an impressive job of renovating the interior of the hotel, making it much more welcoming and not as dated as the exterior may lead you to believe. You also get free parking, WiFi and breakfast (featuring hot waffles!).

Winner of the 2013 Certificate of Excellence by TripAdvisor, this modest-looking hotel features clean and spacious rooms starting at around $109 per night. While the rooms look a bit dated (there's a distinct 1990's vibe in the ones I've seen), the lobby is more in keeping with the times. As an added bonus, the hotel is located right beside a commercial plaza chock-full of dining options ranging from Baton Rouge to Go For Tea. Everybody wins. Free WiFi and parking.

Featuring the grandest lobby in Markham, along with an impressive full-service gym and solid in-hotel restaurants, the Hilton Markham is a long-standing favourite for those who want a little something extra in their stay. All of its rooms are suites and the property is in close proximity to a whole host of excellent Asian restaurants. The hotel even allows pets! Just watch out for the non-refundable deposit ($75) and $10 parking fee. Rates average around $149 a night.

The Monte Carlo group of hotels have always managed the rather unique achievement of being relatively new hotels with interiors that feel a little awkward and outdated. The lobby here is big and airy while the rooms are among the cleanest I've ever seen in a comparable hotel. At only $110 a night with free WiFi and parking there's good value here. You can even upgrade to one of the many themed suites starting at around $117. All rooms have fridges and microwaves.

What did I miss? What are your favourite hotels in Scarborough and Markham?

Photo of the Hilton Suites Markham

by Darren "DKLo" Susilo via blogTO
Posted by Arun Augustin at 12:36 AM