Video of violent altercation on the TTC blows up online 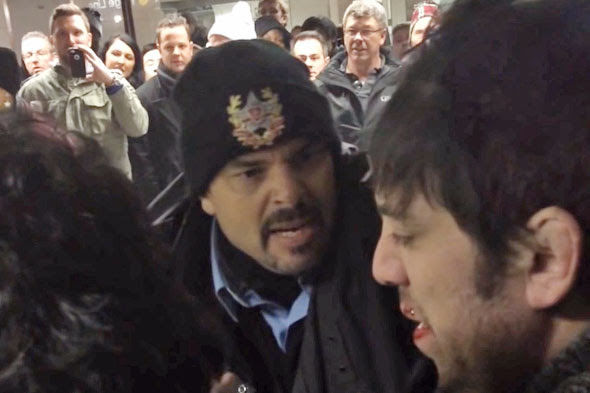 Two amateur videos showing a violent confrontation between an older man and a young man and two TTC special constables following a Maple Leafs game in January at Union station are blowing up on social media.

The six-minute YouTube video posted by Jorge Pinzon on March 3, 2015 shows an incident on January 29, 2015 following a Maple Leafs game against the Arizona Coyotes. This video which has been viewed over 3,300 times is the longer of the two online videos and shows a slightly more complete account on the incident.

In the video you can see an older man with white hair being restrained by a TTC special constable who tells him, " You're under arrest . . . what don't you understand . . . turn around . . . get on the ground."

Another man in plain clothes can be heard saying, "Everybody is recording this shit don't be an idiot."

The video shows both the younger man and the older man being restrained and punched by the two special constables.

A TTC employee in grey uniform and a TTC jacket, can also be seen in the video as he attempts to intervene to presumably de-escalate the situation.

The crowd, many wearing Leafs uniforms, gathers around, raising concern over the way the situation is being handled.

Colle is quoted by CP24 as saying that he is unaware of the context or situation of the video.

"It's certainly something that is alarming when you watch it and I believe that both the TTC and more importantly Toronto police have to investigate this," Colle told CP24.

The altercation involving TTC officers is extremely serious. The video is being reviewed now. We will have more to say in the morning.

He added, "The video is being reviewed now. We will have more to say in the morning."

by Sima Sahar Zerehi via blogTO
Posted by Arun Augustin at 8:48 PM