Burger's Priest to sell epic burger on Canada Day only 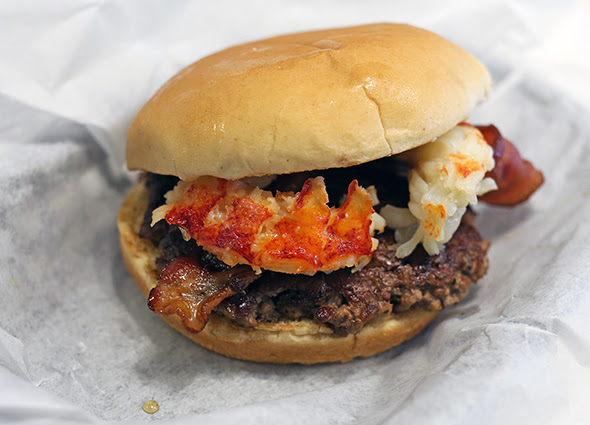 What's the most Canadian burger imaginable? The folks at the Burger's Priest were challenged to do just that, which has resulted in this over-the-top bit of surf 'n' turf. The Confederation Burger, which will only be offered on Canada, is topped with Ontario-farmed bacon, Nova Scotia lobster tail, and Quebec maple syrup.

What'll it cost you? Why, $18.67 of course. That might be a clever ploy to make a few bucks, but in this food-trend-crazy town, a showy burger demands a showy price. And it is clever.

As for the taste, the maple syrup is the star of the show. While the subtly of the lobster tends to get lost amidst the bolder flavours found within the bun, the sweetness of the maple syrup, fried right into the patty, just works. It resembles a syrupy mess of pancakes and sausage, which certainly fulfills the Canadian nostalgia factor.

What would your version of the ultimate Canadian burger be? Let us know in the comments.

by Derek Flack via blogTO
Posted by Arun Augustin at 2:04 PM