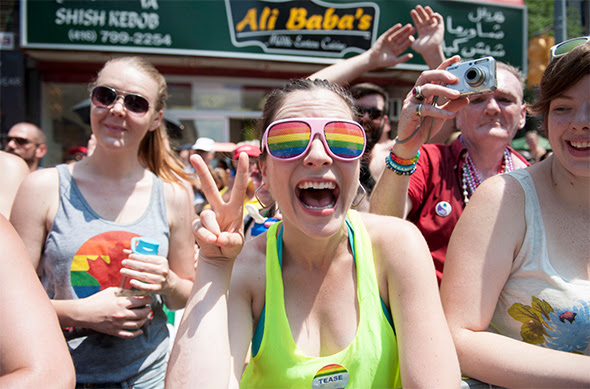 Weekend events in Toronto will have you closing out Pride with all the big parades and parties. Both the annual Dyke March and Pride Parade will take to the streets in support of LGBTTIQQ2SA* rights. There's also a number of festivals happening in the city: Digital Dreams, Ribfest, Taste of Asia and more.

For more events this weekend click on over to our Events section.

GAGA 4 GAGA: The Pride Ball (June 26)
Looking kick off the last weekend of pride with a bang? This Friday a Gaga inspired Pride Ball will take over The Marquis of Granby on Church Street. Get excited for a full night full of dancing, drinks and Gaga's greatest hits.

Toronto Pride Ride (June 26)
Grab your bike and cycle down to the Humber River Bicycle-Pedestrian Bridge to take part in the annual Pride Ride. If you have some change to spare, head The Village post-ride to grab a drink and join the festivities.

Dyke March (June 27)
See Toronto come together in support of the LGBTTIQQ2SA* community for a political demonstration of epic proportions. Post march activities will take place at Allan Gardens. There will be the Raging Asian Women drumming group, speakers, yoga, and water play.

Pride Parade (June 28)
Embrace the spirit of Pride and attend the annual Pride Parade this Sunday. Expect to see big names like Pussy Riot and Cyndi Lauper in attendance.

MOCCA's Final Exhibition on Queen
MOCCA bids goodbye to West Queen West with its final exhibition before a long pause and entry into awesome new digs. Slide on your deck shoes and head to the Queen West Yacht club to get in on the fun.

Brazilian Block Party (June 27)
This family-friendly street fest will have you spending your saturday indulging in everything from street food to samba dancing. Look forward to a full day of DJ's, vendors, live entertainment and more.

Digital Dreams (June 27-28)
The "largest electronic music festival in Canada" that you can probably take an Uber home from is still going strong. The biggest outdoor dance party is bringing Armin Van Buuren, Zedd, Steve Angello, Martin Garrix and more to The Flats at Ontario place to keep you dancing for two days straight.

Taste of Asia (June 27-28)
If you can't get enough of summer food fests, here's one to add to your list. The event will feature 150 Vendors serving up mouthwatering Asian fare. Also on tap: a hot sauce competition, photo booth and bumper soccer.

Ribfest (June 27-July 1)
The annual celebration of BBQ and pork takes over Centennial Park from June 27 until Canada Day on July 1. Concert stages and a midway make for a whole day of family fun, while the main attraction is of course the selection of slow smoked meats from pit masters across Ontario.

PS Kensington (June 28th)
Head to Kensington Market for Pedestrian Sundays throughout the summer (happening the last Sunday of the month from May to October). You'll find a host of street performers, food on sticks, and the Kensington's Art Fair, which has returned for a second year.

Air Guitar Toronto Championships (June 27)
Watch as Toronto's finest air guitarists take to the stage at Lee's Palace. Look forward to a night of weirdness as they compete to win a spot in the Canadian National Championships.

Gatsby Garden Party (June 28)
Put on your most dapper duds and travel back to the 1920's at the Gatsby Garden Party. Spadina Museum is hosting the afternoon event, which promises jazz music, dancing, and croquet. You'll want to prepare for crowds, as the event has gotten a lot of attention this year.

Disco Disco (June 28)
If you'd rather flashback to the era of disco dancing, this one's for you. Strap on your platform shoes and get ready to boogie with the best of 'em at Barbara Hall Park.

Sandcastle Day (June 28)
Feeling artistic? Show that you have skills with sand at the Ashbridges Bay Sandcastle Day. Make anything from pyramids to classic castles, you'll want to think big if you want to snag the Beaches Cup.

For more events this weekend click on over to our Events section. Have an event you'd like to plug? Submit it for free using this form.

by Alice Prendergast via blogTO
Posted by Arun Augustin at 10:43 AM