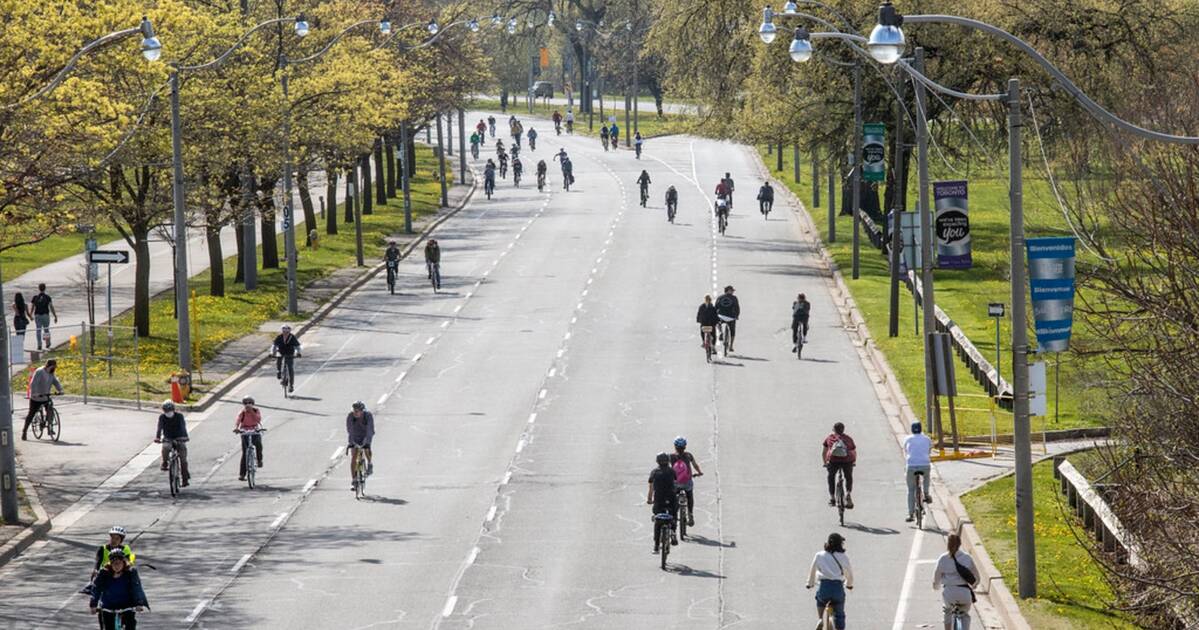 As Toronto prepares for its final weekend of closing sections of major roads to cars to provide extra space for pedestrians and cyclists, many of the city's road users are wondering why a good thing has to come to an end so soon.

According to data released by the city Friday, an average of more than 25,000 cyclists and 10,000 pedestrians took advantage of the ActiveTO road closures on weekends in June, July and August — proving that the program has been a great success.

The most successful program that gets people healthy and outside in 2020 during a pandemic is ending for no reason.

Does anyone know why it's ending? https://t.co/XZRjws0ExS

Sure, there have been complaints about increased traffic and collisions on the Gardiner Expressway, but both anecdotal evidence and hard data show the program has been mostly welcomed by residents who've enjoyed having space to spread out in a city that's known to cater to cars.

Mayor Tory has also acknowledged the popularity of the program.

"ActiveTO has been a tremendous success. We delivered more space for physical activity, supported the overall wellbeing of Toronto residents, and helped keep people safe from virus spread – and right when we needed it most," he said in a statement Friday.

"Thousands of people, many of which are families, used the space created around busy trails and parks all summer long to get outside and take advantage of the warm weather."

So why, many are wondering, is the program due to end after this weekend — especially when the weather is expected to remain comfortable and summer-like for at least a little while longer?

"Activities get discontinued because they are not popular and sparsely attended. #ActiveTO is the opposite. It deserves to go on into autumn," wrote one ActiveTO fan on Twitter.

"This should go on for at least another month based on the thousands of people I saw out just last weekend when I toured all 3 #ActiveTO zones on my bike," wrote another.

Can we keep #ActiveTO? Even if just on Sundays? It's a great initiative that should be run year round, maybe changing up streets as the seasons change. @joe_cressy @kristynwongtam @JohnTory

Others have meanwhile taken it a step further and said they believe the program should be in place all year round, permanently.

Honestly #ActiveTO and #CafeTO have made Toronto feel more like a city that cares about the people who live here. Hey @JohnTory, I would like both these programs to stay permanently. https://t.co/j2B1gvquYf

Unfortunately, according to a city spokesperson, an extension of the ActiveTO road closure program simply isn't in the cards for this year due to a number of considerations.

"The program was always intended to be temporary," the spokesperson said.

"Initially, staff targeted Labour Day weekend as the final weekend for the program before making the decision to extend it to the end of September."

Wait does this mean all the benefits of outdoor exercise and physically distanced active transportation listed on the #ActiveTO website no longer apply as of Monday and COVID’s been eradicated? 🤔 https://t.co/d4cogNHiXu

On the bright side, city staff members are currently reviewing the program with an aim to deliver it in some form again in 2021, ideally with improvements.

So while it may be disappointing that cyclists and pedestrians will no longer get to take over the streets for some much-needed fresh air and exercise throughout the rest of the fall and winter, at least there's one more weekend of ActiveTO road closures ahead of us before the program — and Toronto residents — go into hibernation (and possibly lockdown) until the spring.