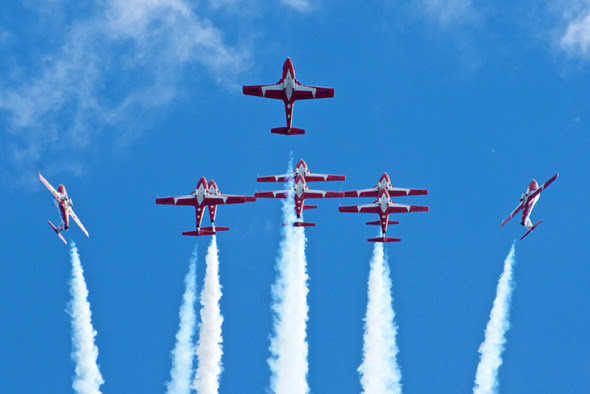 Weekend events in Toronto is our guide to events happening this Friday, Saturday and Sunday. Here's what's happening in Toronto this Labour Day weekend.

Maybe I should let the Toronto Air Show (unofficial, I guess) Twitter take this one. "VYOOOOOWWW-WWWOOOOOOOR-SHHHHH!!!!" Whether you're planning to have your eyes on the sky or your energy devoted to complaining (via Twitter or IRL), one must admit that big flying machines are pretty cool. The 65th Toronto show will feature tons of noise polluting planes and jets with super neato names. How does one get to name a jet, anyway? August 30 - Sept 1, 1-4pm, Canadian National Exhibition (210 Princes Blvd).

Today in Toronto FanExpo will call the city's geeks, cosplayers, comic artists, and curious to the Metro Toronto Convention Centre. That big Twin Peaks reunion (well, big in that three of the star actors have been scheduled to attend) goes down on Saturday. Horror fans should also especially find Little Terrors of interest. The people on the TTC wearing costumes have been explained, you can now carry on as normal. Until Sunday, Metro Toronto Convention Centre (255 Front St West).

Half dance party, half flea market, Deep North's Beat Bazaar is a day-long community music market specifically for electronic lovers, though anything goes. From vintage and used audio equipment to a dedicated vinyl section, anyone can show up at Geary Lane to buy, sell, ogle, and barter for synths, stereos, DJ gear, and records while eating, drinking, and dancing to eight live DJs including a headline set by Basic Soul Unit. It's like the old world spirit getting a techno facelift. Saturday, August 30, 2-10pm, Geary Lane (360 Geary Avenue).

One thing about heavy, subconscious-scraping therapy is that if you're hungry, you're (excuse my French) fucked. A decent tarot reading is like a light, extrapolate-your-own-adventure therapy session, which means pairing it with a nice brunch would be a good idea in any old town. But this is Toronto, so it's genius. $29 gets you a 15-minute reading and a $5 menu voucher. Sunday, August 31, 11am-3pm, Flying Beaver Pubaret (488 Parliament Street).

Can't wait for TIFF? Neither can we - and documentary fans don't have to, thanks to Hot Docs. Their audience favourites will screen from August 29 to September 4, and titles include Six Ways to Santiago, Particle Fever, Fed Up, and Life Itself. A 5-pack of tickets will cost you $40, which is a pretty good deal. Until September 4, Bloor Hot Docs Cinema (506 Bloor St. West).

They're back. Wear what you want. Wait, the Constantines are opening? Wear that flannel you used to wear to the Lakeview back when they had open mic nights. Friday, August 29, Molson Ampitheatre (909 Lakeshore).

Yonge and Bloor will go car-free again this Sunday, once again from 8am to noon, prompting a few curious head-scratchers to say "people get up before noon on Sunday?" Musical performances start at 9:30am, which is like, four hours before you roll out of bed for brunch, I know. Sunday, August 31, 8am-12pm, Yonge & Bloor. Bonus: here's an after party with David Soknacki and John Catucci that you can make the tail end of.

ALL OF THE LIGHTS

What rides? The CNE has become something of a Mecca for deep-fried eats. Consume at your own peril. Check out our outrageous food preview here and our top entertainment picks here. There are rides, games, and male-dominated musical performances too. Until September 1, Exhibition Place (200 Princes' Blvd).

Have an event you'd like to plug? Submit your own listing to the blogTO Toronto events calendar or contact us directly.

by Aubrey Jax via blogTO
Posted by Arun Augustin at 11:14 AM