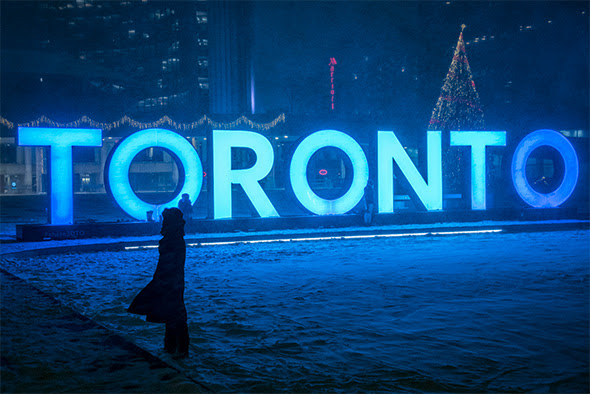 A new year means a chance for us to start fresh; we're all a collective tabula rasa ready to become the very best version of ourselves. It's also an opportunity for Toronto to transform into the urban metropolis of our dreams, so here are some resolutions we hope this city - and its inhabitants - stick to in 2016.

Never call Toronto The 6 again
It was fun while it lasted, but this nickname was so 2014 (along with #6Dad and #6god). This resolution will unfortunately prove futile because we'll probably be inundated with these monikers again once Drake finally releases Views from the 6.

Stop complaining about the 501 and 504 streetcar routes
If there's nary a streetcar in sight along King or Queen Street, you can now take UberHOP instead of cursing under your breath and subtweeting the TTC. Also, it's getting better.

Cease all selfies with the Toronto sign
Yes, Toronto has a beautiful multicoloured name plate that deserves our utmost love and respect. But seriously, it's just a sign, and it's not going anywhere so put down the selfie stick and simply admire it from afar.

Take the UP Express
Unlike the Toronto Sign, the Union Pearson Express hasn't been very well received here. Show it some love in 2016 and vow to take it to (or from) the airport. Since Metrolinx is offering two-for-one fares, you can even just ride it for fun! How's that for a first date idea?

Drink at the Brunny one last time
This iconic Toronto bar isn't quite dead yet, so head on over to the Annex and relive your glory days as you pound back cheap beers and tequila shots.

Try all the new craft breweries in Toronto
Once you stave off your actual resolutions, try this Toronto-centric one and support the brand new craft breweries that are popping up all over the city. There's plenty to try and you're pretty much guaranteed a chance to wander through far-off neighbourhoods; this is really a two-for-one.

Don't be a comment troll
Numerous Toronto publications (including this one) have either changed or scrapped their comment sections because clearly, we can't have nice things. While constructive criticism is beneficial, blatant rudeness is not.

Don't park in the bike lanes
Toronto's now a friendlier place for two-wheelers, but not everyone got the memo. Along with the Cactus Club Cafe valet blunder, numerous taxis - as well as Stephen Harper's campaign bus - got caught in the bike lane this year.

Start a Toronto parody Instagram account
With many popular feeds running amuck in The 6 (oops), there's still plenty of room for more Toronto-related accounts. Perhaps you'll document the fat squirrels craze, or the lineup in front of Bang Bang Ice Cream on a hot summer's day. If all else fails, you can always just Insta a photo from Sweet Jesus because everyone loves those soft serve cones.

Revel in the fact that Toronto's one of the world's most liveable cities
This city isn't perfect and yes, it's pretty expensive and there's still so much that needs improvement. But, we're all pretty lucky to call Toronto home. Make the most out of 2016 and try that random activity you've been putting off or resolve to simply spend a day walking around an area you've yet to explore.

What Toronto resolutions can you think of? Let us know in the comments.

Photo by Ben Roffelsen in the blogTO Flickr pool.

by Amy Grief via blogTO
Posted by Arun Augustin at 1:49 PM