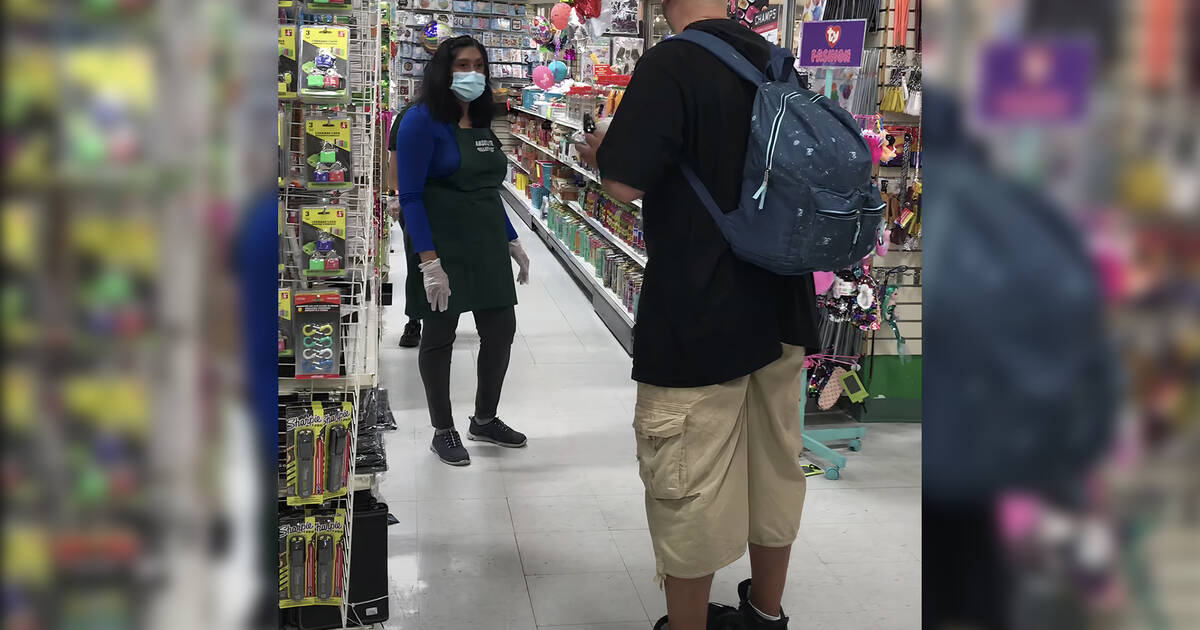 Anti-maskers going on racist tirades when confronted for not abiding by the province's face covering mandate in indoor public spaces is the new thing, apparently.

A video has surfaced this week of yet another white man freaking out at a retail employee after they informed him he would have to don a mask if he wanted to shop on their premises.

Footage of the incident, taken by a fellow customer at the Absolute Dollar store in Gerrard Square Shopping Centre, begins with some shockingly racist, obscenity-filled comments right off the bat.

"I go to her fucking country and save them from fucking shooting each other and she fucking comes here thinking she controls shit," the irate man starts, apparently identifying himself as a veteran.

He proceeds to tell both staff and bystanders to "shut the fuck up" and that they "just want to cause a scene" when they confront him. And, when he's called out for his disgusting remarks, he appallingly replies "you don't even know what racism is. That's not racism, that's reality."

The offender claims to have a medical exemption of some sort that prevents him from wearing a face covering, though he appears to be in good enough health to raise his voice while aggressively approaching the female associate he is attacking.

According to the description of the minute-long clip, employees had tried to be polite with the man, who made even more rude and bigoted comments off-camera, calling them "rats that came in his country."

Since it was filmed on Sept. 4, it has made its rounds on social media, outraging locals and those who frequent the dollar store where it took place, who have found the staff members there to be extremely kind and pleasant.

"This guy is a disgusting racist, and it's unacceptable that these women have to put up with his abuse," one member of a Leslieville Facebook group said about the footage.

"These sorts of incidents happen far too often, and are rarely caught on video. I wish there were some repercussions for horrendous behaviour — hopefully he at least gets banned from the mall," another added.

And, that commenter certainly isn't wrong — since the onset of the pandemic, it seems that xenophobic tirades have become more common in and around the city, or at least caught on film more often.

Hopefully, in capturing and circulating footage like this, residents can help to identify racist morons such as this guy so they can be punished accordingly.