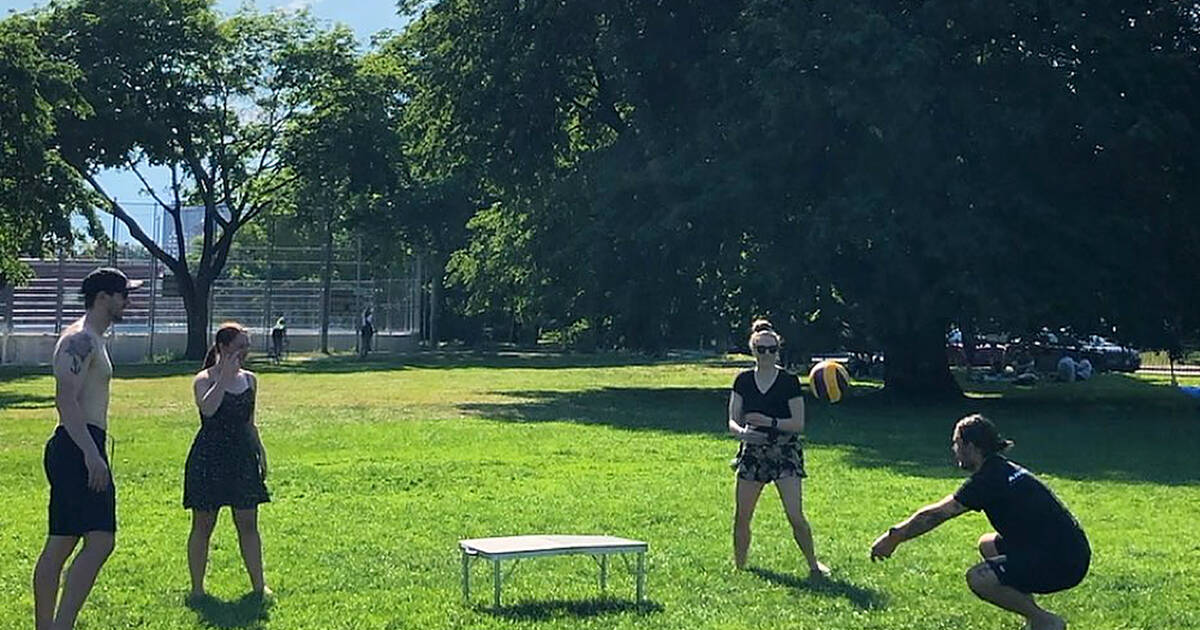 Toronto volleyball enthusiasts, good news: there's a new sport coming to town, and it doesn't require getting 11 people together for a match.

A game called Boardball, born in Toronto, is about to land in Toronto, and it's catching some buzz amongst people eager to play some social distanced team sports during the pandemic.

The rules are simple: comprised of a board and a ball, all you really need is four players and about 36 square feet to play.

It's pretty much Spikeball (which has been making its presence known at public parks around the city — here's looking at you, Trinity Bellwoods) meets volleyball, but instead of a bouncy net and smaller hand ball, it's a hard surface to bounce a beach volleyball on.

It's three touches per team, and no double-touching by a player allowed. It's also one bounce maximum on the board. The first team to hit 21 points wins.

According to Amanda Nguyen, a Boardball co-founder, the idea started as a hobby in a squash room court back in late 2019.

Instead of an official board, founders used stackable workout steps before their videos started to go viral. The team quickly realized the game  could be taken to the next level.  At some point, the game even made it to Peru.

A fun feature about Boardball is that you're also encouraged to play indoors, ideally inside a squash court, where you can increase the difficulty level by bouncing the ball of the walls.

"...The beauty of boardball is that there is no standardization of court size or playing area for recreational games. You can set the guidelines and boundaries based on your environment or skill level," reads the site.

Boardball will be launching its Kickstarter soon, with more information on price and availability coming soon.