Huge crowds show up to protest against the Toronto Public Library 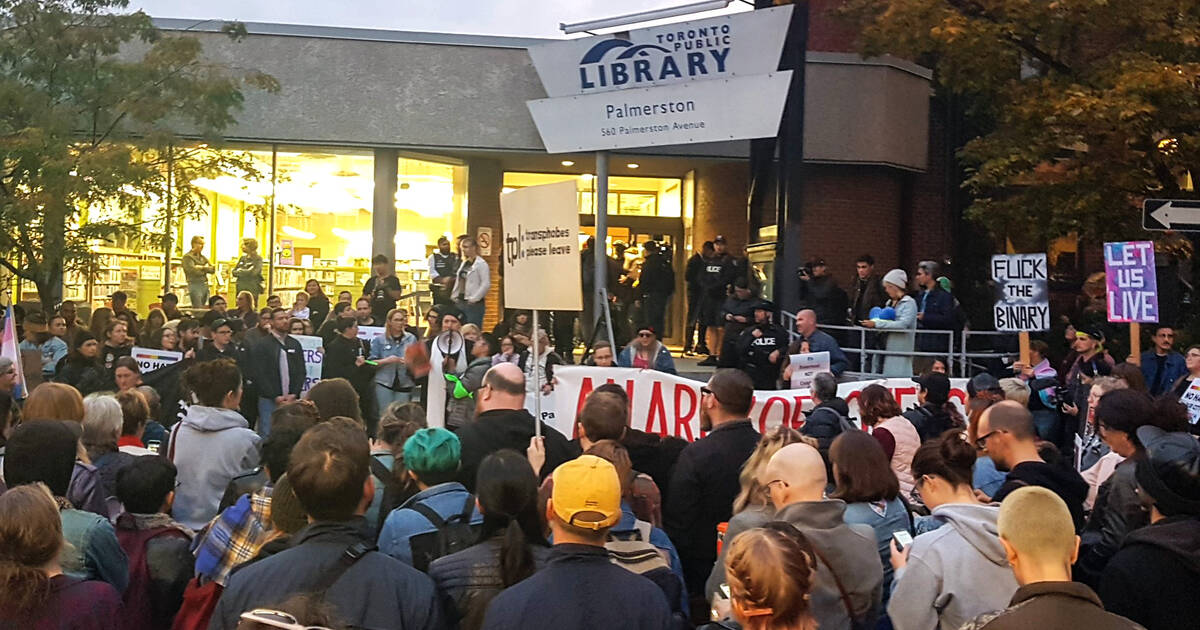 The streets surrounding a small branch of the Toronto Public Library were swarming with protesters on Tuesday night as Meghan Murphy — a controversial writer with notoriously transphobic views — spoke to a sold-out crowd of her supporters about gender identity.

This was such a powerful night. WHOSE LIBRARY? OUR LIBRARY. #TakeBackTPL https://t.co/VIlhL47scR

Murphy's scheduled appearance at TPL's Palmerston branch near Bloor and Bathurst has been the subject of intense public debate in recent weeks, with thousands arguing that the Twitter-banned Canadian shouldn't be given a public platform, least of all within a public library.

Nearly 9,000 people had signed a petition calling upon the TPL board to "stop hate speech from being spread" in Toronto ahead of the event after it was announced that a group called Radical Feminists Unite had rented out theatre space within the Palmerston branch for Murphy to speak on October 29.

There was a huge protest in front of the Toronto Public Library last night #Toronto #TPL pic.twitter.com/Vz143z0s2t

City Librarian Vickery Bowles refused to cancel the event, arguing that libraries are obligated to protect free speech and provide resources to all citizens, regardless of their beliefs.

The move was criticized widely by public figures, including Mayor John Tory, and denounced by community organizations such as Toronto Pride, The Toronto Comic Arts Festival and even the Toronto Public Library Workers Union.

What amazing turn out tonight to declare no to hate. #prideto pic.twitter.com/2qJLurx7Iq

When it became clear that Murphy — who has vocally opposed both the cultural and legal acceptance of transgender women — would indeed be speaking, a coalition of LGBTQ+ advocacy groups and library workers organized a peaceful protest in support of trans rights.

As a trans woman in Canada I would like to remind everyone that words have consequences. That #MeghanMurphy pushes hate and violence. That she has weaponized free speech. That I also fled my home because of threats of arson. That @torontolibrary is complicit in grandstanding her pic.twitter.com/jRgjrM3BGl

"Toronto Public Library has seen fit to allow Meghan Murphy, a trans-exclusionary writer banned from Twitter for hateful conduct, to hold a talk at its Palmerston branch, despite clear language in TPL rental policy that gives the library the right to refuse events that will further endanger vulnerable people—as this one certainly will," reads the event's description.

"Palmerston is a public space meant to be welcoming for families and youth—including queer and trans families, queer and trans youth. Those protesting this event wish to keep their library safe for such vulnerable community members."

Murphy speaks in 15 minutes inside. There are currently 11 police officers outside the library and more inside - the officers outside couldn't tell me how many. Here is a video of the crowd.#TOpoli pic.twitter.com/FbR5YeNcwK

The protest went off without a hitch before, during and after Murphy's speech, which was entitled "Gender Identity: What Does It Mean for Society, the Law, and Women?"

The effect of @torontolibrary hosting "transwomen are not women" Murphy is that it puts the humanity of transwomen up for debate. It is not. Gender is no more biological than race is & the thin straws of "science" is grasped at to rationalize the oppression of both. #TakeBackTpl

Murphy told roughly 100 attendees inside the library that she had "not suggested that trans people be excluded from spaces" (despite the fact that she's famous for saying trans women shouldn't use public washrooms designated for women.)

"I'm not actually interested in whether or not people identify as trans. It has no bearing on my arguments. I'm interested in who's male and who's female," she said, according to the Canadian Press, adding that she has "never advocated for violence against anyone" nor "engaged in any hate speech."

scenes from last night's @torontolibrary #TakeBackTPL. an evening of righteous anger, read-in, love and inclusion. and lots of signs. here are ten of them.

“our library should be a #safeplace not a #hateplace.” pic.twitter.com/JXCSE8g7n7

As they left, attendees were met with boos and chants of "trans rights are human rights" from protesters gathered outside.

At one point, protesters got inside the library to denounce Murphy, who many have panned as a "trans-exclusionary radical feminist."

Police kept protesters inside the library for about 30 minutes, by most reports, prompting further criticism from the crowd.

Eventually, the protesters emerged back out into the crowd as those waiting outside cheered.

And now the sit-in protesters are leaving through the front door. An officer stationed outside couldn't say to me why the front door had been locked in the first place, but said they had been free to leave through the back.#TOpoli pic.twitter.com/Kfr0WpW4Wm

Not even Toronto's mayor was able to stop the event from taking place, but residents of the city made their thoughts on Murphy's views quite clear with their actions and powerful signs reading "Trans Rights Now," "We Exist" and "Let Us Live, "among other things.

Beautiful night to #TakeBackTPL and show up against anti-trans speakers & @vbowlestpl ! This isn’t a free speech issue, this is people united against hate and bigotry in all of its forms. Transphobia is connected to systems of white supremacy. We say no!
Also:#JusticeForMoka pic.twitter.com/mPtMvZz8uW

"Overwhelmed in both good ways and bad. Growing up in a small community I've never been part of community action at this level," wrote Toronto resident and trans woman Niko Stratis on Twitter following the protest.

"It was a lot to take in, some minor PTSD triggers here and there, but mostly: so many beautiful people came and stood side by side."

by Lauren O'Neil via blogTO
Posted by Arun Augustin at 8:11 AM