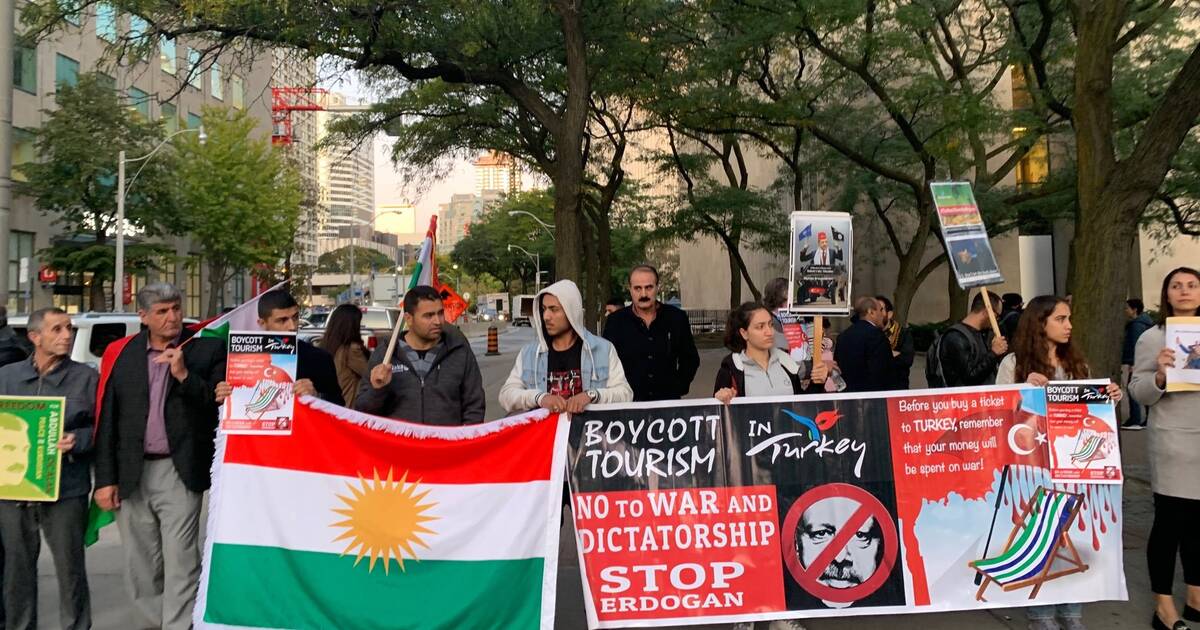 As violence and tensions rise in Syria, Kurds in Toronto are protesting Turkey's attack and the U.S.' decision to remove troops from the region.

#Kurds in Toronto take to the streets to protest Turkey's invasion of #Rojava, Syria's #Kurdistan. pic.twitter.com/uTsjrC9Hve

Groups of protesters gathered outside the American Embassy at 360 University Ave. yesterday to demand U.S. support for Kurds in Syria and to denounce Turkey's president.

Kurds in Toronto at front of USA Embassy Trump why you sold your allies , the Kurds ! pic.twitter.com/fx16H2MGRE

According to the 2016 Canadian Census, there are about 7,095 Kurdish speakers in Ontario ⁠— the most of any Canadian province.

Now, Kurds in Toronto are speaking up against the growing conflict.

On Wednesday, Turkey announced they'd be launching an assault on the Syrian Democratic Forces (S.D.F), a Kurdish-led militia in northeastern Syria.

President Recep Tayyip Erdogan of Turkey said the attack is an attempt to prevent the Kurds from creating a terror corridor in the region and that the overall goal is peace, but many aren't buying it.

Since the attacks began, many have warned of a potential humanitarian crisis and tens of thousands of people have already fled their homes to escape danger.

According to the BBC, dozens of Kurdish fighters and civilians have already been killed.

But the conflict didn't come out of nowhere. There's a historically rocky Turkish-Kurdish relationship at play as well.

And while the Kurds are the fourth-largest ethnic group in the Middle East, they are stateless and have long been the subject of prejudice and discrimination.

Some also worry the conflict could leave an opening for ISIS to gain power in the region once again, as the S.D.F is part of the reason they were defeated in the area and many ISIS fighters are currently being held in prisons there.

Experts are saying the conflict could create another power vacuum in the area, which is said to be what led to ISIS' rise in Syria in the first place.

On top of that, the U.S., which is an ally to both Turkey and the Kurdish people, announced they'd be pulling troops from the area, essentially facilitating Turkey's attack.

President Donald Trump has been overwhelmingly criticized for the move, and his decision is part of the reason why Kurds in Toronto are protesting.

by Mira Miller via blogTO
Posted by Arun Augustin at 11:53 AM