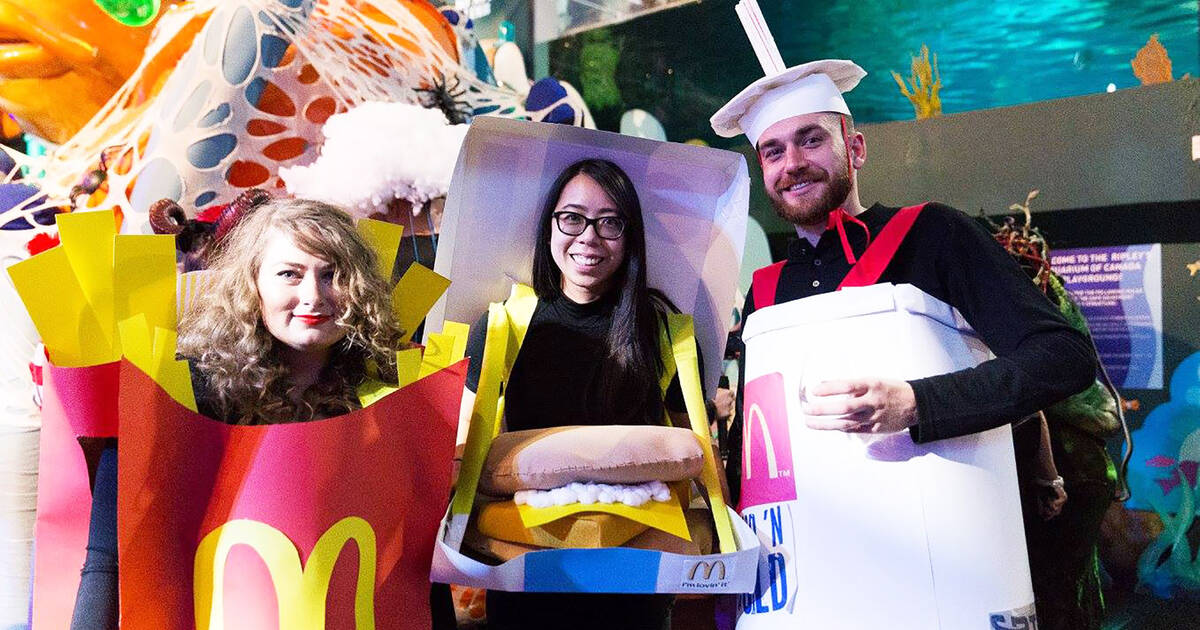 Weekend events in Toronto are ready to get spooky as the Halloween fun takes over. Here is just a small sample of the many Halloween parties happening over the next few days. Elsewhere, a huge immerseive Dr. Seuss experience is here and there's a big contemporary art fair.

International Festival of Authors (October 24 - November 3 @ Harbourfront Centre)
The work and process of authors and writers is the focus of this festival that welcomes authors from all over in to chat about their works.
Art Toronto (October 25-27 @ Metro Toronto Convention Centre)
Art of all shapes and sizes, performative and conceptual, are part of this huge art festival with parties, talks and workshops.
Impulse (October 25 - November 12 @ Harbourfront Centre)
Winter Stations is still some time away, but it's kicking off a season of interactive outdoor art with a bunch of seesaws that produce light and sound.
AGO All Hours (October 26 @ Art Gallery of Ontario)
It's a party in the museum with a full day of fun that highlights the work of local artists among music, activities, exhibitions and late night fun.
TEDxToronto (October 26 @ Evergreen Brick Works)
TEDxToronto is back to feature local movers and shakers discussing interesting subjects and hosted by Kardinal Offishall.
Night of Dread (October 26 @ Dufferin Grove Park)
Don your best black-and-whites for an evening of outdoor performances with local artists putting on fearful pageantry, revels and mockery.
Dr. Seuss Experience (October 26 - January 5 @ Square One Mall)
Get ready for a massive 15,000-square-foot Dr. Seuss walk-through experience in a colourful playground of quirky, Seuss-themed fun.
Pedestrian Sundays (October 27 @ Kensington Market)
The final PS Kensington is upon us and that means wearing a cozy sweater for a day of car-free fun in the streets, including music, meditation and games.
Dark Waters (October 25 @ Ripley's Aquarium of Canada)
Get spooky with the fishies this Halloween as Ripley's hosts its annual party with costumes, food, drinks and lots of dancing.
Storming Area 51 (October 25 @ The Garrison)
The Goin' Steady DJs are back with a night of spooky sounds through the ages to get you sweating in your costume inside all night long.
Friday Night Live (October 25 @ Royal Ontario Museum)
The ROM is getting spooky with a night of Halloween spread throughout the museum, including a special exhibition, food, drinks and music.
Starcourt 80s Halloween Spooktacular (October 25 @ Gladstone Hotel)
Enter into Starcourt Mall of Stranger Things as the Gladstone transforms into the gloriously-80s shopping centre with all-80s everything.
J E L L Y Halloween (October 26 @ Glad Day Bookshop)
J E L L Y is back with a queer Halloween party for the ages with Young Teesh spinning all the best house, trap, Afro, dancehall, electro vogue and club.
Promise Halloween (October 26 @ Lithuanian House)
Two epic stages, thumpin’ tunes, mesmerizing twists and turns and bonkers nooks to get lost in are all part of this big Halloween dance party.
Dance of the Damned (October 26 @ The Opera House)
Rue Morgue is back with their massive Halloween party that includes eye-popping visuals, music, contests, drinks and some of the best costumes.
Scream Whistle (October 26 @ Steam Whistle Brewing)
Party it up in one of the biggest beer halls in the city as Steam Whistle hosts its huge Halloween bash with lots of brews flowing all night.
Fright Night (October 26 @ Phoenix Concert Theatre)
Ghoulish surprises and horrifying drag performances are all part of the fun at this big Halloween party with DJs spinning the spookiest hits all night.
Carnivale (October 26 @ Grand Bizarre)
One of the biggest Halloween parties of the year is back at a new location with a night of sideshow acts, fire artists, contortionists and lots more.
Hip Hop Market (October 25 @ The Joint)
Toronto's up-and-coming hip-hop artists are taking the stage to perform their stuff, including Spark Houston playing works of his debut album.
Taking Back Sunday (October 26-27 @ The Danforth Music Hall)
Superstar rockers Taking Back Sunday are performing the first of a sold-out (resale tickets available) night stint with new and old favourites.
The Japanese House (October 27 @ Phoenix Concert Theatre)
Amber Bain's dream pop project The Japanese House is back with melodic songs to take you away to far-off soundscapes.
imagineNATIVE (October 22-27 @ Multiple Venues)
This year's film and arts festival dedicated to works by Indigenous artists comes to an end but not before a final weekend of programming.
Magic Pills: Promise or Placebo (October 27 @ The Royal Cinema)
Is that salt rock lamp effective or just marketed well? This doc explores the scientific evidence behind homeopathy practises around the world.
Zombieland (October 27 @ The Grand Gerrard Theatre)
The Halloween festivities are in full effect with a screening of the star-studded 2009 horror-comedy about the last reminding humans fighting zombies.
After Munich (October 27 @ Hot Docs Ted Rogers Cinema)
The Munich tragedy went down in history as one of the bleakest days in history and this documentary looks at those still affected by it.
Beat The Clock Vintage Show (October 25-27 @ Kensington Mall, Kensington Market)
Vintage clothing, patches and pins are on sale for up to 30 per cent off at this three-day pop-up with tons of cool finds to add to your wardrobe.
Timbuk2's Warehouse Sale (October 26 @ Timbuk2)
Everything you need to carry your stuff is for sale up to 70 per cent with Timbuk2's signature backpacks, messenger bags, accessories and luggage.
Small Press Market (October 26 @ Harbourfront Centre)
Part of the Festivals of Authors, this market highlights books, zines and published works issued by twelve of Canada's small, independent presses.
Wildly Delicious Warehouse Sale (October 26 - December 20 @ 114a Railside Road)
Fill your pantry on the cheap with big savings on specialty foods and gifts including jams, dips, oils, vinegars, seasonings, salts, dippers and sauces.
Punk Rock Flea (October 27 @ Lee's Palace)
Anti-everything is on at this flea with punk-inspired gnarly creations like t-shirts, pins, patches, vinyl, gifts and crafts.

by Lisa Power via blogTO
Posted by Arun Augustin at 2:21 PM