Liberals totally dominated Mississauga and Brampton in the federal election 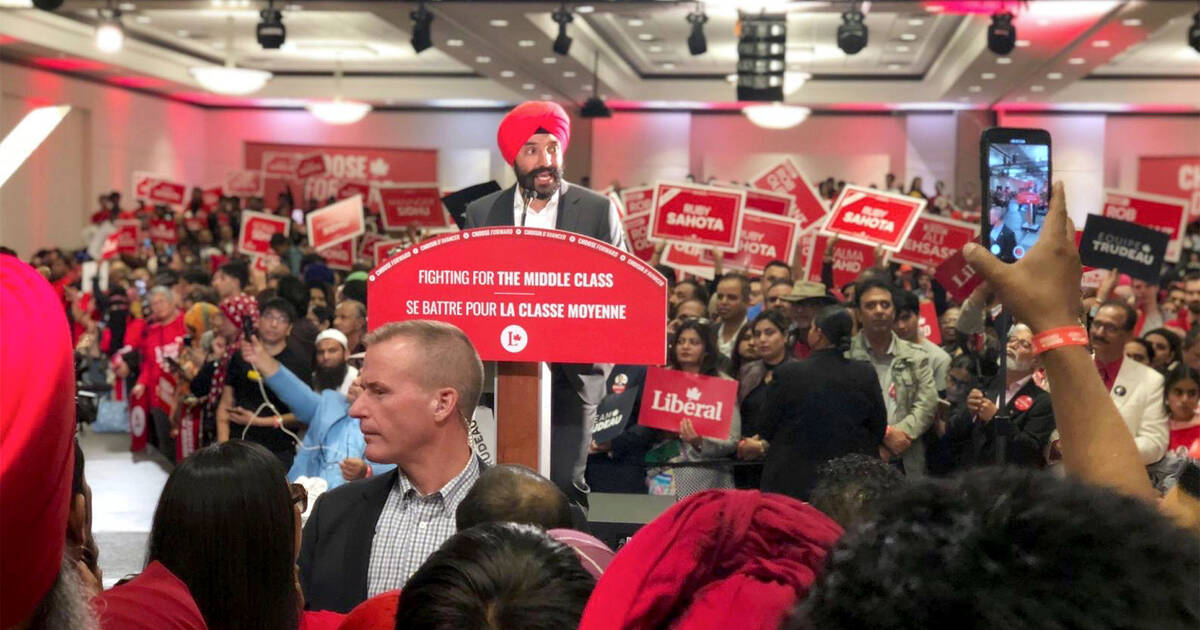 Though a chunk of GTA ridings were projected to be a toss-up between the NDP and Liberals in yesterday's federal election, the region is looking thoroughly red this morning (though orange in other ways).

There were a number of pivotal ridings expected to have extremely close runnings in and around the city, according to electoral forecast website 338Canada, including Davenport, Parkdale-High Park, Toronto-Danforth, Mississauga-Lakeshore, and all of Brampton.

All of Toronto's 25 seats were secured easily by Liberals — notably Julie Dzerowicz in Davenport (who beat NDP candidate Andrew Cash by a narrow 2.8 per cent), Arif Virani in Parkdale-High Park (with the NDP's Paul Taylor trailing by 16.1 per cent), and Julie Dabrusin in Toronto-Danforth (beating out the NDP's Min Sook Lee by 14.4 per cent).

i knew SO many people voting NDP... i’m really confused. the entire city of toronto is liberal.... how?!?!

In the GTA, Liberals took 24 seats, and Conservatives, the remaining 8. No NDP, Green, or People's Party candidates were elected.

Thank you Brampton Centre. Thank you for entrusting me to be your representative in Ottawa, again. It has been a true honour of my lifetime and I cannot wait to get back to work. You have chosen forward, so let's keep moving in that direction. #elxn43

Notably, Liberals took all of Brampton, Oakville, and Mississauga, with Ramesh Sangha victorious in Brampton Centre and Sven Spengemann in Mississauga-Lakeshore.

The Ontario Legislature returns next Monday. Many PC MPPs watched their ridings go Liberal federally in this election. The results in the 905/GTA send a strong message to the provincial government. It will be interesting to see how the Ford government responds to Trudeau's win.

In Humber River-Black Creek, only 16.3 per cent of voters supported Conservative Iftikhar Choudry, while 18.9 voted for NDPer Maria Augimeri and the vast majority (61.1 per cent) voted for Liberal encumbent Judy Sgro.

Thank you to my team, family & friends for all your hard work & dedication. This wouldn’t have been possible without you. I’m incredibly grateful to Mississauga-Malton for putting your trust in me once again to be your Member of Parliament. It’s an honour to serve you in Ottawa. pic.twitter.com/00hxfDHAMB

Hamilton was split, with the NDP winning in Hamilton Mountain and Hamilton Centre, and Liberals clinching Hamilton-East-Stoney-Creek and Hamilton West-Ancaster-Dundas.

Further north, Richmond Hill was neck-and-neck between Liberals and Conservatives, with Liberal incumbent Majid Jowhari eking out a win over Conservative Costas Menegakis by just 0.2 per cent.

Ontario, then, is basically just what we expected. A re-run essentially of 2015 again?

The reason it went to Liberals was that Ontario voted for Doug Ford a Conservative last election, (true to GOP fame) for take aways on middle class he's stripped the province bare, giving the fat to rich donors. GTA/Toronto voted totally liberal -rare for some of those districts

Many are speculating that the somewhat unexpected red sweep was in response to the leadership of Conservative Premier Doug Ford, who has fallen further into disfavour since his election into office last June.

by Becky Robertson via blogTO
Posted by Arun Augustin at 9:19 AM