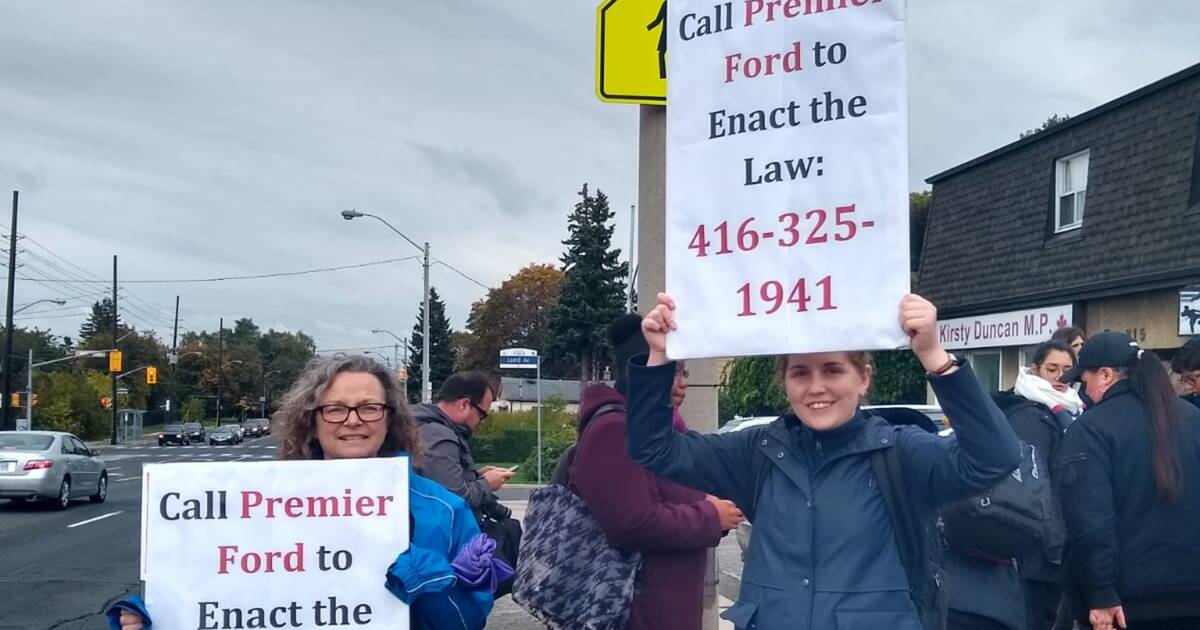 A group of protesters is currently occupying Premier Doug Ford's Etobicoke constituency office and refusing to leave without action. Their cause? A lack of protections for temporary agency workers.

They're protesting in light of the recent and fifth death of a temp worker at Fiera Foods, a North York industrial bakery that supplies retailers such as Sobey's and Dunkin Donuts.

A couple weeks ago, the 57-year-old father was killed by a machine that turned on while he was cleaning it.

Five temps have died from workplace accidents at this factory or one of its affiliates since 1999, and in 2017 an investigation by Toronto Star reporter Sara Mojtehedzadeh revealed that tempt workers receive minimal training upon being hired.

In Ontario, companies who hire workers from temp agencies are not required to compensate them for workplace injuries, as they are temporary contractors and not considered employees.

And though a measure was introduced by the previous Liberal government to fix this, the Ford government has yet to implement the section of the Workplace Safety and Insurance Act which would protect more temp agency workers from getting hurt.

Activists are camped outside his office with signs encouraging him to enact the law and chanting "No more deaths," while others occupy the inside of the office. Protestors are also reading out the names of the five workers who were killed at Fiera Foods.

Activists have already been on site for hours and they're pledging to stay indefinitely — they're even hosting a movie screening at 9 p.m. and giving out pizza.

Members are urged to visit the #occupyford movement at the constituency office of #DougFord 823, Albion Road. Come for the fight, stay for a movie at 9pm tonight. Join the the occupiers who will be here until he agrees to #enactthelaw that will protect workers on the job. pic.twitter.com/o64irUErKC

It remains to be seen how long they'll really stay, but perhaps just long enough to get Ford to sign section 83(4) of the Workers Safety and Insurance Act.

by Mira Miller via blogTO
Posted by Arun Augustin at 3:56 PM