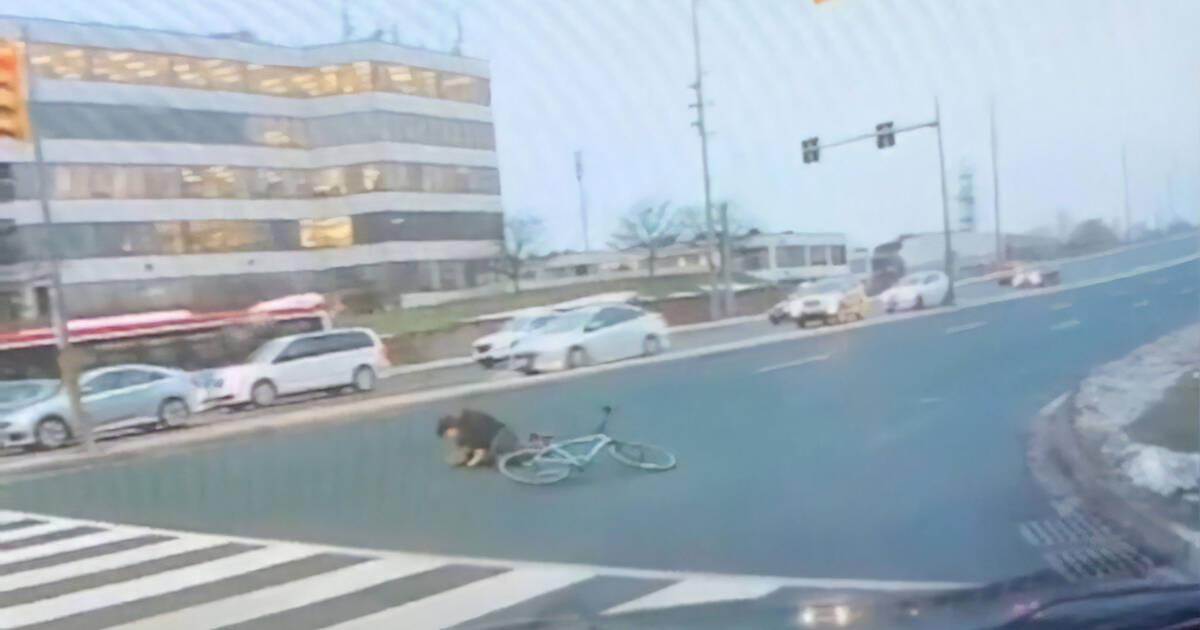 A video depicting a dramatic run-in between an SUV and a cyclist has been making its rounds on social media.

The footage, taken at Warden and 14th Avenues just north of Toronto in Markham, shows a Mercedes-Benz SUV turning right, running directly into an individual riding their bike across the street at the crosswalk and knocking them to the ground.

A car rammed into a cyclist in Markham and it was all caught on video. Luckily the cyclist was not badly injured. The driver was arrested. #bikeTO #Markham #Toronto pic.twitter.com/8CMMUNRWHq

The motorist proceeds to speed off, driving over a traffic median and veering into oncoming cars on the other side of the road.

Before the impact, the cyclist appears to reach out toward the vehicle, as if to signal to the driver. As the car drives away, the individual is left laying in apparent pain in the middle of the street.

The accident took place on the morning of November 21.

The odds of a cyclist injuring or killing someone are minuscule compared to a 3000 lb SUV doing the same. Deal with the low hanging fruit, ie drivers, first.

Though it appears at first that the driver was attempting to escape the incident, which was posted to social media as a "hit and run," the car in question can be seen braking near the end of the video, and CP24 reports that the driver "stopp[ed] and turn[ed] around when it was safe."

According to CP24, the cyclist was not seriously injured and was fortunately able to walk away relatively unscathed. And, the driver has been charged with careless driving.

If everyone just followed the rules of the road...both to blame here. Adults on bicycles belong on the road along with other vehicles, not on sidewalks and in pedestrian crossings.

Though the reaction to the video on social media has largely been one of shock and dismay directed at the driver, some residents have also pointed out that cyclists are meant to act as vehicles, riding only with the direction of traffic on roads and dismounting to walk their bikes if they are in areas designated for pedestrians, like crosswalks.

You’re supposed to dismount, and walk with your bike when crossing using ‘pedestrian’ crosswalk!

The footage has been disturbing to those who are already wary of the dangers motorists pose to cyclists and pedestrians in the city, which has seen a rise in doorings, other accidents and even deaths.

by Becky Robertson via blogTO
Posted by Arun Augustin at 10:50 AM