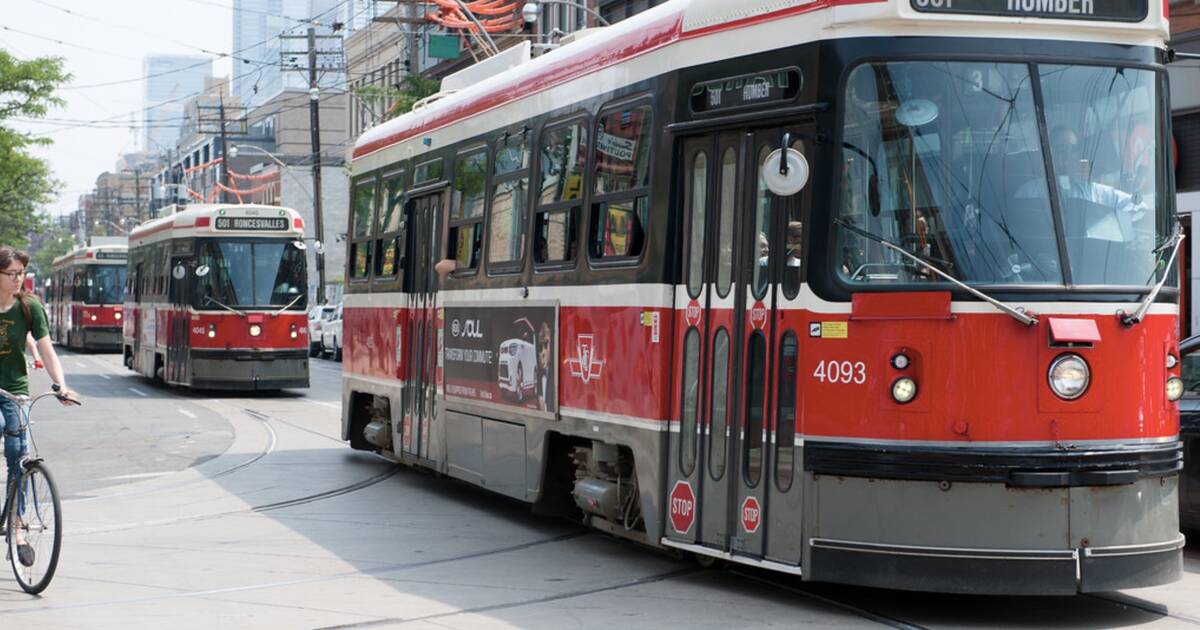 Things went off the rails yesterday for the TTC when they announced they would be removing the Queen Street 501 streetcars until further notice.

After crew members inspected the route through the night, it was discovered that something along the Queen street stretch has been damaging the brakes on the new cars.

According to a TTC spokesperson, 25 cars have already sustained damage from the mystery issue, and the streetcar service was pulled out of an abundance of caution.

According to one Twitter user, the issue made for a bumpy ride before the cars were pulled from the tracks

Was on a 501 westbound this morning when the breaks hit really abruptly and everyone in the aisle went flying (it's always way overcrowded in the mornings). 'Abundance of caution' is a big understatement. Lucky there weren't broken hips or worse.

Of course, whenever the rush hour commutes are made more difficult due to issues with the TTC, people get really upset.

I hope you plan to have an extreme amount of buses on this route. Streetcars are already full to the max during rush hour commutes, attempting to pack all those commuters in small buses is not going to work well at all. Certainly not the service we deserve for the price we pay.

The service change made for a packed and somewhat messy commute this morning.

@TTChelps please added more bus for Queen St 501 route. It’s so packed that many people could not get on this morning. Really poor planning on TTC part.

One Twitter user said that the service change on the route caused for some confusion as to where to get on and off the replacement buses.

The worst part is that the buses aren’t aware of the stops... just saw a bus going west miss passengers at a stop. The bus I’m currently on, said he did me a favour by stop where he did... a favour?! Park Lawn and Lakeshore is a stop for streetcars. So just do your job, maybe?

Some people were walking in circles when it came to finding the right stop at the Humber loop.

With a track record of issues in the past, this latest disturbance has people wondering why the city puts up with the streetcars at all.

ridiculous. so why do we keep streetcars? they only cause problems in delaying and causing so much traffic. when one streetcar is stuck the entire street is a mess too. so why are we keeping them? also fare has gone up bc of this stupid streetcars

While most people are annoyed by the service change, some are saying the replacement buses are for the better when it comes to quickly commuting.

The news acting like the streetcars on Queen St. being replaced with buses is a bad thing... No, no I'm actually not upset with the prospect of being on a faster vehicle that can navigate traffic better. #TTC

The other pressing concern with the service disruption is how the change will affect Instagram pictures-obviously.

But despite all the annoyance and confusion the issue has caused, it's important to remember that the streetcars were pulled for everyone's safety.

People. Don’t hate on TTC for this decision. This actually makes sense from a safety standpoint. Instead focus on the thousands of preventable poor decisions they make on a daily basis. Like yesterday’s rush hour track work that delayed 100s of thousands. We need change at TTC.

Hopefully the issue will be solved sooner than later.

by Olivia Levesque via blogTO
Posted by Arun Augustin at 8:35 AM