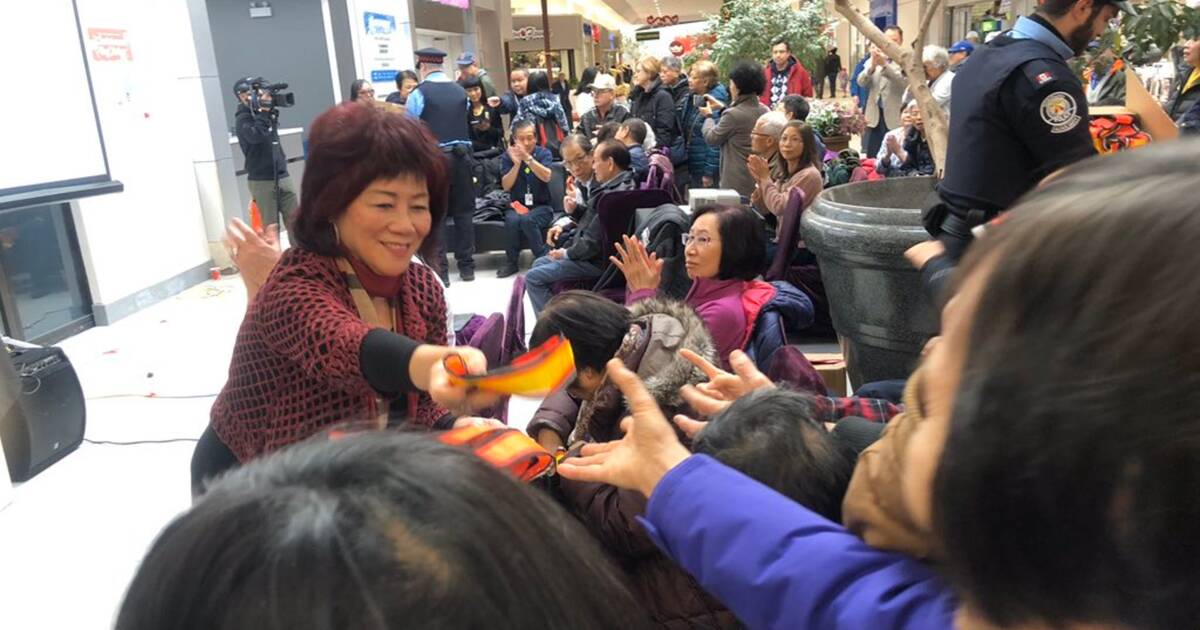 An initiative to help increase road safety for seniors is sparking outrage across Toronto as many are saying the move unfairly blames pedestrians for the recklessness of drivers.

Toronto Police held a pedestrian safety session at Woodside Square Mall in Scarborough this past weekend to educate seniors — who are considered extremely vulnerable road users — about the importance of road safety.

During the session, which was initiated by City Councillor Cynthia Lai, officers gave safety tips and handed out reflective orange arm bands to those in attendance.

Happening now: Toronto police are handing out arm bands at a pedestrian safety event geared towards seniors in Scarborough, the day after two seniors were hit in the city. So far this year:
-1100 pedestrians have been struck in Toronto
- 31 pedestrians killed
- 9 of them seniors pic.twitter.com/OR2BR0crvK

And on Friday, the day before the safety event, two seniors were struck by vehicles and sent to hospital with life-threatening injuries.

In light of the many pedestrian fatalities reported already this year, many have criticized Toronto police for failing to enforce traffic rules — something they've admitted has contributed to the amount of collisions across the city.

Now many are saying the arm band initiative effectively blames pedestrians for collisions rather than actually doing anything concrete about the issue.

If a driver can hit a police cruiser WHILE ITS LIGHTS ARE FLASHING, what chance do pedestrians have no matter how bright their clothing is?

This is the second time in less than a week that Toronto police have been accused of pedestrian victim-blaming, after Police Chief Mark Saunders cited people wearing AirPods as a safety concern during a meeting of the Toronto Police Services Board last Thursday.

Advocate Jessica Spieker of Friends and Families for Safe Streets told CBC News that evidence shows initiatives like the arm bands do nothing to help prevent pedestrian fatalities.

"They're out there doing something that the evidence shows us does not work and is in fact a form a victim blaming," she said.

One Toronto resident also said the arm bands are patronizing to seniors.

Patronizing to #seniors! anyone ask if persons being given these arm bands want them? Infantalizing seniors is not going to solve the larger traffic issues which @TorontoPolice and @marksaunderstps are happily ignoring. @picardonhealth #topoli #TorontoTraffic @JohnTory https://t.co/gDYykLFqOa

"It’s hard not getting furious that in the past week, Toronto Police have admitted their lack of traffic enforcement has led to more injury and accidents, but those impacted by this are told to wear arm bands and chided for air pods," one Twitter user said. "We should be furious"

In a statement issued Sunday, Toronto's deputy police chief Peter Yuen said the arm bands are being made available because "visibility is a key contributing factor in many pedestrian and traffic incidents."

Yuen also said a dedicated Traffic Enforcement Team will be targeting high-collision areas, and that police have issued 177,000 tickets to drivers already this year.

"The Mayor has repeatedly stressed everyone must do their part to stop these preventable deaths and injuries but that the primary onus rests with drivers in powerful steel vehicles," reads a statement from Mayor John Tory's office on the issue.

"Mayor Tory wants to see any and all effective measures taken to eliminate preventable deaths and injuries on our roadways."

by Mira Miller via blogTO
Posted by Arun Augustin at 12:20 PM