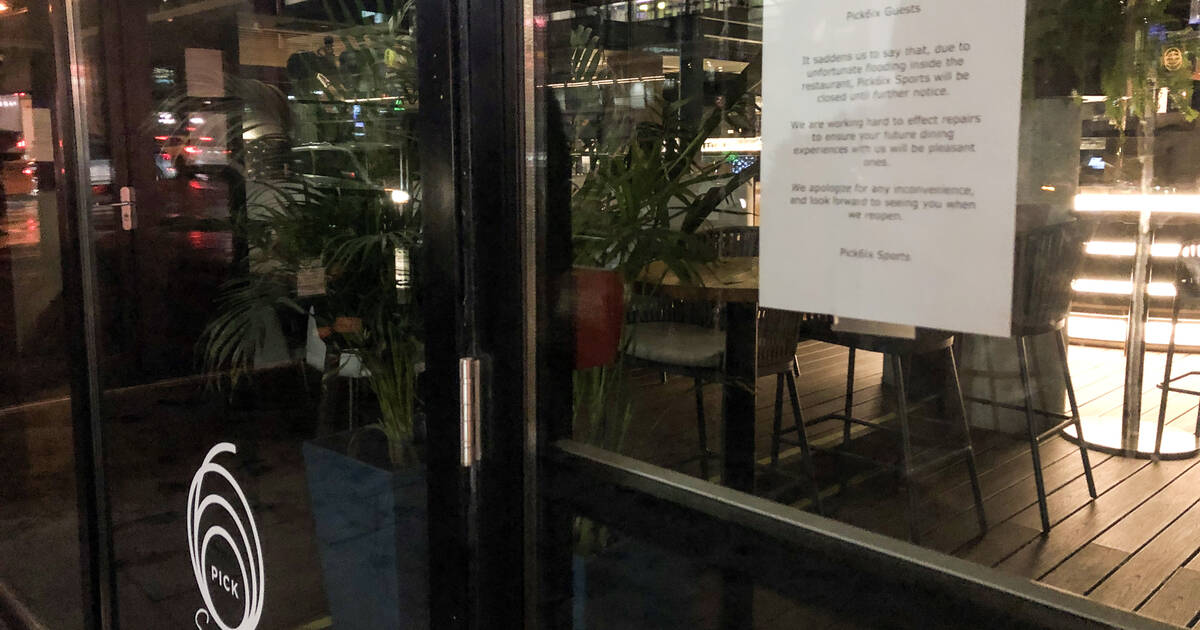 Earlier this week, the PR team behind Drake's swank sushi joint-turned-sports bar Pick 6ix announced that the downtown Toronto restaurant had closed on account of water damage, for a second time.

"Unfortunately, due to flood, Pick 6ix Sports will be closed till further notice," reads a message posted to the venue's Instagram account on Tuesday. "Stay tuned for our reopening."

Signs bearing a similar message have now been posted on windows around the restaurant at 33 Yonge Street itself.

Addressed to "Pick 6ix Guests," the message states again that Pick 6ix is closed "due to unfortunate flooding inside the restaurant" and that staff are "working hard to effect repairs to ensure your future dining experiences with us will be pleasant ones."

The flood story may very well be true, but I wouldn't hold your breath. 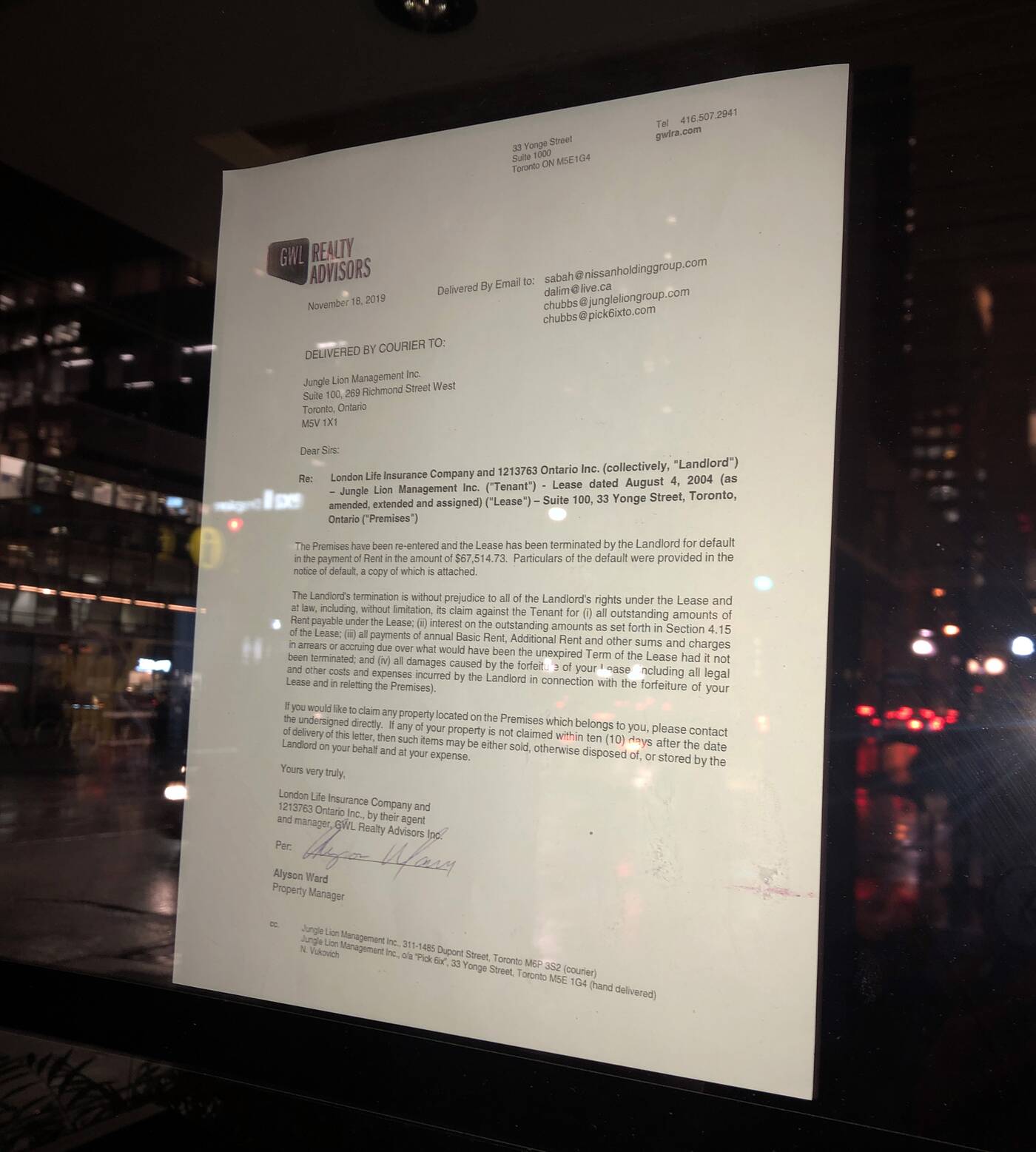 A second set of papers posted to the sports bar's Yonge Street and Brookfield Place entrances indicates that the property has been seized by its landlord as of November 18 for owning nearly $70,000 in back rent.

The restaurant's owners — which include Toronto's most-famous rap export and his OVO crew member Nessel "Chubbs" Beezer — are thus currently barred from entering the property.

"The Premises have been re-entered and the Lease has been terminated by the Landlord for default in the payment of Rent in the amount of $67,514.73," reads the notice, which is addressed to Jungle Lion Management Inc. and was emailed to both Chubbs and famous Dutch businessman Sabah Nissan.

As is typical in such a situation, the unit's landlord — London Life Insurance Company — has given Chubbs and the gang ten days to claim any personal property located inside the restaurant. Anything that goes unclaimed may be sold or disposed of after November 28. 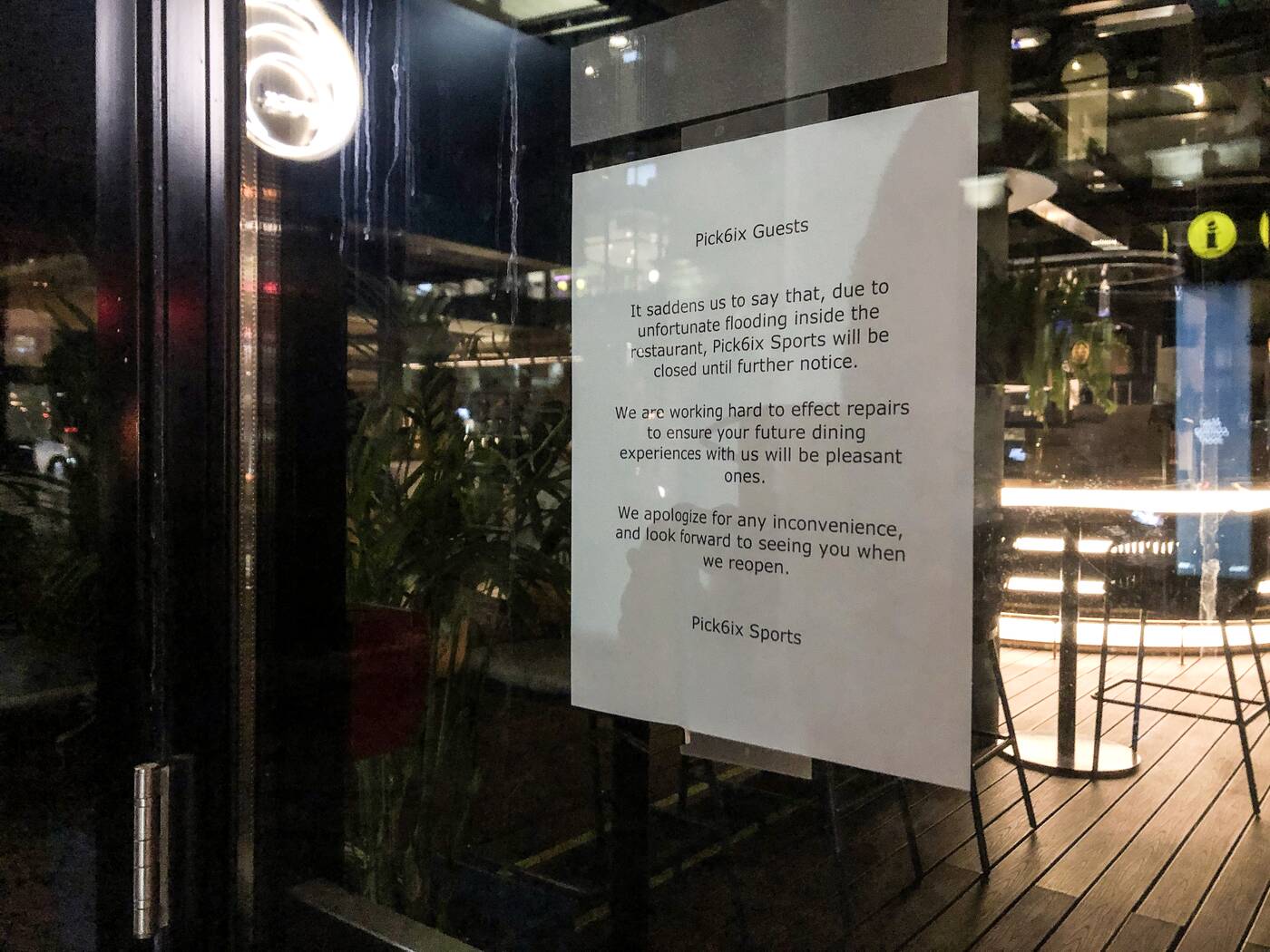 The letter makes no mention of an option for Pick 6ix to pay up and keep the unit.

Being that the lease has already been terminated, it's unlikely that even Drake would be able to swoop in and save the day without throwing down some serious coin.

If this is, indeed, the end for Pick 6ix, it will best be remembered for hosting a slew of private star-studded parties in January of 2018, and for its speedy pivot from glitzy supper club to modern sports pub later that year.

Just a few months before the rebranding, allegedly prompted by damage sustained during the severe floods of summer 2018, 28-year-old Jaiden Jackson was shot and killed while leaving a private party at Pick 6ix.

It is not known if Drake was present at the time of the May 2018 shooting, though police said that it happened during an invite-only party for the Grammy-winning artist.

by Lauren O'Neil via blogTO
Posted by Arun Augustin at 6:54 AM