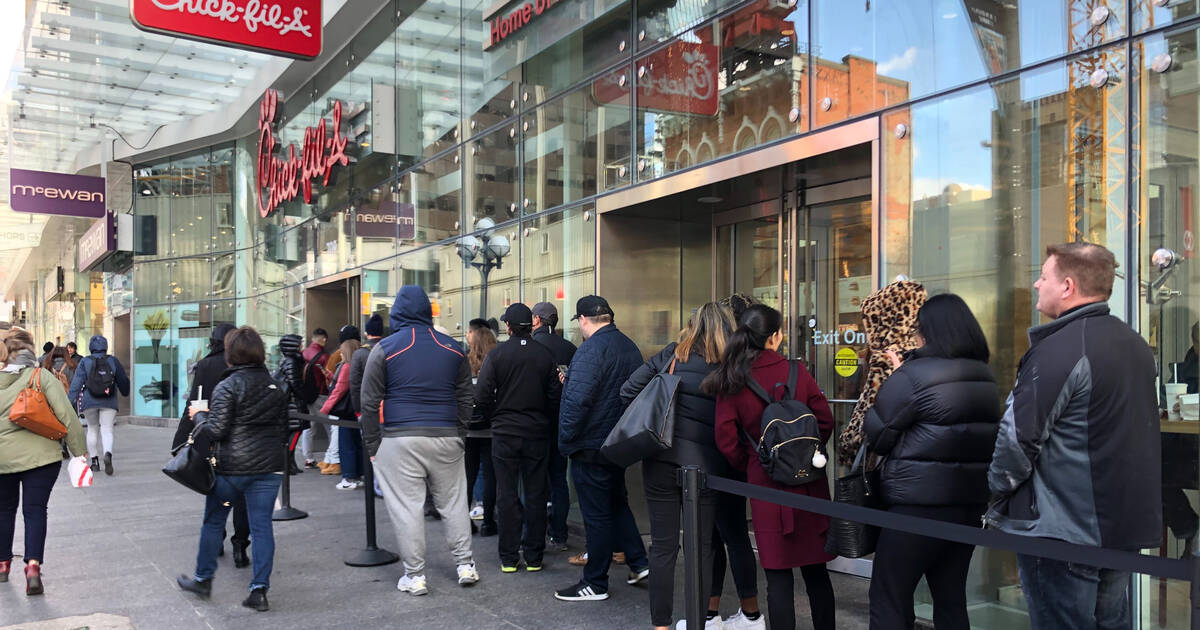 It would appear as though protests, counter-protests, die-ins and even literal vermin aren't enough to scare people away from the controversial new Chick-fil-A location in Toronto.

It's been lined up around the block ever since, bustling from opening time at 7 a.m. until it closing time at 10 p.m. — but never on Sundays, mind you. Chick-fil-A does not operate on the Lord's Day.

So the first Chick fil a opened in Toronto and I thought the lines would have died down by now but I was wrong... pic.twitter.com/VZqaUfrqzP

The company's Sunday rule, mandated by Chick-fil-A's hyper-Christian founder Truett Cathy as a way to honour God, is said to cost as much as $1 billion per year in sales.

It took only eight days for activists to shut down Chick-fil-A's first location in the U.K. last month and yet, somehow, the joint is still thriving in Canada — and only steps away from Toronto's Church and Wellesley village at that.

Y’all, there is still a line at @ChickfilA Yonge and Bloor in Toronto! pic.twitter.com/hSqUKtOft5

To some people, the answer is obvious: Fried chicken (with a side of cluelesness, maybe?)

Had some Chick-fil-a in Toronto. It was a 32 minute line wait. The LGBQTLMNOP was out there protesting “boycott chick-fil-a”. This was quite entertaining. I would wait in this line for 2 hours with this kind of entertainment. Their behaviours are actually promoting. Great chicken

Others are baffled by the sheer volume of people queuing up, waiting in line for hours to patronize Chick-fil-A despite all of the controversy.

Look what the condos dragged in! #Toronto lines up for a taste of @ChickfilA, the homophobic fast food chain, just a stone's throw from the @ChurchWellesley Village. #gentrification #howtokillacity pic.twitter.com/7hXcocfE93

"I walked by a Toronto Chick-fil-A today and was disturbed to see a line up out the door," tweeted video game expert Ajay Fry on Saturday.

"I wanted to ask the folks in line if they were unaware or aware and apathetic to the companies awful ownership and affiliations."

Folks are a lot less ‘woke’ when it means sacrificing their personal desires.

"They tried opening in the U.K. and had to close within like... a week? I think?" replied one of Fry's followers. "Because nobody would stand for their shit. Between this and the TPL I’m feeling real let down by Toronto right now."

the line outside Toronto’s @ChickfilA, a business that contributes millions of dollars to oppose gay marriage and fund conversion camps. pic.twitter.com/WC4qa1BDCs

"I think that a lot of them are aware," replied another. "It seems to have become a destination of choice for edgelords looking to 'Own libs'."

"I'm tempted to walk past and flip off everyone in line."

by Lauren O'Neil via blogTO
Posted by Arun Augustin at 3:20 PM