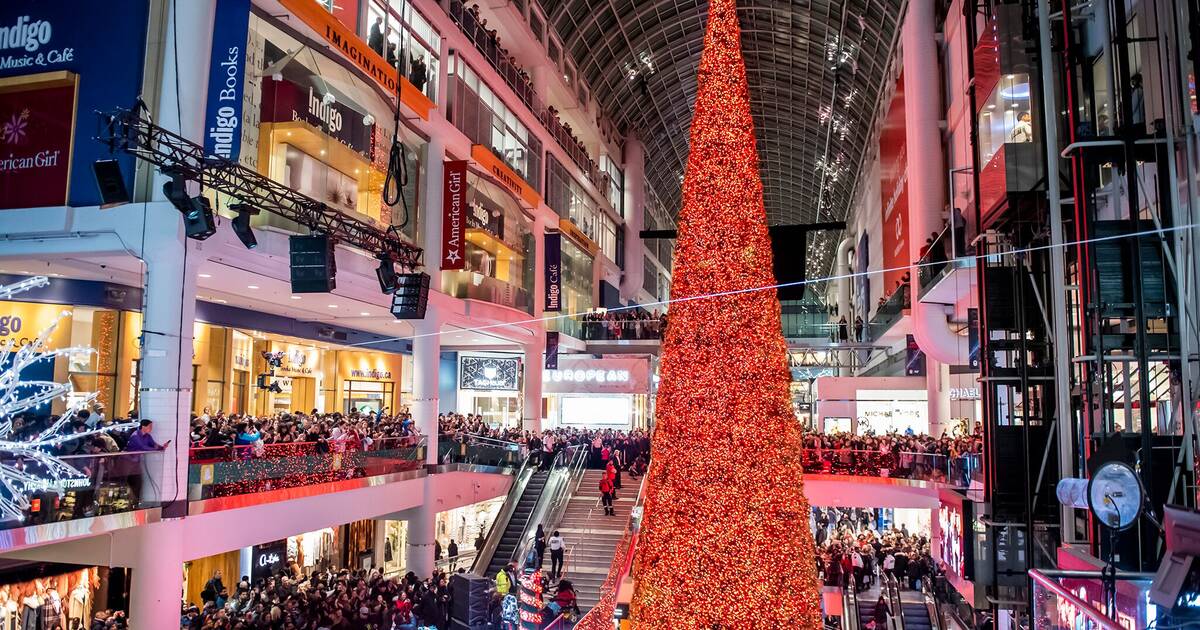 The holiday season has arrived in Toronto with the Eaton Centre's annual lighting of its massive, magical Christmas tree — the largest of its kind in all of Canada at 108 feet tall.

An estimated 15,000 people crowded inside the iconic downtown mall on Thursday night to watch as officials dropped the blue curtain that's been hiding this year's tree for weeks.

Huge crowds are at the Eaton Centre tonight to watch the 108 foot Christmas tree light up 🎄 pic.twitter.com/WkCuYFDGK5

Revelers had plenty of fun dancing to a live DJ while waiting for the tree to be lit.

When the lights came on, they did so in spectacular fashion.

Canada's largest Christmas tree is all lit up for the holidays 🎄 #Toronto #Christmas #EatonCentre pic.twitter.com/P22i9B9s8y

In total, this year's Eaton Centre Christmas tree boasts 160,000 LED lights. You'll find it in the mall's Centre Court at Level 2. It's virtually impossible to miss.

Cool lights and sheer size weren't the only draws for this year's holiday kickoff at the mall, either.

You know when your Holiday season is going to be a grand slam when 2019 US Open Champion Bianca Andreescu, Santa, Dr. Draw and friends kick off the Toronto Eaton Centre's Holiday tree lighting ceremony. #ChristmasTree #SheTheNorth #SeeTorontoNow @CFtoeatonCentre @spexontoronto pic.twitter.com/h4MFHQFbxO

On hand to MC the tree-lighting festivities was none other than Mississauga-born tennis champion Bianca Andreescu, who in September beat Serena Williams to become the first Canadian Grand Slam singles title winner in the history of the sport at just 19 years of age.

Andreescu, who attended the tree-lighting ceremony as a member of the crowd last year, says she was thrilled to be this year's guest of honour.

"It's been truly a blessing. I really don't know the impact I'm making," she said to CTV on Thursday night. "I am just beyond grateful. I'm really happy to kick off the holiday season here."

by Lauren O'Neil via blogTO
Posted by Arun Augustin at 7:40 AM