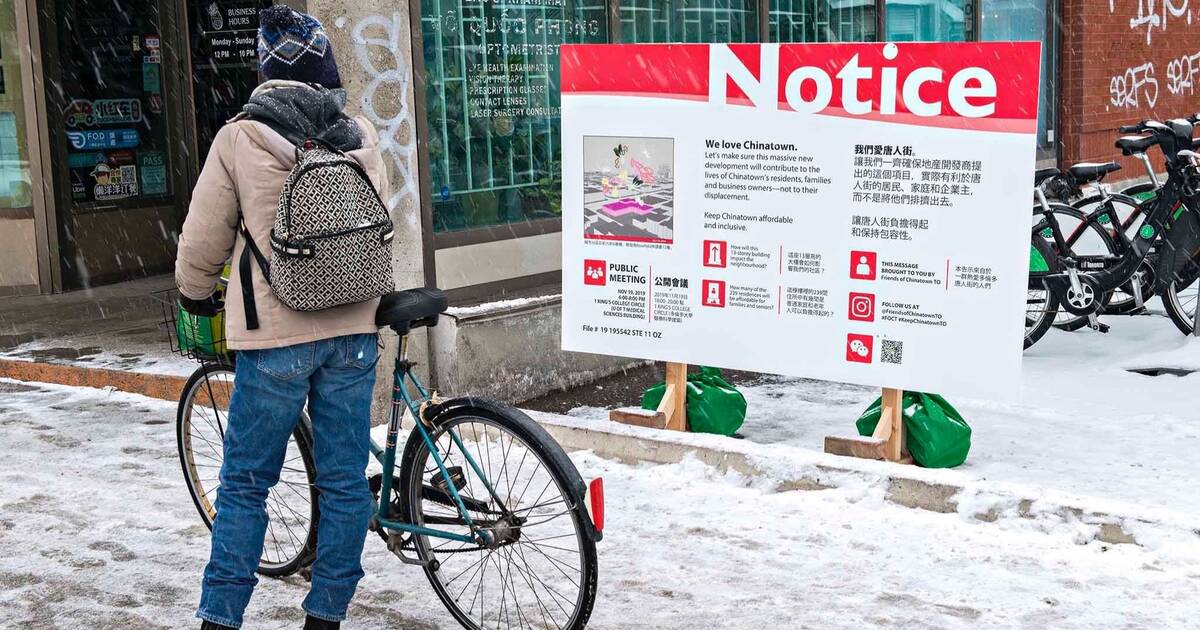 A newly erected sign at the corner of D'Arcy and Spadina looks exactly like a City of Toronto development sign, but if you look a little closer you'll see its content isn't the same at all.

The sign was put up earlier today by Friends of Chinatown TO, a community grassroots organization in Chinatown. The group created a parody version of the official development sign in front of Rol San — a staple dim sum spot in West Chinatown that could soon face demolition.

The #FOCT parody sign is now up at the corner of D'Arcy and Spadina, just a few steps down from the official @cityoftoronto development sign. Ours looks a little different tho ~ #flyingbokchoy #KeepChinatownTO pic.twitter.com/xkoFPAGsrp

Plans for a 13-storey, mixed-use building designed by Montgomery Sisam were submitted to the city a few months ago. If the project goes ahead, it could mean the closure of more than 10 longtime Chinatown businesses, including the beloved neighbourhood staple Rol San.

"We love Chinatown," the parody sign reads. "Let’s make sure this massive new development will contribute to the lives of Chinatown’s residents, families and business owners  — not to their displacement. Keep Chinatown affordable and inclusive."

The sign also asks questions such as "How will the 13-storey building impact the neighbourhood?" and "How many of the 239 residences will be affordable for families and seniors?"

The parody sign also draws attention to the fact that the city's official sign only has text in english.

"Language inaccessibility keeps non-English speaking, immigrant and newcomer communities in the dark about potential changes to the composition of the neighbourhood," said Amy Lam, a FOCT organizer.

FOCT's version of the sign includes writing in both english and traditional Chinese.

"Including a translation acknowledges the demographic of the neighbourhood and invites the residents to become informed," a FOCT press release states.

The group says their sign aims to demonstrate the proper use of a service that the City has overlooked or withheld by failing to include the proper translations.

"The parody sign by FOCT aims to set a standard of transparency that the City does not possess and highlights an oversight in transparency when it comes to civic processes that can potentially efface the social ecology of diasporic communities."

FOCT is encouraging residents of West Chinatown to attend the City’s community consultation on November 19 from 6 to 8 p.m. at 1 King’s College Circle.

by Mira Miller via blogTO
Posted by Arun Augustin at 3:34 PM