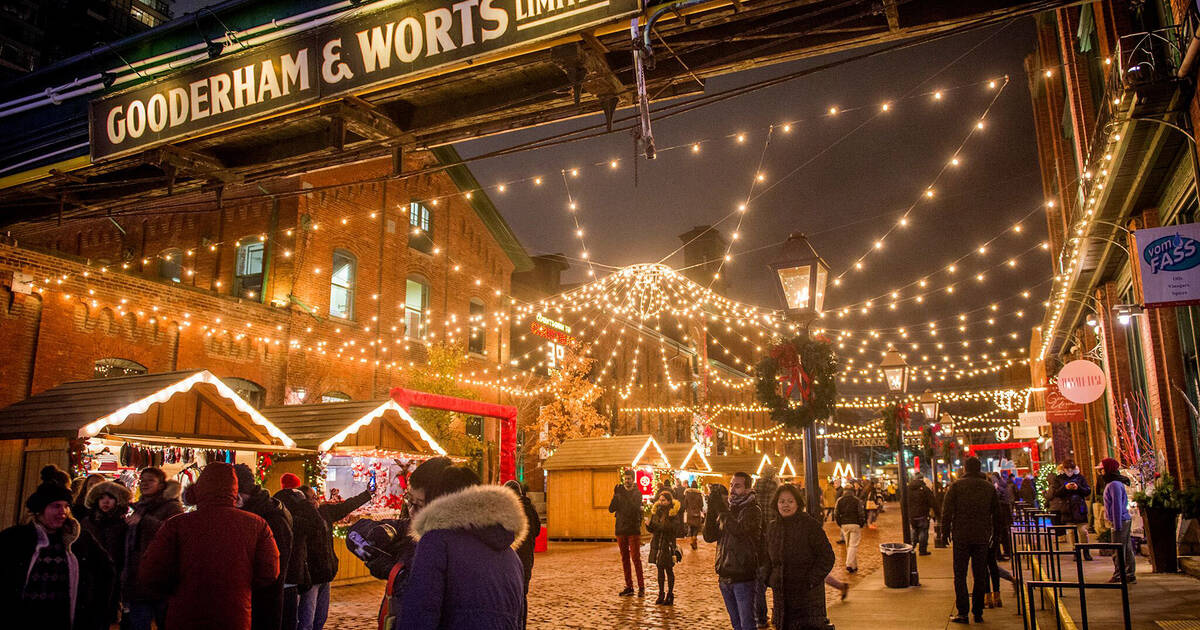 Things to do in Toronto this weekend are ushering in the holiday season as the Christmas Market opens and the Santa Claus parade returns. Indie Week continues to fill the city up with music and there's a big beer pong festival. Film festivals galore, parties and more are on, too.

Indie Week (November 13-17 @ Multiple Venues)
Hundreds of indie musicians and singers are taking the stage at places all over the city over five nights of music, parties, listening sessions and panels.
Toronto Christmas Market (November 14 - December 22 @ The Distillery District)
Toronto is ready to get into the holiday spirit as this big European-style Christmas market returns with festive food, drinks, gifts and performances.
Beer Pong Festival (November 16 @ Rebel)
Assemble your crew for huge beer pong festival, featuring 100 tables stacked with cups and brews, plus music bumping all night long, and prizes.
Santa Claus Parade (November 17 @ Bloor Street)
Santa Claus is coming to town during this massive parade with festive floats travelling through the city along a new route this year.
Taste of Iceland (November 14-17 @ Luma)
Toronto's annual Icelandic food festival is back with specialty dishes served up by Chef Gísli Matthías Auðunsson in celebration of Icelandic culture.
Sound & Fury (November 16 - December 7 @ Artscape Weston Common)
Music, dance, and spoken word collide for a contemporary, 90s hip hop and poetry-inspired take on Shakespeare's Macbeth.
Pomegranate Film Festival (November 13-17 @ Multiple Venues)
Armenia's history, culture and people are at the heart of this film festival that includes screenings, special guests and programming.
Architecture & Design Film Festival (November 14-17 @ TIFF Bell Lightbox)
The histories and stories of interesting and significant works of architecture and design are the focus of the film festival with talks, events and more.
The Man Who Fell To Earth (November 15 @ TIFF Bell Lightbox)
David Bowie stars as an alien whose left his planet in search of water in Nicolas Roeg's trippy and fascinatingly cryptic sci-fi tale.
Shorts That Are Not Pants Film Festival (November 15-16 @ Bachir/Yerex Presentation Space)
Back again is this quirky short film festival with works by filmmakers from all over the world showcasing shorts in a variety of genres.
Syria Film Festival (November 15-17 @ Art Gallery of Ontario)
Newcomers arriving in Canada, child marriage and living under siege are some of the subjects at the centre of this year's Syria Film Festival.
Trixie Mattel: Moving Parts (November 16-28 @ Hot Docs Ted Rogers Cinema)
There's a lot more to Drag Race star Trixie Mattel than a charismatic public persona and this documentruat looks at the man behind the makeup.
Shortfish (November 17 @ The Royal Cinema)
Part of Taste of Iceland, this film festival includes shorts that centre on the work of up-and-coming Icelandic filmmakers.
Dom Dolla (November 15 @ Toybox Toronto)
Deep grooves arrive with Dom Dolla and his silky smooth house beats, samples and mixes that will get you moving on the dance floor.
Alex Cameron (November 15 @ Phoenix Concert Theatre)
The 80s sound is back in a big way with Alex Cameron's synth pop tunes that are full of cute and quirky sounds that recall the days of EZ listening.
Laidback Luke (November 16 @ Rebel)
Legendary producer Laidback Luke is still making hits to sweat to and he's bringing all his old and new electro and house hits to Toronto for the night.
Dune Rats (November 16 @ Lee's Palace)
You're gonna wanna crack open a cold one for Dune Rats as they bring their grainy punk pop tunes to the stage with Bad Waitress and BLANKS.
Hip Hop Sounds (November 17 @ The Baby G)
Toronto's hip-hop scene has never been hotter and this showcase brings together the best up-and-coming names in the city for a night of fresh flows.
Clairo (November 17 @ The Danforth Music Hall)
This is the second of two (and the one with tickets left) Clairo shows that will see the budding singer and musician make her solo Toronto debut.
Friday Night Live (November 15 @ Royal Ontario Museum)
Party it up in the museum as #FNL returns for a night of beats in celebration of 30 years of Masterplan, Canada’s longest running hip-hop radio show.
Strapped (November 15 @ One Loft)
it might be cold outside but it's hot at this sexy dance party where soca will go head to head with dancehall that will have the dance floor fired up.
Céline Dion Dance Party (November 15 @ Gladstone Ballroom)
The Queen of the North is being celebrated at this annual dance party with a night of her biggest hits, misses and mixes courtesy of DJ Phillippe.
Objekt (November 16 @ 163 Weston Rd)
Get ready to dance late into the morning as Berlin-based DJ Objekt spins the best bass alongside Korea Town Acid, City Dance Corporation and Wiretapping.
Textile Treasures Sale (November 15-16 @ St. Matthew's United Church)
Calling all decorators for this big textile sale that features fabric, fine wool and silk dressmaking fabric, vintage clothing, linens and more.
Trinity Bellwoods Flea (November 17 @ The Great Hall)
Candles, clothing, chocolate and cards are just some of the many goods available from local makers at this big market with everything for the holidays.

by Lisa Power via blogTO
Posted by Arun Augustin at 9:34 AM