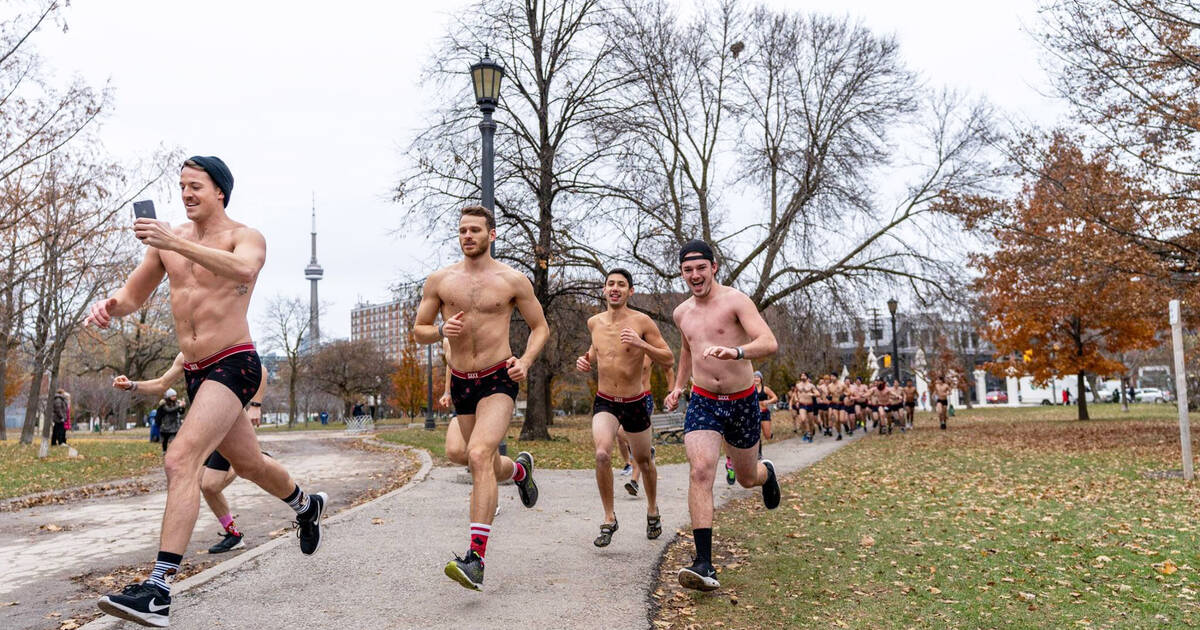 Things to do in Toronto this weekend have lots of fun stuff going on to get you out and about, like lots of film, markets and music. Folks are running through the city in their undies and there's a huge vintage book sale. Fill up on pie or shake your booty at a party — it's all going down!

Hot Docs Podcast Festival (November 6-11 @ Hot Docs Ted Rogers Cinema)
Pump up the volume as some of the biggest names in podcasting drop by for a week of programming that includes live shows, talks and lots more.
Reel Asian International Film Festival (November 7-15 @ Multiple Venues)
Taking a look at Asian and diasporic cinema, this film festival includes presentations, galas, artist talks, programming, panels and free events.
2SQTBIPoC Arts & Zine Fair (November 9 @ Toronto Media Arts Centre)
Back again is this zine fair dedicated to work by local artists that are two-spirit, queer and trans, Black, Indigenous and/or people of colour.
Día de los Muertos (November 9-10 @ Harbourfront Centre)
Back again is this big celebration of Mexican culture with a weekend of traditional Día de los Muertos festivities like food, music, films and more.
Ozmozis (November 10 @ Evergreen Brick Works)
Ozmozis is back and heating things up with a day of electro music featuring Gioli & Assia, Tinlicker, Jody Wisternoff and Kollektiv Turmstrasse.
Old Book and Paper Show (November 10 @ Artscape Wychwood Barns)
Hardcore collectors and bibliophiles of all kinds are welcome at this big show that features rare books, paper, prints, maps, photos and lots more.
Undie Run (November 9 @ The Citizen)
Folks are getting ready to strip down and run through the city in their undies during this annual Movember fundraiser to raise awareness for prostate cancer.
Nordic Fest (November 10 @ Henderson Brewing Co.)
Dress warm for this Scandinavian-inspired outdoor party with a day of fun, including axe throwing, music, games, crafts and a market.
Do Pie (November 10 @ A-Game Cafe)
It's peak apple pie season and this contest will see local bakers face-off to see whose pie reigns supreme, with all proceeds going to charity.
Geowulf (November 8 @ Drake Underground)
Things are about to get dreamy with Australian pop duo Geowulf and their upbeat and fun tunes that sound like a summer's day.
Wavelength Monthly (November 9 @ Brothers Dressler)
Get to know the country's music scene as musicians from different genres make their way to Toronto for a night of music with Munya and DijahSB.
Big Wild (November 9 @ The Danforth Music Hall)
Get ready to groove to some stellar electro tunes that mix in funk, EDM and bass sounds being played alongside EVAN GIIA and Ark Patrol.
Ra Ra Riot (November 10 @ Mod Club)
Things are going from bad to worse with indie stars Ra Ra Riot and their eclectic sound played alongside the hugely infectious mixes of Bayonne.
Queer Film Festival (November 7-10 @ Multiple Venues)
Independent queer cinema is at the centre of this film festival with works that explore queer peoples' histories and stories through video art.
Female Eye Film Festival (November 7-11 @ Multiple Venues)
Work by women directors are the focus of this festival that includes films from all over the world, plus special guests and talks.
Serbian Film Festival (November 7-17 @ Multiple Venues)
Back again is this film festival that looks at Serbia and its people, culture and history with over 130 movies from south-east Europe.
EstDocs (November 8-10 @ Multiple Venues)
Documentaries, shorts and feature films are screening during this film festival that focuses on Estonia and includes programming and more.
The Irishman (November 8-19 @ TIFF Bell Lightbox)
Martin Scorsese's 3+ hour crime epic has been generating tons of buzz for its all-star cast that includes Robert De Niro, Al Pacino and Harvey Keitel.
The Great Canadian Sketch Comedy Film Festival (November 9 @ Carlton Cinema)
Get ready to laugh as this film festival showcases some of the best sketch comedy films from around the world.
Afro Haus (November 8 @ Round)
The grooviest beats are on at this dance party with a night of afrohouse, gqom, afrobeats, ancestral house, kuduro and afrotech.
Friday Night Live (November 8 @ Royal Ontario Museum)
It's on inside the museum with an evening of music, art, food and drinks that's taking it back to a time when vinyl was fresh off the press.
Boosie Fade (November 8 @ The Shop)
Boosie Fade is back with a night of music with local DJs spinning the best hip-hop, plus art, drinks and lots of dancing.
BOOKEnds Used Book Sale (November 7-9 @ BOOKEnds North)
Books in all genres are up for grabs at this big sale with items available for anywhere between 10 cents and 6 dollars.
Whole Life Expo (November 8-10 @ Metro Toronto Convention Centre)
Everything you need to live your best life is on at this huge expo with almost 200 vendors showing of the latest in lifestyle and wellness products.
Parkdale Flea (November 9 @ Northern Contemporary Gallery)
Back again is this flea with unique items made by local vendors and cool new finds, including gifts, bath and beauty, home and clothing.
Eco Lifestyle Market (November 10 @ The Great Hall)
Living green is easy with so many local vendors creating innovative and cool eco-friendly items, a lot of which you can pick up at this market.
Afro-Caribbean Vegan Holiday Market (November 10 @ The 519 Community Centre)
The holidays are almost here and this market specializes in Afro-Caribbean vegan food, drinks, gifts, health and beauty, clothing and art.
Wonder Holiday Märkit (November 10 @ Gladstone Ballroom)
The holidays are here at this curated market with specialty vendors selling a variety of gifts and goods for everyone on your list.
Leslieville Winter Market (November 10 - December 22 @ The Redwood Theatre)
The Leslieville Farmers' Market kicks off a new season for winter that features local producers and makers selling seasonal goods of all kinds.
Royal Winter Fair (November 1-10 @ Enercare Centre)
It's the last weekend to see lots of cute animals and check out lots of food, drinks, shopping, entertainment and attractions.

by Lisa Power via blogTO
Posted by Arun Augustin at 8:35 AM