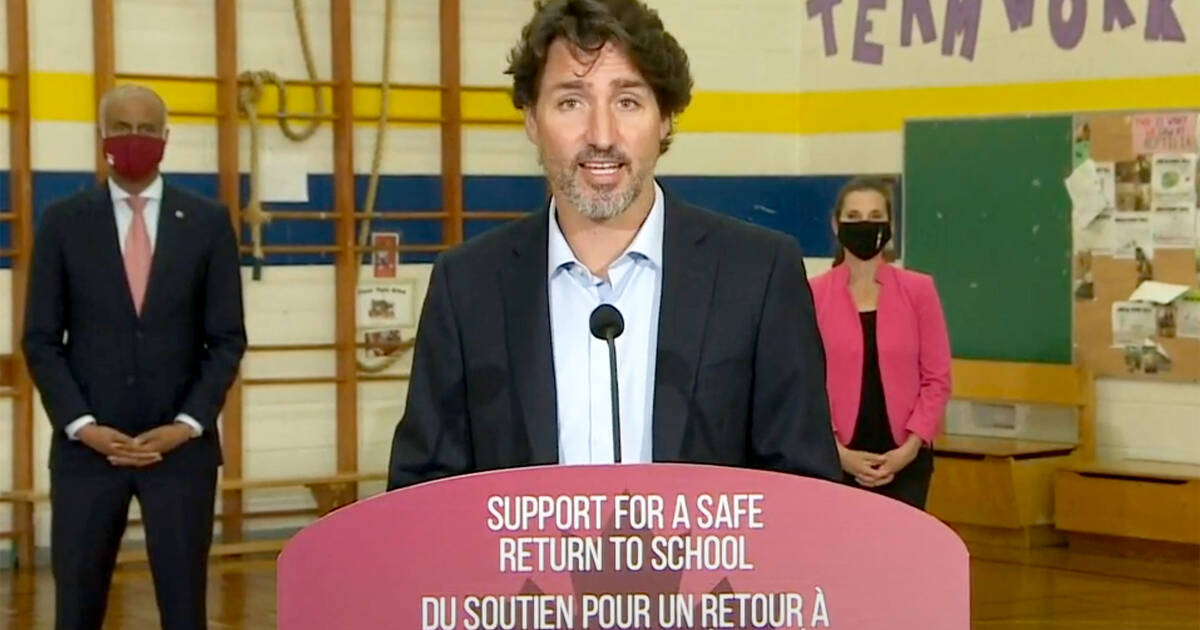 Prime Minister Justin Trudeau has announced that the federal government will be allocating $2 billion to help provinces and territories across Canada reopen schools safely.

In a press conference from Yorkwoods Public School in North York on Wednesday, Trudeau said that each province and territory will get a portion of that money, divided on a per capita basis based on student population, as well as a $2 million base amount.

Across the country, parents are worried about their kids heading back to school - as a dad, I get it. This morning, we’re announcing what we’re doing with the provinces and territories to help keep our kids and teachers safe. Tune in now for the details: https://t.co/guM7r7oqrT

"Fighting COVID-19 is a team Canada effort and we are all committed to continuing this fight into the fall," the prime minister said.

"The return to school is also an important step to restart our economy and get parents back to work while not worrying about the health of their children. The Government of Canada will remain a close partner to provinces, territories and First Nations as we work together to keep children, families, and all Canadians safe and healthy during this difficult time."

Funding will be handed out to provinces and territories in two instalments, the first in the fall and the second in early 2021.

In a follow up news release, the federal government announced how much money each jurisdiction will be receiving. Ontario is set to receive a total of $763.34 million.

This announcement has, unsurprisingly, sparked both criticism and praise across the country with some saying the funding has come too late.

Absolutely should have been done weeks ago!

"It’s a bit late isn’t it? Shouldn’t help be coming weeks ago? Kids start next week and this will take time to come out - just another failure," another person wrote.

Trudeau addressed this concern will answering questions at the press conference.

"This is a way for the federal government to be there for Canadians in what is a provincial jurisdiction."

He added that each province has its own back to school plan and that this money is a way to support the plans already set in motion. Each province and territory will be left to decide how to best use the money, which has sparked some backlash against Ontario Premier Doug Ford.

If these incremental funds are not dedicated @fordnation & @jkenney will use to reduce current funds! No increase in funding. #cdnpoli

"I hope that money is very specific on how it is spent. I can see Kenney and Ford charging $100 a mask for kids to hide the money for themselves," some wrote.

Others have praised the federal government for their support.

Thank you for thinking of parents & doing the best you can for Canadians. I am sending my Grade 1s back and hoping for the best. With these new funds, I hope @fordnation @Sflecce spend appropriately to give all our children a fair chance to go back to school safely!

"Thank you PM. You are doing the best you can for parents," someone else added on Twitter.

Of course this is not the only COVID-19 money the federal government has handed out and people are concerned about where it's all coming from.

Where is all the money coming from? We still have many more months to go with this pandemic!
Enough! #stopthemoneyflow #COVID__19 @cafreeland

Most public schools in Toronto are set to open on Sept. 15.

by Tanja Saric via blogTO
Posted by Arun Augustin at 10:48 AM