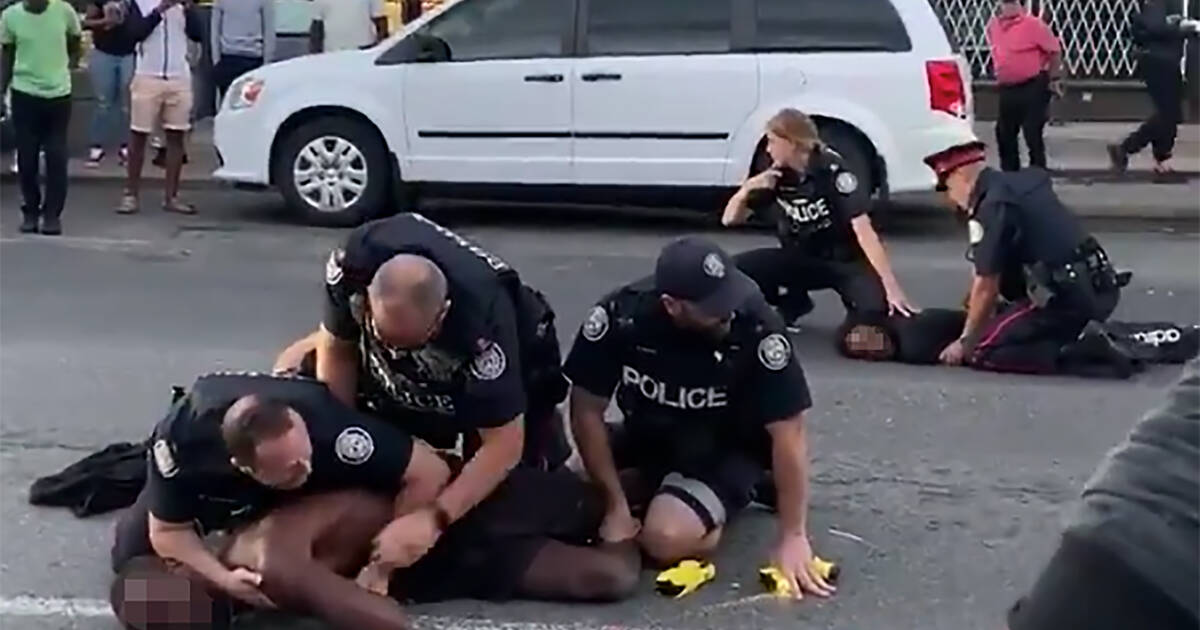 Disturbing footage of a 33-year-old man with apparent mental health issues being Tasered, tackled and arrested in Toronto's Little Jamaica neighbourhood on Saturday is raising questions today among members of the community and police critics.

According to the province's Special Investigations Unit, which is now investigating the altercation, Toronto Police Service officers were in the Eglinton Avenue West and Oakwood Avenue area during a peaceful protest event when they "were made aware of a man jumping on cars."

"An interaction ensued between the man and officers, including an officer deploying a conducted energy weapon," wrote the civilian police watchdog agency in a release on Sunday night.

"The 33-year-old man was arrested and transported to hospital for treatment. The Unit is awaiting confirmation on the nature of the man's injuries."

Heartbreaking videos from the scene show dozens of police officers surrounding the man as he wails in agony, pinned to the ground.

I was at the Eglington West Rally today

A community member was tazed and arrested suddenly after a skirmish in the street that organizers could have deescalated pic.twitter.com/TE3vm5o4VJ

Additional footage shows a second man attempting to help the first by swatting police away with his jacket. This man is also eventually pinned to the ground by cops.

TPS Const. Edward Parks told local news outlets that seven officers were injured during the arrest, four of whom went to hospital for treatment.

Parks said that one female officer was punched in the head, but the nature and extent of the other injuries — including those of the men who were pinned down — are unclear.

As of Sunday, all of the officers had been released from hospital and the two men had been charged with various counts of mischief, assault, obstruction, uttering threats and disarming a police officer.

Witnesses and event organizers are taking up issue with what police say went down, however, and are hoping that the copious amounts of video footage circulating help the SIU reach an appropriate conclusion (though it stands to reason that hopes aren't too high.)

After a man jumped on a car driving by during a protest, he gets arrested, then BLM gets upset that he is arrested. Several Officers were injured during altercation in ‘Little Jamaica’ Toronto yesterday. #cdnpoli
pic.twitter.com/yUrnPURjSe

Saturday's Bana on the Block Resistance Rally was organized by advocacy groups Reclaim: Eg West (RREW) and Black Urbanism TO to address gentrification in the Little Jamaica community, as well as economic devastation caused by the ongoing construction of Metrolinx's Eglinton Crosstown LRT.

The protest, like every other protest that Toronto has seen in recent months, was peaceful in nature, until police arrived. In fact, organizers say the man who was arrested was not even part of the rally — rather, he is a community member who "appeared to be homeless and exhibited signs of mental health issues."

"What we witnessed does not corroborate this statement by the Toronto Police Service, as we only saw the arresting officers, 2 officers, sustain any kind of force," wrote Reclaim: Eg West in a statement about the assertion that seven cops were injured during Saturday's incident.

"So that headline is completely false," wrote the organization Not Another Black Life of an article declaring seven officers had been injured.

"An Eglinton West community member was arrested during a peaceful protest against the gentrification and displacement of the Black community and Black-owned businesses in the historic Little Jamaica. He was tazed, attacked, and arrested by police."

TW:// Violence. Listen to the audio in this video, absolutely heartbreaking & infuriating. At one point a woman who works at CAMH pleads with the officers to treat him with dignity. TPS has no regard for black lives. #DefundThePolice pic.twitter.com/9o3WU2aI3K

Upset as they were about what had happened to the distressed community member, Toronto residents were perhaps even more disturbed by how many cops were sent in to deal with the situation.

"A little before 8 p.m., there was an incident where a Black community member struggling with mental illness was dancing on the top of and therefore causing minor damage to a civilian vehicle," reads the statement from RREW.

"As a result of this, police who were on site approached the car in an attempt to de-escalate the situation, though did not consult with our collective, who had seen and interacted with the community member and had human resources on site to deal with de-escalation," it continues.

"The civilian, triggered by the aggressive manner of the police, had swung on an officer and was tasered twice. After he was based, a friend of his intervened and there their sweater at the police, and was also arrested."

Approximately 65 police officers eventually arrived to the scene, according to RREW, as well as one paramedic.

Toronto Police sent this many cops to arrest *one* person but the folks who’ve been peacefully demonstrating since 4pm are the “hostile crowd”?? The way Eglinton West is criminalized and devalued is disgusting‼️ https://t.co/8VQvzn7AbQ pic.twitter.com/8UwvG59Ymn

Members of the community are also once again raising concerns about how police treat people with mental health issues during times of distress.

"Prior to the arrival of backup police reinforcements and the paramedic, organizers were successfully soothing the community member hands-on while he was pinned to the ground by police officers, but were abruptly stopped by the above-mentioned reinforcements," writes RREW.

The distressed man then reportedly grew even more upset and started resisting arrest.

"In response to this, police kneeled on his head, kicked and punched him repeatedly, and the Black women from the community who had been soothing him were removed by force without resistance by the police in an attempt to sever his ties to the community when he needed it the most."

At one point, in one of the videos, someone who says they work for CAMH can even be heard trying to help police treat the man with dignity.

They need billions of dollars of our city’s budget for funding so that they can do what? Employ hundreds of officers to taze mentally unwell Black folks out on the street? You can’t reform this. #defundTPS

The incident took place during one of at least 15 protests held across Toronto this weekend, many of them in support of defunding police amid a growing list of recent attacks by cops on Black Americans such as Jacob Blake, George Floyd, Breonna Taylor and Elijah McClain.

Calls for defunding the Toronto Police Service specifically rang out over the weekend after the SIU found officers not criminally culpable for the May 2020 death of 29-year-old Regis Korchinski-Paquet, an Afro-Indigenous woman who fell from the 24th floor of a High Park apartment building to her death during an interaction with police.

"Though our march centred the role of gentrification and displacement in harming lack lives and ripping apart Black communities," wrote RREW. "We also acknowledge that police forces are very willing players in enforcing the mandates of displacement rubber-stamped by municipal planning regimes."

"Under the immense pressure the community his facing from not only police but the provincial and municipal governments, this need is as pressing as ever."

You can help fund grants for Black-owned businesses in Toronto's Little Jamaica here.