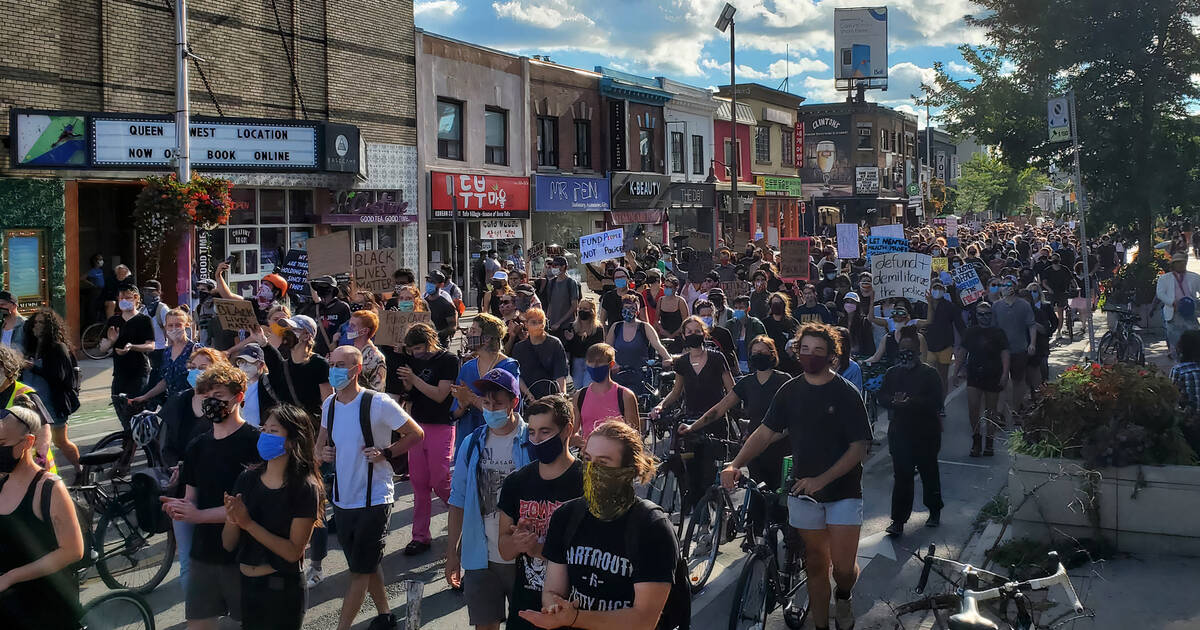 The streets of Toronto were once again teeming with demonstrators over the weekend as residents continued to take civil action against police brutality and race-based violence in law enforcement worldwide.

Calls for defunding the Toronto Police Service have been ongoing, but were revived after the Special Investigations Unit last week found officers were not criminally culpable for the death of Regis Korchinski-Paquet, the 29-year-old Afro-Indigenous woman who fell from a 24th-floor High Park balcony to her death during an interaction with police for a mental health crisis back in May.

The city saw at least 15 organized rallies for that cause and others on Saturday, while the recent deaths of more Black citizens at the hands of police, such as Jacob Blake in Wisconsin, have likewise renewed protests in the U.S. and abroad.

Another busy evening in #Toronto

We had 15 scheduled demonstrations going on in the city throughout the day and evening.

I'm done for the night.

There will be a media officer back in at 7am
^lb

The organizations Not Another Black Life and the Coalition for BIPOC Liberation were behind a number of rallies across Canada over the weekend, including in Toronto, Montreal and Calgary.

The movement demands reducing bloated police budgets and instead allocating funds to non-police frontline personnel such as social workers who can help in crisis situations or confrontations, or things like preventive anti-violence measures, after school programming, counselling and other mental health services.

Marches in Toronto started in public green spaces in the city, with an early afternoon demonstration kicking off at Downsview Park, and another departing from Christie Pits at 4 p.m.

Currently there are 2 large #BLACK #LIVES protests
blocking main streets in TORONTO. A 3rd protest is scheduled for after 4 pm today.#DEFUND the #POLICE is the main call in these protests. pic.twitter.com/MjCnhlOmwU

The Coalition said in a release that the motive behind the events was to "demand our basic human right to live peacefully with the equitable opportunity to live our best lives, take care of our families and support our communities."

Torontonians also marched for a number of other causes over the weekend: a group took to the streets in Little Jamaica to protest gentrifiction and the ongoing Eglinton Crosstown LRT construction — an event that sadly turned violent — while a pocket of midtown residents held a community safety walk, airing their concerns about the contentious new homeless shelters in the neighbourhood.

A group of anti-Pakistan protesters also demonstrated against the genocide of the people of Balochistan on Sunday, demanding UN intervention.