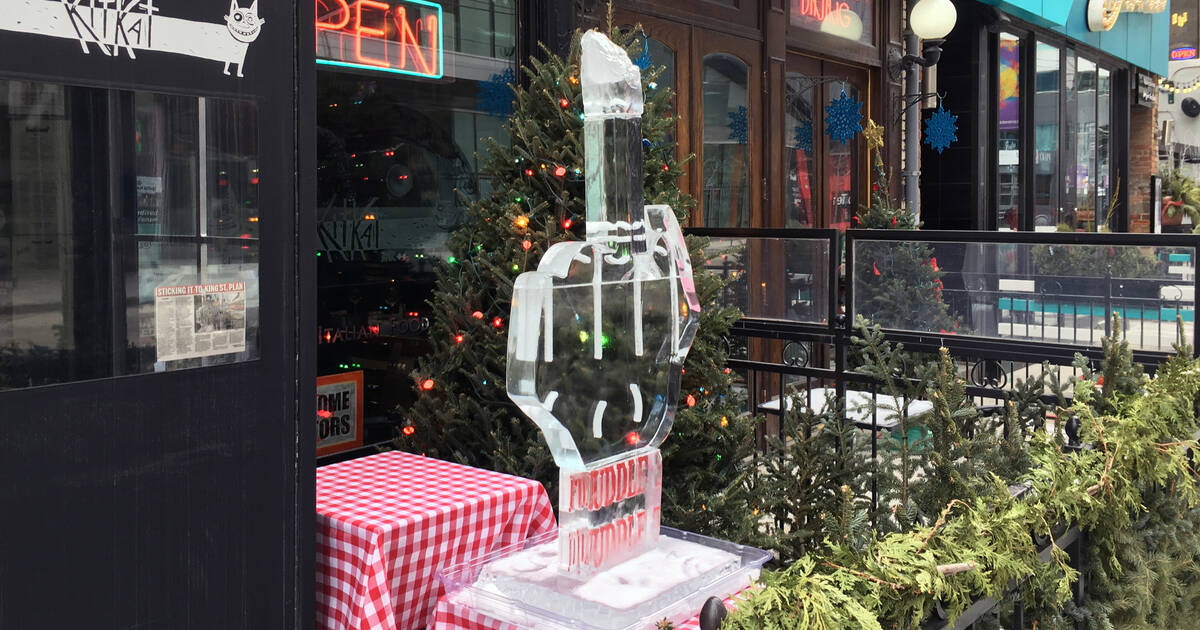 It's far from the first institution to close in recent months, but it is one of the most controversial.

Like every other restaurant in the city, Kit Kat shut down under mandatory closure orders from the provincial government in March, just as the COVID-19 pandemic was starting to heighten.

As of this week, its signange is gone — transected life-sized cow and all. Everything inside appears to have been cleared out.

Owner Al Carbone said that he is unable to comment on the situation at this time, but did not deny the restaurant's permanent closure at 297 King Street West.

...aaaand they’re outta here! The two restaurants that refused to adapt to an evolving downtown and mounted a war against the #KingStreetPilot, complete with middle finger ice sculptures to passing transit riders and residents, have shut down and left. Bye Kit Kat and Nawlings.🖕🏻 pic.twitter.com/3Nes7ZkCQz

Kit Kat, one of the mainstays on King Street's restaurant row, had been adorned inside with myriad pictures of celebrities who'd visited over the years. The business' website still boasts of dishes enjoyed by Shania Twain, Keith Richards, Deepak Chopra, Steven Van Zandt and Donald Sutherland.

"Who knows, maybe you'll see Taylor Swift enjoying Kit Kat fare again on our patio!" reads the website, which has yet to be updated with a notice of the closure.

Swift has not, to my knowledge, been spotted outside Kit Kat, but a series of sassy ice sculptures on the restaurant's patio did make headlines in early 2018.

Carbone first erected a giant middle finger made out ice outside the business on Jan. 15 of that year in protest against the now-permanent King Street Pilot Project.

Well now we will never know if his business has suffered due to the streetcar, or due to this incredibly immature response #TOpoli #KingStreetPilot https://t.co/zuW8vLPy5A

The finger was eventually replaced with two thumbs and the word "VICTORY" after Carbone launched a campaign aimed at eliminating the new traffic restrictions along King Street West. Other unconventional protest activities followed.

Carbone and his supporters (which included city councillor Giorgio Mammoliti and then-mayoral hopeful Doug Ford) used the hashtag #ReverseKingCarBan to decry the pilot at the time, arguing that the elimination of parking spots between Bathurst and Jarvis was killing local businesses.

"The pilot project has already done damage, but it's going to do more damage," he said to blogTO after installing his first ice sculpture, citing losses of 50-60 per cent a day at Kit Kat. "If last week was a recession, this week is a depression, and next week… we don't want to go bankrupt."

In the end, a more efficient streetcar system didn't kill Kit Kat — COVID did. It's killed a lot of other restaurants in recent months as well.

After watching a global pandemic force all local stores to close for nearly five months, the owners of King West's still-existent restaurants may not be so hasty to vilify a public transit project the next time around.