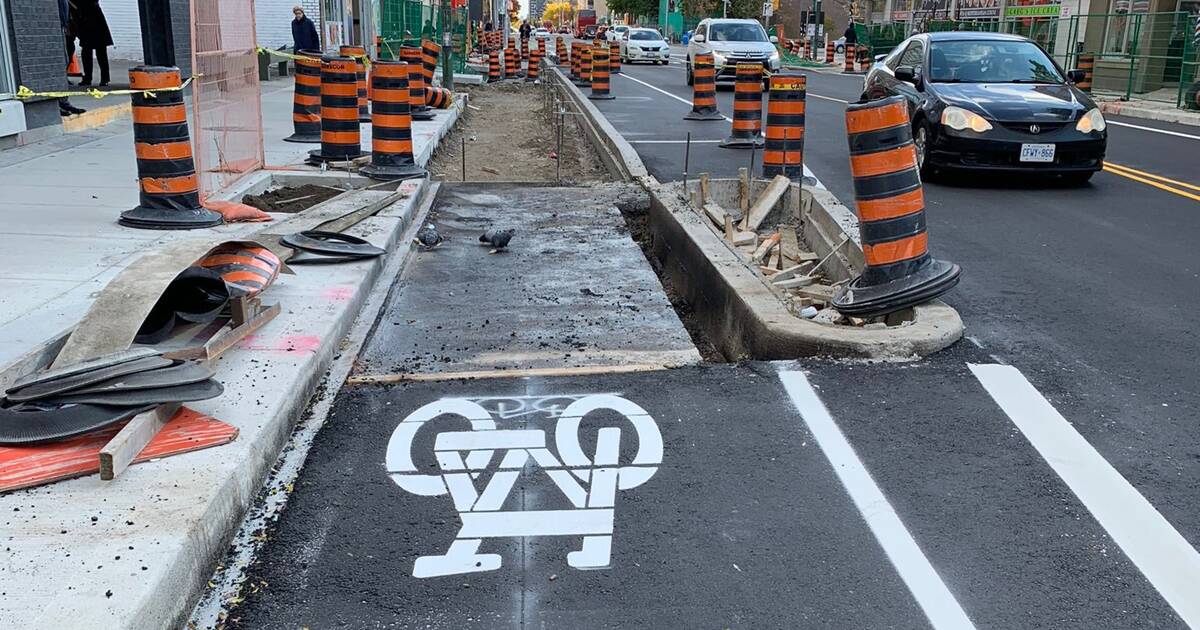 If you live in Toronto, then you know Bloor St. has been under construction all summer long. But the work is finally coming to a close, which means the street finally has a brand new bike lane.

The new raised and separated lane is extremely close to being completed, and some of the concrete was being poured earlier this morning.

"Bloor has been under construction all summer for pipes and resurfacing," Cycle Toronto tweeted this weekend.

"Things are looking up! We spotted a sign of improvements to come. This is a bit of raised and separated bike lane at Spadina to brighten your Saturday!"

Bloor has been under construction all summer for pipes and resurfacing. Things are looking up! We spotted a sign of improvements to come. This is a bit of raised and separated bike lane at Spadina to brighten your Saturday! #BloorLovesBikes #bikeTO pic.twitter.com/wvk942AUdr

A proper bike lane on Bloor. 40 years in the making, but finally nearly here. So very proud to have worked with Mike Layton, @BellsOnBloor and @CycleToronto to finally make this happen. https://t.co/2mXvfk27UB

According to city councillor Mike Layton, the newly-constructed lane sits only on the south side of the street in order to accommodate emergency vehicles.

He also said the construction will extend east next year as more water mains are replaced and then west once a city study is complete in the coming year.

Back in 2017, the city decided to make the separated bike lanes on Bloor between Shaw St. and Avenue Rd. permanent after a year-long pilot project proved successful.

At the time, a city staff report revealed that Bloor lanes were used by more than 5,000 cyclists on an average weekday, making them the second-most travelled bike lanes in the city.

Earlier this summer, city council voted to extend the Bloor bike lane in addition to other lanes all over the city.

The Bloor bike lane is back and, with separation coming, it’s better than before. Now, to expand it West and East. pic.twitter.com/OiemC1GPdi

Toronto residents have long complained about the city's insufficient and dangerous cycling infrastructure, so the new lane on Bloor is just one step toward becoming a more bike-friendly city.

by Mira Miller via blogTO
Posted by Arun Augustin at 2:40 PM