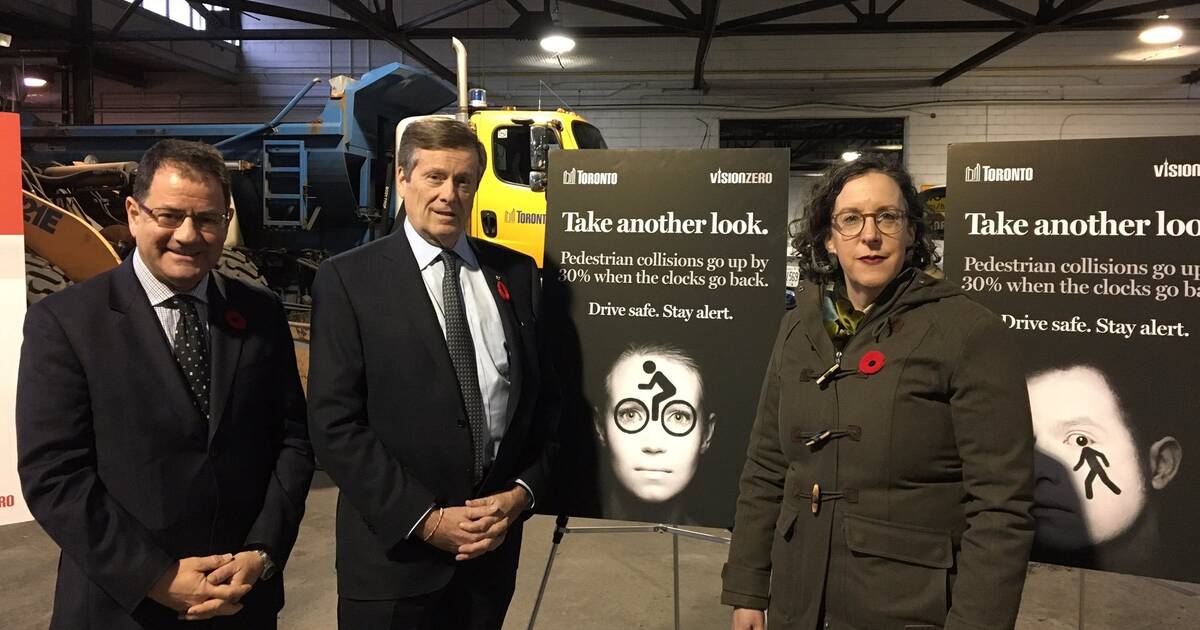 Toronto just launched a new road safety campaign ahead of the dark and stormy winter months in hopes of reducing pedestrian collisions.

The public education campaign — which can be seen online, on TV, on posters in buses, transit shelters and elevator screens in city-owned buildings as well as heard on the radio — challenges drivers to "take another look."

Toronto Mayor John Tory announced the launch of the campaign at a press conference earlier today, saying "this time of year is one of the most dangerous times of year for pedestrians and cyclists."

This morning we launched the #TakeAnotherLook campaign, a city-wide public education campaign promoting road safety as we enter a season with reduced daylight hours. pic.twitter.com/2lwhPtXkRj

According to City statistics, pedestrian injuries and fatalities due to collisions increase by more 30 per cent between November and March, a statistic plastered on many of the ad campaign posters around the city.

Clocks fall back this weekend. Let's get this stat down to 0%, Toronto. #VisionZero pic.twitter.com/0Hs2nwQM6S

During the press conference, Tory said the campaign is inspired by other cities who've had success with similar initiatives, including one in New York City.

The #TakeAnotherLook campaign will be seen all over the city – on bus backs, transit shelters, elevator screens, as well as radio, print & social media ads. This campaign is an approach we’ve seen find success in other cities like New York, resulting in a reduction in fatalities. pic.twitter.com/elAnfdiH8c

The new campaign will also be accompanied by a one-week safety blitz by Toronto Police, where they'll focus their enforcement resources on speeding and impaired, aggressive, and distracted driving.

During this morning's press conference, the mayor also announced a plan to reduce speed limits on 250 kilometres of streets in Toronto by the end of 2019. Almost 50 roads in the city will see speed limit reductions of 10 km/h.

At least 30 pedestrians have died in collision-related accidents so far this year in Toronto. And in 2018, a total of 41 pedestrians and five cyclists died on Toronto's roads, which was a new all-time high for the city.

The campaign, safety blitz and speed limit reductions are all part of Vision Zero 2.0, the city's updated plan to bring collision-related pedestrian and cyclist deaths down to zero.

"As the ad campaign makes clear, we need drivers to pay extra attention," Tory tweeted about the campaign.

"Their behaviour, attention and vigilance when behind the wheel, especially when it is difficult for us all to see on the roads, can and will save lives"