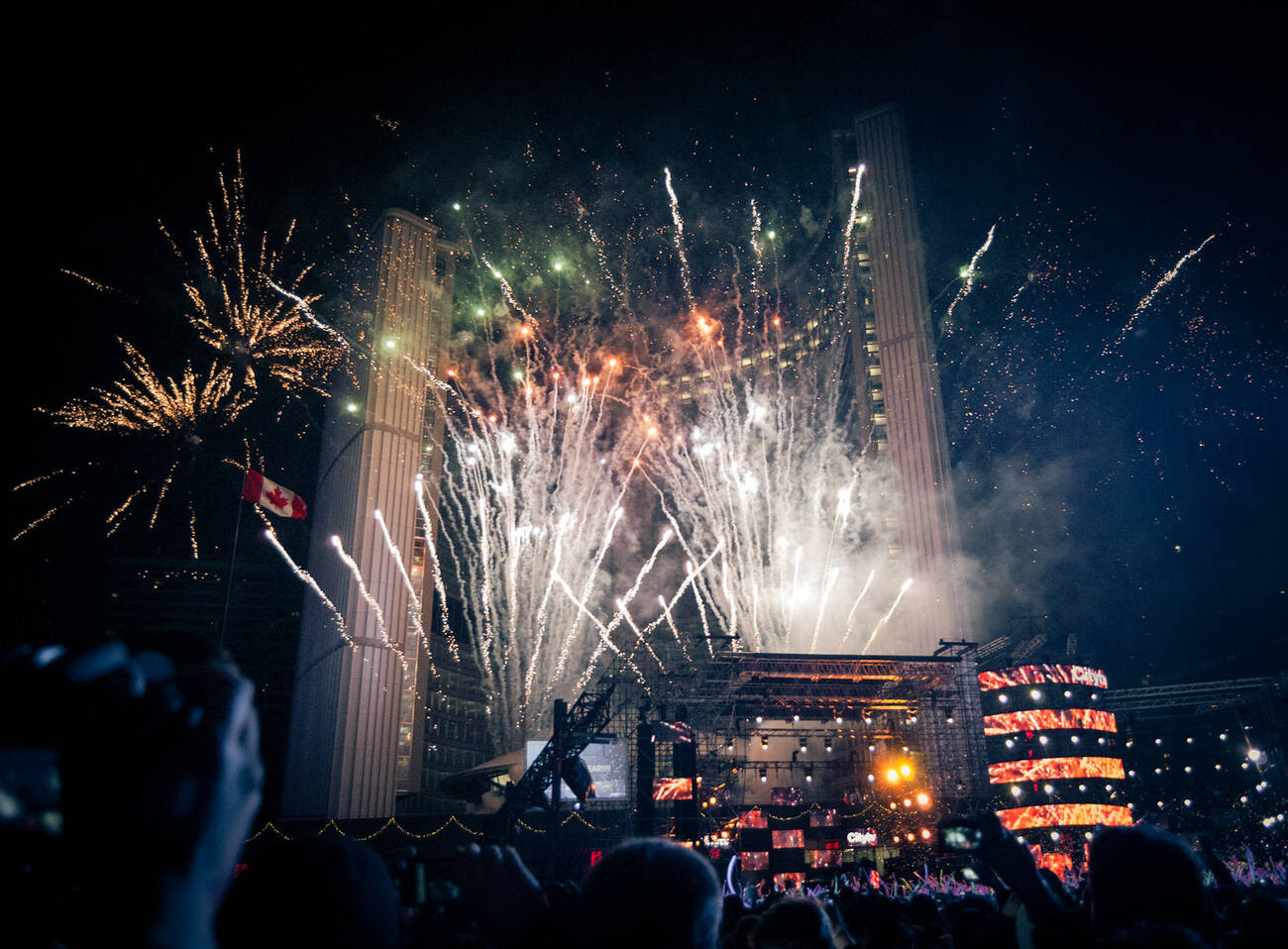 Free events on New Year's Eve are for those of us who don't feel like breaking the bank. They range from massive outdoor parties for big groups, to house party-style celebrations inside bars with no cover and cheap drinks.

DJ Skate Nights: A NYE Ice Skating Jam Named Saturdays (December 31 - January 1 @ Harbourfront Centre)
Count down to the new year by the lake while skating to jams from DJ P-Plus. Bring your own skates or rent them and hit the ice until 2017 strikes!
NYE Nathan Phillips Square (December 31 - January 1 @ Nathan Phillips Square)
This is Toronto's biggest skating and dance party, complete with fireworks and shows.The fun begins around 8 p.m., with DJs, performers, hot chocolate and of course, a countdown to 2017 just before midnight.
NYE 2017 (December 31 - January 1 @ Dundas Video)
In celebration of 2016 coming to and end, Dundas Video is throwing a wild party with cheap drinks, free games, music from Pop Lobster, 3 a.m. last call and no cover.
Not A New Years Eve Party (December 31 - January 1 @ Lansdowne Brewery)
No cover charges, lineups, noisemakers or champagne here, just some of the best beers available from local breweries. This is the spot for Junction Triangle folks who want a no fuss night of cheers-ing.
Crafty Coyote NYE (December 31 - January 1 @ Crafty Coyote)
Recently voted one of the best new pubs in the city, this Annex pub focuses on craft beer and is open for NYE, no reservations and no cover.
Midnight Cowboys (December 31 - January 1 @ Woody's)
Celebrate the new year with a countdown and midnight performance from drag queen Sofonda Cox at this gay cowboy-themed NYE party in the village. There will be eight broncin' buck bartenders to serve y'all as well as DJ Chris Steinbach.
Nightowl NYE (December 31 - January 1 @ Nightowl)
College Street's ultimate arcade bar and cool hang out celebrates NYE in a laid back way. They're open the usual hours starting at 6 p.m. until everyone is done kissing, and also as per usual, there's no cover.
Ski Lodge New Years (December 31 - January 1 @ Farside)
This is the spot if you're in the east and don't want to venture downtown. Farside is ushering oin 2016 properly with a performance from DJ JD playing mutant disco, electro and Italo with no cover! Cheap drinks are available for your convenience.
NYE at The Skyline (December 31 - January 1 @ The Skyline)
Have an old-school diner-style NYE at Parkdale's new fave diner spot. They're open for the big night starting at 5 p.m. and it'll cost you nothing to walk in and have a drink.
Locals Only NYE nothing (December 31 - January 1 @ Locals Only)
Locals Only celebrates not celebrating with anything huge for NYE. Open regular hours starting at 5 p.m. There are half price bottles of wine and buck a shuck oysters until 8 p.m., then it's bar business as usual until 2017.

by Phil Villeneuve via blogTO
Posted by Arun Augustin at 4:28 PM