The top 25 new bars in Toronto by neighbourhood 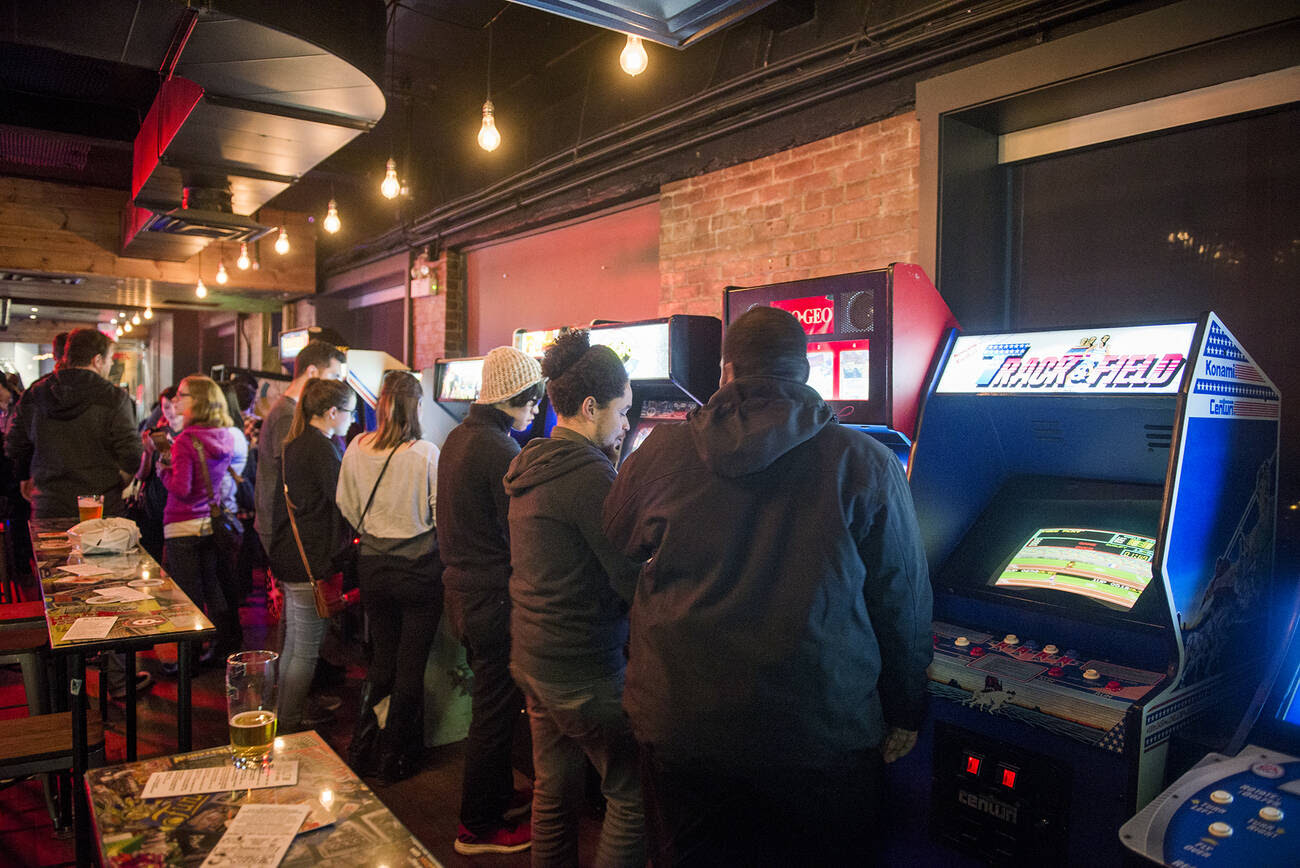 The Toronto bar scene had a good year in 2016. While you may already be familiar with your new local watering hole, here's a guide to help you find someone else’s or simply catch up on these new additions.

Here are my picks for the top new bars in Toronto by neighbourhood.

One of the hottest new bars in the already booze-soaked Annex isn’t just a bar: Tilt is also an arcade. Play classic games like Asteroid or skee ball while downing a pint of local lager, and grab a vegetarian poutine to keep your energy up for all-night gaming.

What was once Wolf Like Me has now become Homestand, a bar but also an extension of Homestand Sports, a hip sports speaker series. Still run by the same folks as Tallboys and Wenona, local beers from Nickel Brook and Side Launch pair with fried mac n’ cheese, ribs, and sliders.

Brewery Blood Brothers exploded onto the scene not too long ago, and now they have their very own taproom on industrial Geary. Taps pour their own rich, smoky, funky, or refreshing beers such as Inner Eye IPA, and pepperoni sticks sell for a buck.

Striker Sports Bar sets itself apart not only by being an actively LGBTQ-friendly sports bar, something that shouldn't be as foreign a concept as it is, but also with a frost rail running the length of the bar that keeps your Coaches Corner maple bourbon cocktails cold all night.

The Dylan’s spirit-forward cocktails pay homage to Dylan Thomas and Bob Dylan. Scotch and whiskey lovers are sure to find something inspiring on the menu, and beer drinkers can ogle the giant beer fridge full of tall cans. Chow down on jerk wings and curry.

Every neighbourhood needs a good dive bar, and Swan Dive knows this so well they actually put the d-word in their name. Pool and straight-up drinks are on offer at this new hangout in an area known for its heavyweight bar scene. 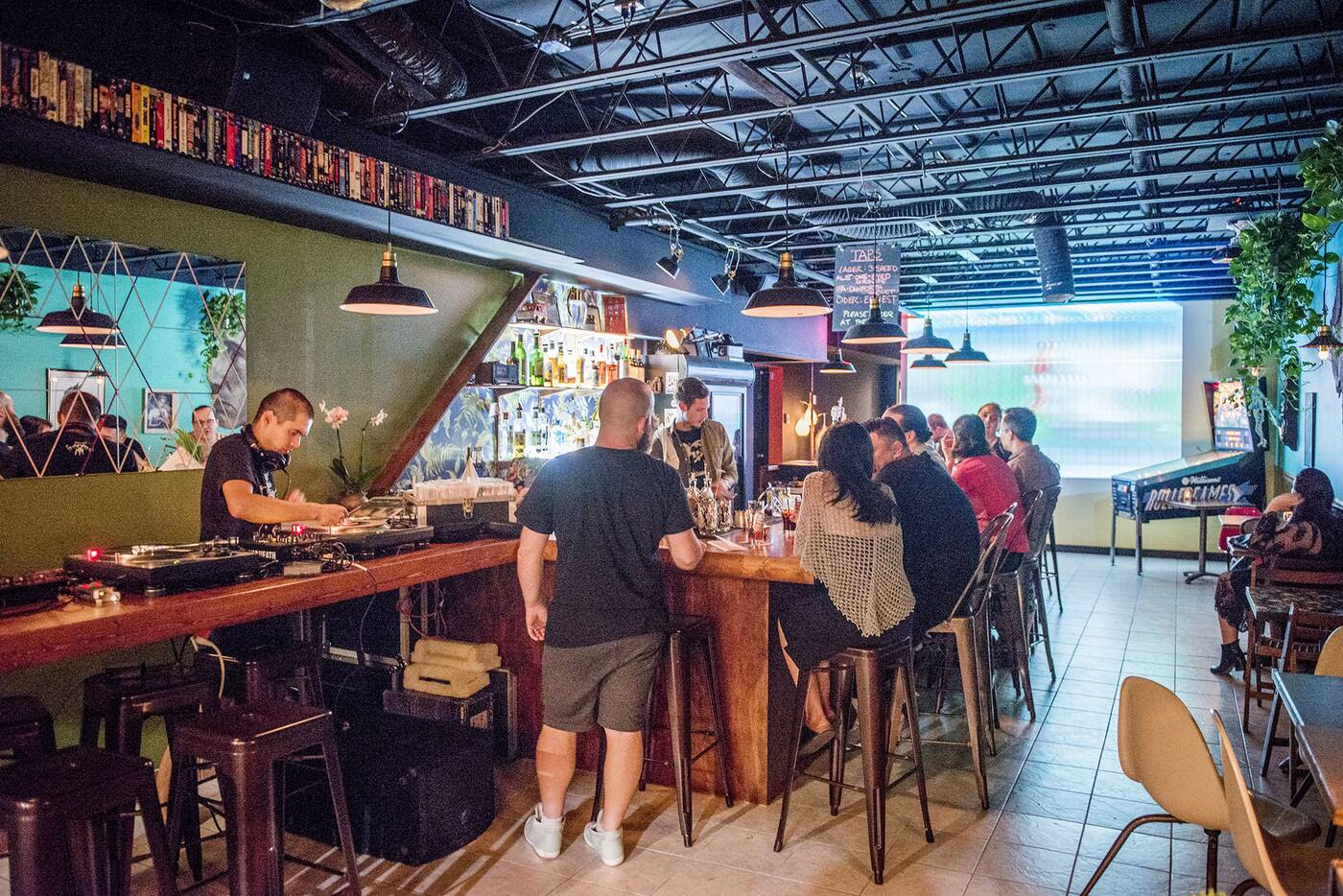 New bar Farside has less to do with Gary Larson and more to do with your perspective on life, or just your perspective on this place’s location if you’re on the other side of town. Chili Gonzalez and Forever 41 cocktails are served up along with pickled eggs and kimchi as well as birthday cake - even if it’s not the day you were born.

Boxcar Social opened a new Harbourfront location this year, every bit as reliable and lovely as the original. This one has a huge number of beers, whopping capacity of 200, and a patio that overlooks the lake.

What goes better with booze than books? New Junction cocktail bar Famous Last Words not only has what is essentially a free library, a record player, and drinks named after your favourite titles, but went super hardcore with a menu that has a table of contents and a glossary.

Henderson Brewing is tucked away on Sterling, but Bloor West residents will know it well as a lifesaver of a bottle shop open late every day. They have an industrial taproom where you can see beer being made that smells delightfully of beer being brewed.

El Rey Mezcal Bar is ready to school you on exactly what mezcal is and how to drink it. With this liquor gaining popularity fast, it’s a boon to Toronto drinkers, and it doesn’t hurt that you can chow down on ceviche and other high-end snack while you sample mezcal from one of over thirty-five on offer. 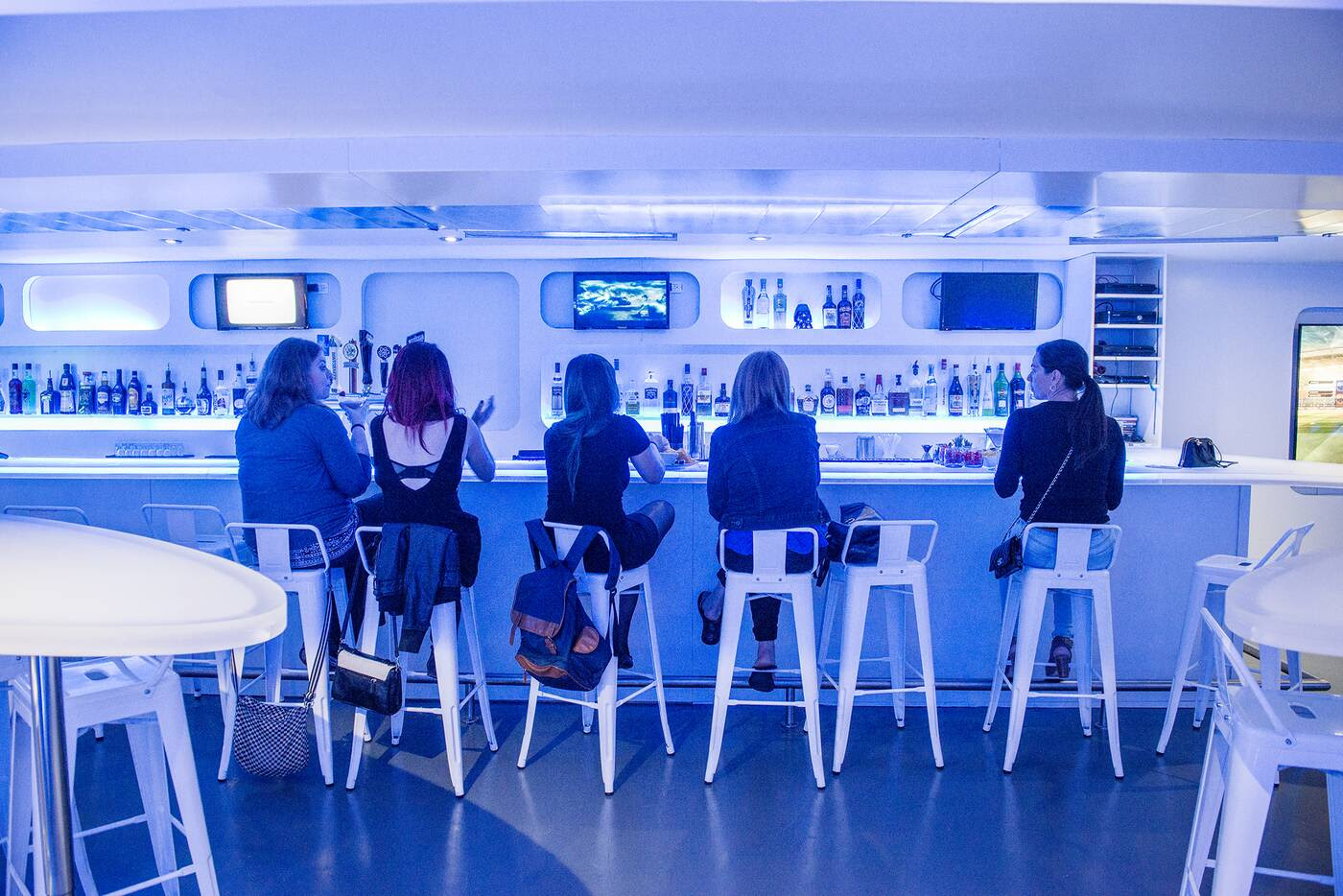 Now I know some of you probably said, I know what goes better with booze than books: video games. Well, you’re not wrong, and this place is probably more your speed. Power Up Game Bar has an array of cocktails, beers, booths with consoles and an interactive dance game.

Locals Only opened up below Home of the Brave this year, and while they don’t have a fried bologna sandwich, they are putting out an awesome menu of mini burritos, fried chicken bites and ceviche, as well as twists on Moscow Mules and Old Fashioneds.

Lloyd’s on Queen is named for the bartender from The Shining, and you can try a signature Jack Torrence cocktail here. Once you’ve downed a Jack-Nicholson-worthy number of those, you can crush a beef patty burger here too.

Though Little Italy is saturated with bars, they’re gonna have to move over for Birreria Volo, the new incarnation of Bar Volo which was forced to move out of its space recently. No sacrifices have been made, though, with an impressive bottle collection, alphabetic array of taps and modest snacks like sardines and lupini beans.

Superpoint is the newest kid on the pizza joint block, but it has a whole other face in the form of SP184, a bar hidden in the back of the restaurant. You enter through the alleyway behind the place, and once inside you’ll be grooving to DJs and throwing back shots and cans of beer. On Fridays and Saturdays you can order from Superpoint’s menu. 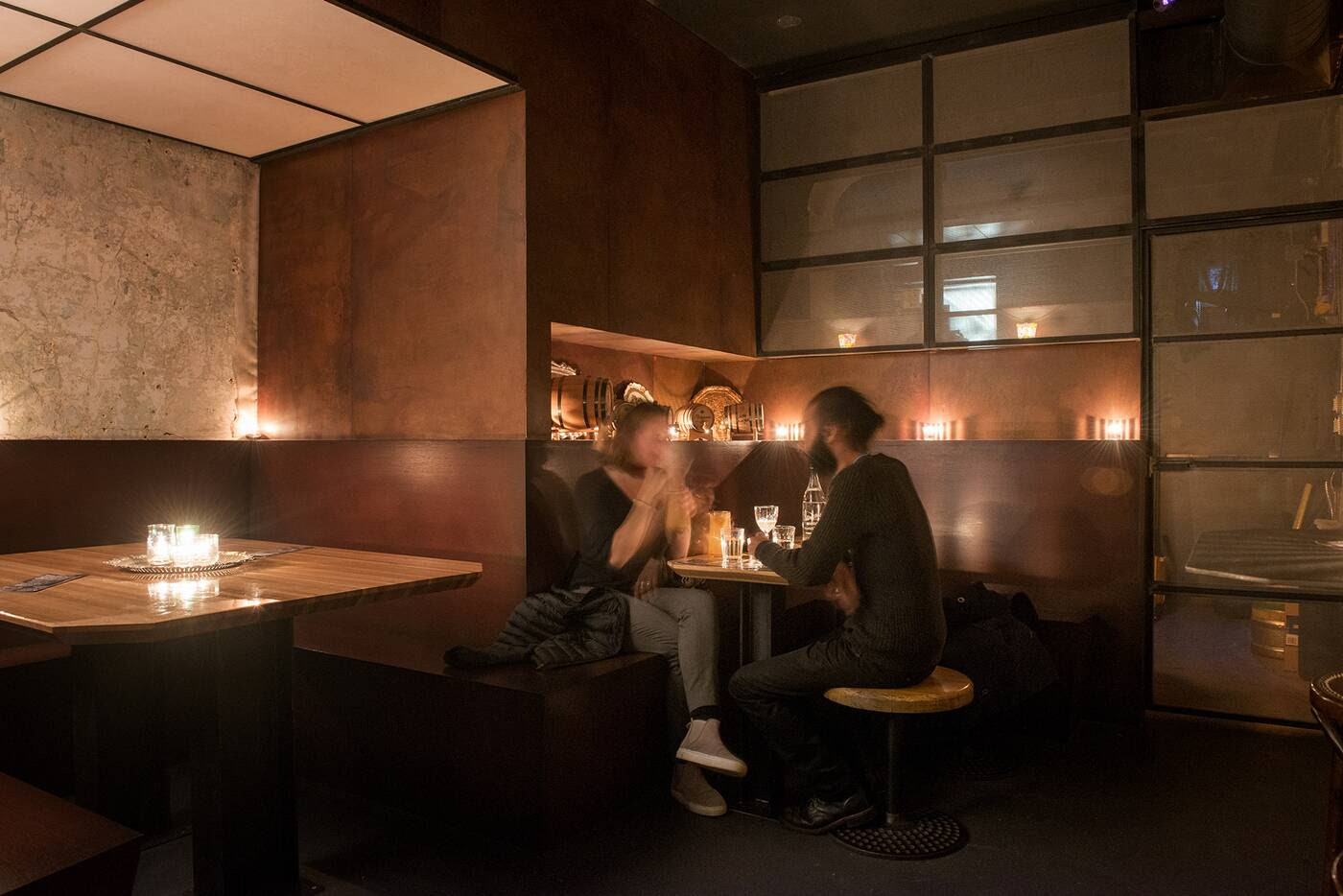 Another bar on a mission to make mezcal your new favourite bevvy, Pretty Ugly is a mezcaleria in the front and a hip high-end cocktail bar in the back. Drinks like the Crystal Lake are topped with a stiff layer of foam and dried dame’s rocket, and their cocktail menu features ingredients that are foraged then carefully combined.

Port Lands’ largest venue has reinvented itself once again as Rebel, and it actually doesn’t suck. A Saturday club night lands you in a world of pricey bottle service and glass box dancers, but overall the powerhouse sound system, large capacity and several bars throughout the venue make it a fine place to take in a major act.

Watson’s has it covered whether you want high-end scotch or a sugary cider, or whether you and a friend want to order from two different places on Foodora. They’ll let you get food delivered right to the restaurant, and provide sports on TV as well as board games.

Apparently KT Bar was actually going to be named Kid’s Table, but they weren’t allowed to imply mixing bar service with minors. This sporty, casual spot serves frito pies along with draft beer. 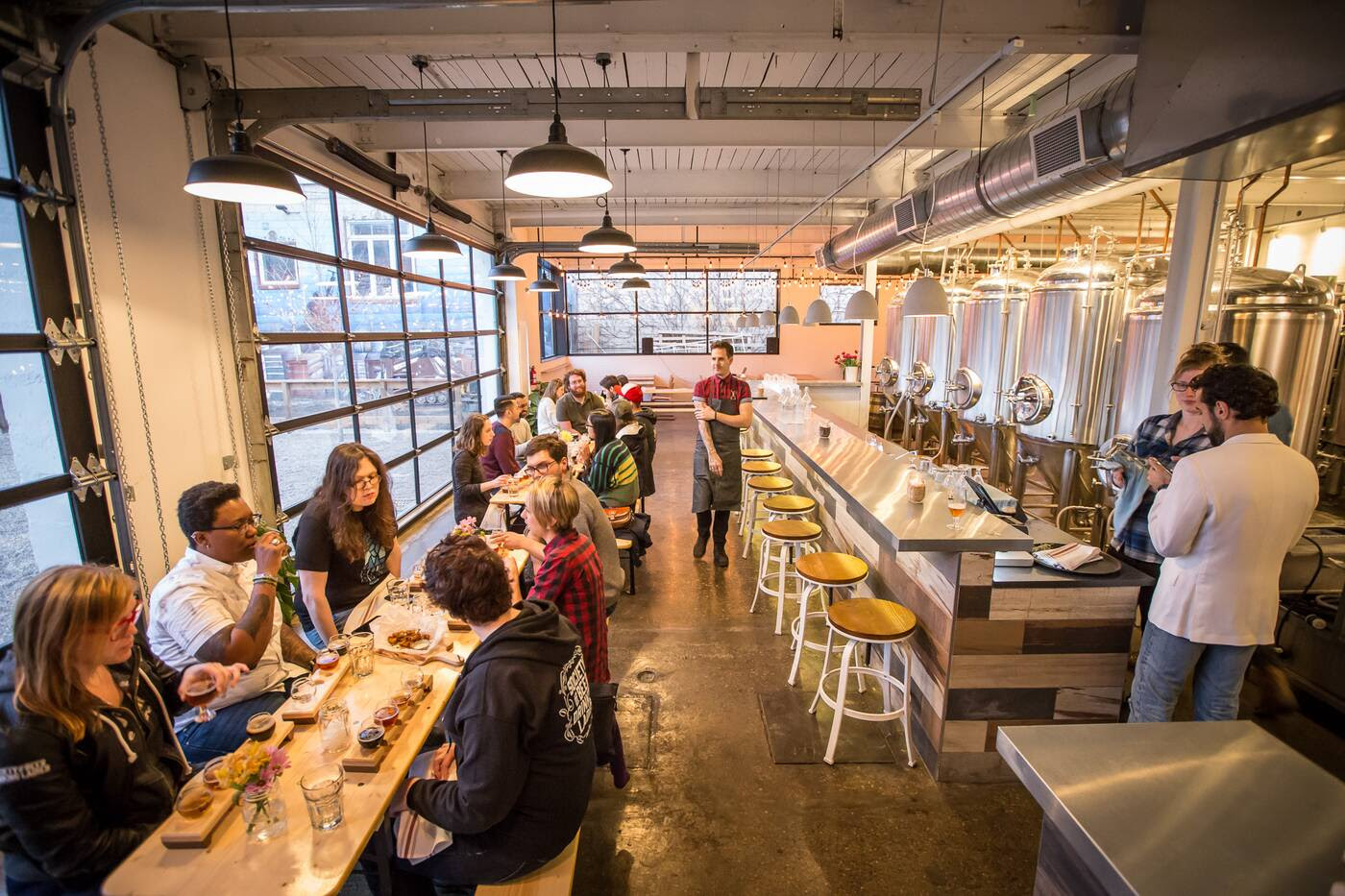 New brewpub Bandit Brewery opened up this year, serving their own beers along with a menu of changing snacks and entrees. They host a ton of events designed to educate Torontonians on beer and food.

Clocktower Bar is another project from the folks behind Boxcar Social, boasting a chic cocktail menu of classics like Manhattans, New York Flips, and Negronis. A selection of cocktails is half-price every single day they’re open.

Bodega Henriette is a true bodega selling wholesome essentials like milk, eggs, and produce, as well as a combo cafe, restaurant and bar. They’re filling a lot of holes in the neighbourhood right now but they’re doing it well, even offering espresso Old Fashioneds that combine the best of both worlds.

Good Fortune is the bar below La Carnita on Eglinton serving up drinks in a similarly brash style with names like Hella Fuego and one called Straight Flossin’ made with Dillon’s gin.

Don’t say we don’t take care of our gamers in this city: one more gaming bar takes the last spot on this list with eRaiders Sports Bar, where players of a slightly different nature can go to live it up. The huge number of TVs and PCs is the wow factor here rather than finicky cocktails or micro-brewed beer.

by Amy Carlberg via blogTO
Posted by Arun Augustin at 9:43 AM