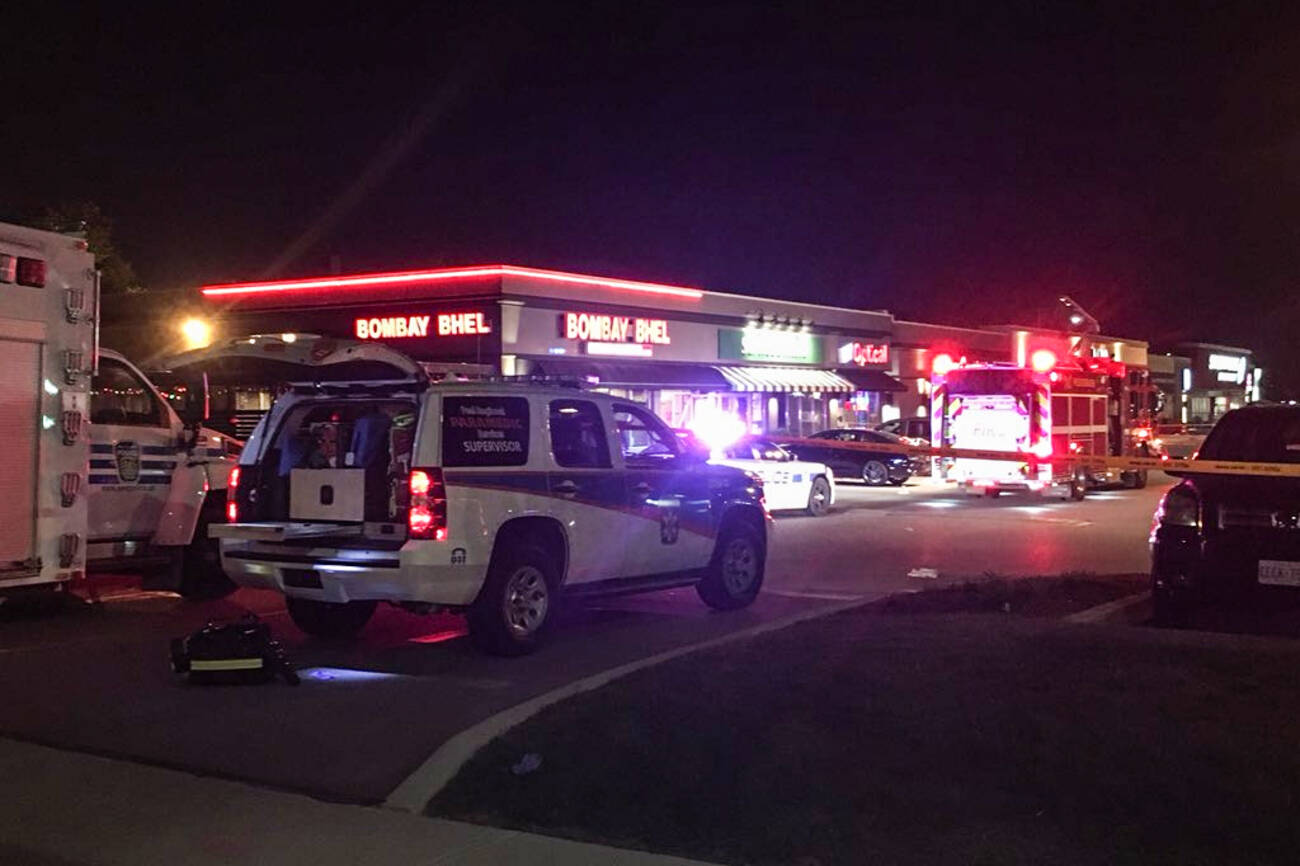 Fifteen people are injured, at least three of them critically, after police say two men detonated an improvised explosive device inside a Mississauga restaurant on Thursday night.

First responders were called to 5035 Hurontario Street around 10:30 p.m. last night after a loud bang was heard coming from the Indian restaurant Bombay Bhel.

Peel Regional Police Chief Jennifer Evans said Friday morning that their conditions had been upgraded to stable. Another 12 victims, ranging in age from 23 to 69, were treated in local hospitals and have since been released.

Pics from the restaurant explosion at Hurontario St & Eglinton Av in #Mississauga. Plaza is sealed off, approx 15 people transported to hospital, 3 critical. Sources saying incendiary devices were found inside the restaurant. pic.twitter.com/b5ZX6NVeSx

Peel Police continue to search for two men in hoodies who were seen entering the restaurant "with an IED" shortly before the explosion, according to Evans.

Security camera footage shows both men walking into Bombay Bhel with their faces covered around 10:32 p.m. Peel police spokesperson Sgt. Matt Bertram said on Thursday night that the suspects entered and exited the restaurant without saying anything.

"It appears they just went in, dropped off this device and took off right away," he said. "Until we can get in there and analyze the material after the search warrant, we won't be able to say what [the explosive device] was."

When asked if the incident was terror related, Evans stressed that police were only starting their investigation.

Evans did reveal that a number of children under the age of 10 were in Bombay Bhel at the time of the attack, possibly for a party, but that none were injured.

Here is the latest update from Canada. The 12 persons who were taken to hospital have been discharged. The other 3 persons who were critically injured are stable. According to Police, at this stage there is no evidence to term this incident as a terrorist attack or hate crime.

"I am in constant touch with our Consul General in Toronto and Indian High Commissioner in Canada," she wrote. "Our missions will work round the clock. The Emergency number is : +1-647-668-4108. Please RT."

Anyone who might have information about the suspects or incident are asked to contact Peel Regional Police.