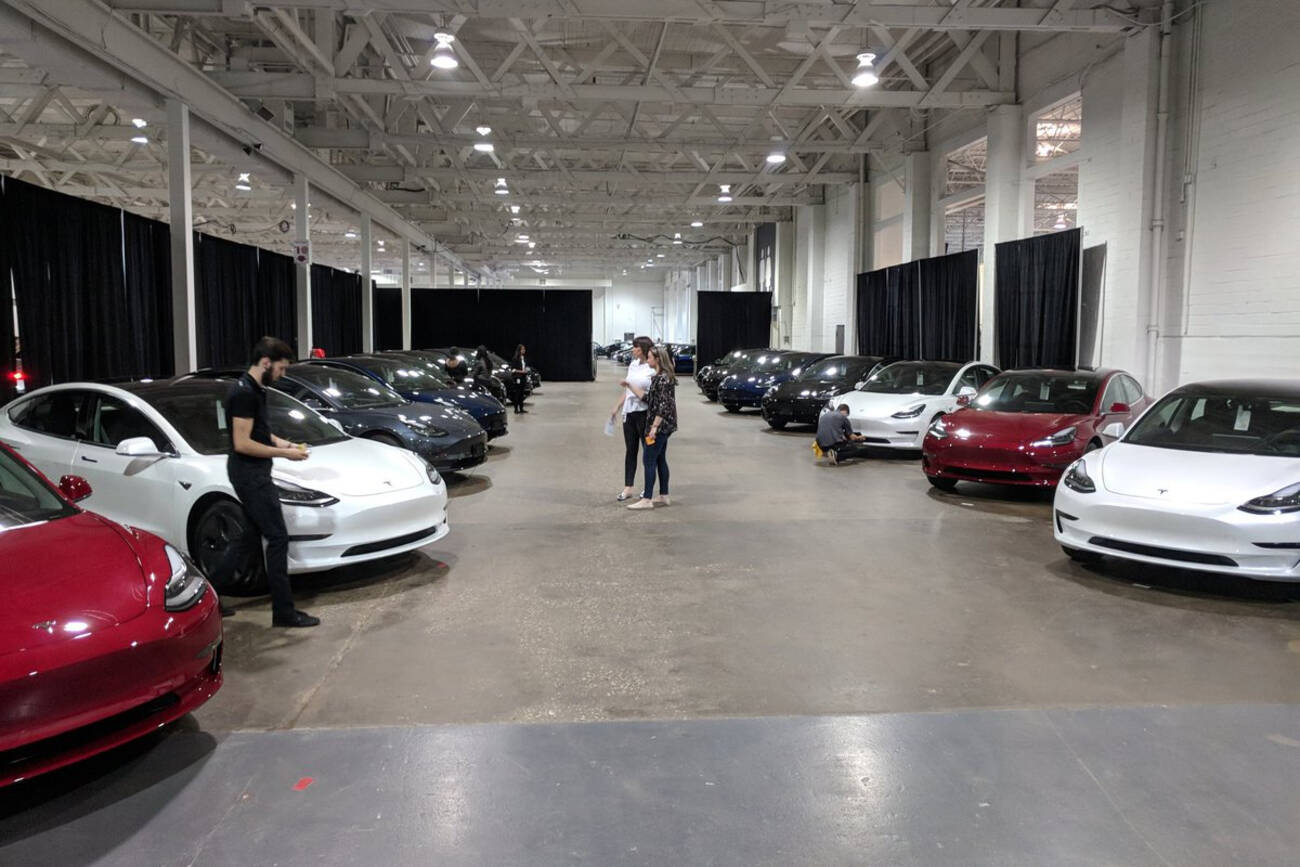 Hundreds of people in Toronto just (finally) got access to the fancy electric cars they paid for up to 26 months ago — and you best believe they're going to be out there, showing those babies off.

Welcome to the new era of Silicon Valley north, where everyone drives a Tesla (or wants to, eventually).

Starting today hundreds of Ontario residents will get their hands on the Tesla #Model3 from the Mass Delivery Center in Toronto, a huge Congratulations to them all for surviving the 26 month process! Also a thank you to @elonmusk & Tesla for delivering this spectacular car! pic.twitter.com/dadsjb6KIO

Canada's first mass delivery of Tesla Model 3s started arriving at the Toronto International Centre last week, with more than 300 cars by some counts — all of them spoken for.

Local enthusiasts were thrilled to watch the centre's parking lots fill up with white, red, black and blue, but customers only started getting access to their long-awaited whips less than 24 hours ago.

Thanks Elon and Tesla Team. Here at Delivery Event in Toronto. 1 day shy of 26 months. Daughter loves it. Oh ya. Me too. #tsla #model3 #loveit pic.twitter.com/MNFgNgHBjU

It looks like Toronto Tesla drivers have been given specific dates as to when they can come to the Mass Delivery Centre.

Some of those who went yesterday reported waiting up to 4 hours to pick up their cars, but many seem pleased with the vehicles they left in.

The Tesla Model 3, which starts at $45,600 before incentives, is marketed as a relatively affordable, mid-size electric sedan (a Model S starts at about $100,000 in Canada, for comparison's sake).

This particular model has been incredibly popular since hitting the market in 2016, hence the years-long wait.

More than 325,000 people had made reservations for the car within one week of its launch, according to Tesla, and at last count it averaged about 1,800 reservations every day.

People who've already picked up their cars in Toronto have been sharing photos and praise on Twitter, but a lot of them — even people who don't have Teslas — seem to be thanking American business magnate (and all around visionary) Elon Musk.

@elonmusk My friend is picking up his Model 3 today in Toronto. Huge day for him. I was calling last night Tesla Eve. Thank you for making one of his dreams come true.

Musk himself retweeted Tesla's main account when it announced the Toronto delivery, but has not replied personally to any customers — which is most understandable for someone with 21.9 million followers and various companies to run.

Dear @elonmusk and @Tesla just picked up the Model 3 in Toronto. All I can say is "WOW". Beyond impressive fit and finish plus tech.

Going to make excuses to drive this beauty. Thanks !

Still, I bet it's a nice distraction from everything else going on in regards to Musk and his Twitter feed.