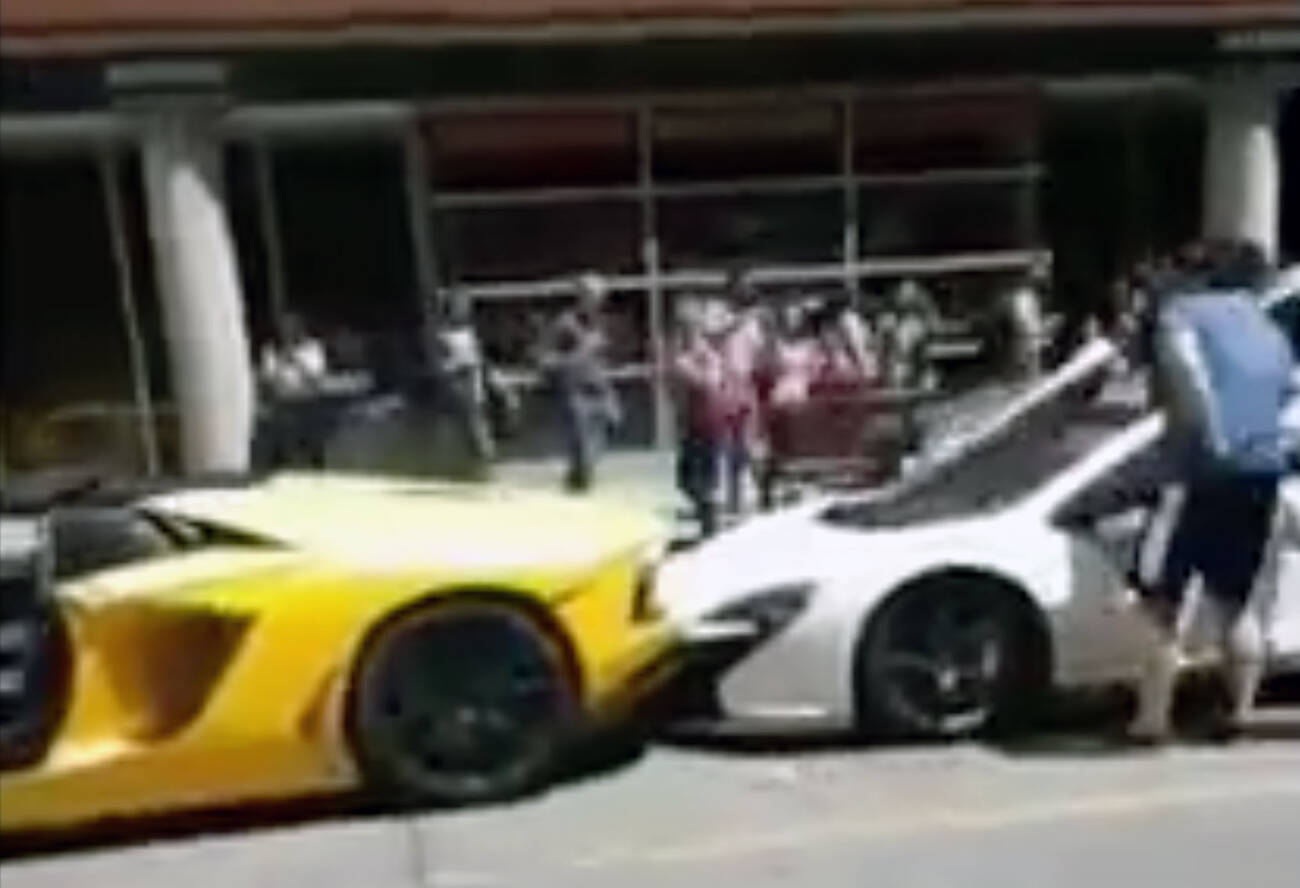 A Porsche driver, a Lamborghini driver and a McLaren driver run into eachother on the streets of Yorkville.

"Ouch!" say all three, and this isn't some dumb corny joke.

Three luxury automobiles can be seen smushed up against each other outside the Toronto Reference Library in a video posted to Facebook on Tuesday afternoon after an alleged fender bender.

A Porsche, Lamborghini and McLaren crash into each other while going for a joyride in #Toronto pic.twitter.com/L9XB7RnkF2

"Daddy's gunna be mad!" reads text across the clip, which was filmed on Yonge Street at Yorkville Avenue in one Toronto's poshest hoods.

In it, a white McLaren 650S Spider is seen wedged against the rear of a yellow Lamborghini Aventador Roadster. A black Porsche 718 Boxster is similarly rammed into the back of the McLaren.

The entire situation is just heartbreaking for those who love exotic cars and money (that Lambo alone sells for up to $850,000).

Those who love hating on gratuitous displays of wealth, however, are having a field day reacting to this very expensive three-way collision.

Hundreds of people have commented on footage from the scene to express their condolences and/or derision since it was first posted by Alex Moseychuk in the Toronto Car Spotting Facebook Group.

"How did you f**k that up?" asked one member in the thread. "When all your brakes are bigger than the car itself and stops on a dime..... oh wait money can’t buy brains."

These guys couldn’t drive a Hyundai let alone a lambo. The rich kids of this city never cease to amaze me.

Some on Twitter are also reporting that they've seen the owners of these cars driving recklessly, together, in and around Toronto.

"Saw these guys warping along Bay & Wellesley this afternoon," wrote one local. "What a bunch of goofs!"

"These guys are in Yorkville every weekend causing s**t," wrote another. "Karma."

@311 and @BloorYorkville These and other vehicles cause excessive noise in the Yonge and Bloor neighbourhood on a regular basis (much of it between 9pm and 1:30am) and “disturb the quiet, peace, rest, enjoyment, comfort of the inhabitants” - Chapter 591 https://t.co/tjCIBAFv9z

Whatever the case, those are some dang beautiful vehicles. It's a shame to see them banged up at all, but something tells me the people who own them can afford to get some body work done.

by Lauren O'Neil via blogTO
Posted by Arun Augustin at 8:23 AM