Someone just created a TTC subway fantasy map to the suburbs 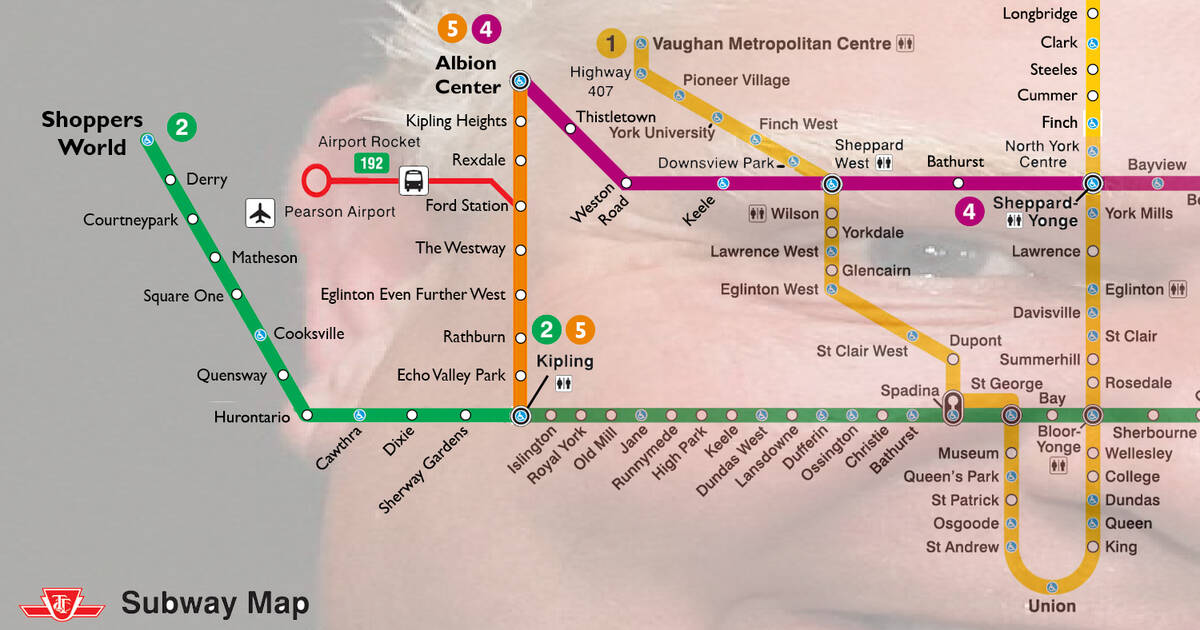 Concrete details have yet to be released about the Premier's grand regional transit plan, or where he would find the tens of billions of dollars it would cost to build subway lines to York, Peel and Durham regions while simultaneously reducing Ontario's roughly $14.5 billion budget deficit.

All we know for sure is that the province intends to take control of the TTC and that Ford once promised "folks in Pickering eventually will be able to hop on a subway and get downtown Toronto."

Cool. So what would Ford's suburban subway system look like?

At least one creative Torontonian has ventured to explore the idea with a new TTC fantasy map that, despite looking pretty real, is rife with hilarious jokes.

The subtle photo background of this Toronto transit fantasy map belies its status as tongue-in-cheek. Image via Redditor u/uarentme.

In this map, the new Kipling line would shoot straight up from Islington Station and run to the Albion Centre in Etobicoke, where the Ford family famously resides. Among the new stations on this line would be "Eglinton Even Further West."

The Rob Ford Memorial Line, named for Dougie's subway-loving younger brother and former Toronto mayor Rob Ford, who passed away in 2016 after leaving an indelible mark on our and our hearts, would run from Etobicoke to Don Mills.

A "Scarborough Durham Line" would extend all the way to Oshawa (with 100 per cent accessible subway stations!) and the newly-extended Bloor-Mississauga-Brampton Line would end at Shoppers World.

A version of the map set to scale shows how truly huge an undertaking it would be to extend the TTC out to Oshawa. Image by uarentme on Reddit.

Conspicuously absent from the new map is Toronto's desperately-needed and long ago promised Downtown Relief Line.